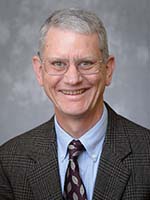 James Mintert is a professor and extension economist in the Department of Agricultural Economics and serves as director of the Center for Commercial Agriculture. Jim joined Purdue’s faculty in 2009 and served as the assistant director of Extension for agriculture and natural resources before taking on his director responsibilities at the Center.

Prior to his time at Purdue, Jim was a professor, livestock marketing economist, and Extension state leader in the Department of Agricultural Economics at Kansas State University for 23 years. He holds bachelor’s and master’s degrees in agricultural economics from Purdue University and a doctorate from the University of Missouri.