Despite an otherwise tumultuous 2020, the agricultural credit markets continued many prior trends. Specifically, interest rates, loan demand, and farm loan delinquencies continued to decrease through 2020. These are positive signs for the agricultural credit market, for lenders and farmers alike. Although under pressure from both trade disruptions and the COVID pandemic, government support payments to the agricultural sector bolstered farm cash flows. This support helped farmers seeking to lower loan balance and to repay a higher percentage of existing lines of credit. This article examines the trends in three key parts of the agricultural credit markets: interest rates, the demand for loans, and non-performing loans. We examine data obtained from the two Federal Reserve banks that serve Indiana. As shown in Figure 1, 68 counties in northern and central Indiana are part of the Federal Reserve Bank of Chicago region, and the remaining 24 counties in southern Indiana are part of the Federal Reserve Bank of St. Louis. 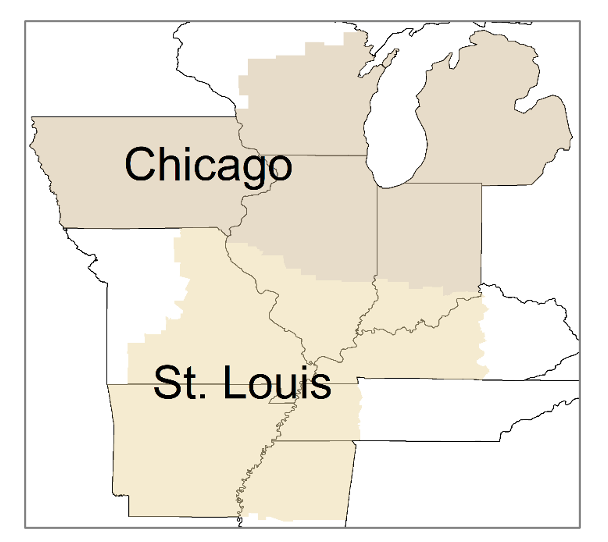 In 2020, interest rates continued the downward trend that started in 2019. Figure 2 plots the average interest rate on farm operating loans since the first quarter of 2015 for both Chicago and St. Louis Fed districts. Farm operating loans are defined as those used primarily to finance current crop production expenses and the care and feeding of livestock (including poultry). The most recent survey results suggest an average interest rate of 5.3% for the St. Louis region and 4.65% for the Chicago region. The rates are the lowest recorded in more than 50 years. 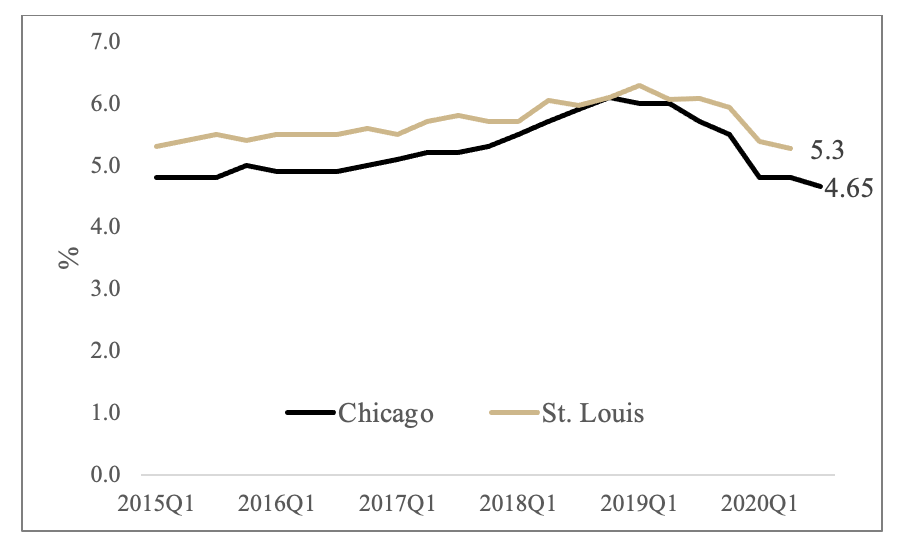 Figure 3 similarly plots the average fixed interest rates on long-term farm real estate loans. The most recent survey results suggest an average farm mortgage rate of 4.8% in the St. Louis Fed district and 4.24% in the Chicago Fed district. Again, the rates are at the lowest recorded in more than 50 years. 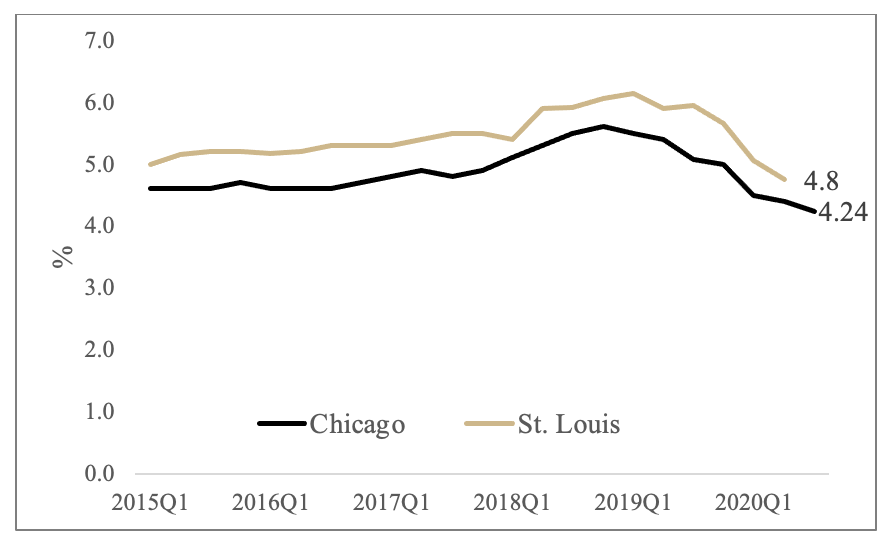 The decline in interest rates through 2020 was aided by the Federal Open Market Committee (FOMC)’s decision to cut the federal funds rate in response to spiking unemployment rates at the onset of the COVID pandemic. The FOMC sets the federal funds rate, the rate at which commercial banks borrow and lend their excess reserves to each other overnight, in an effort to control unemployment and inflation. Previously, the Fed has held an inflation target of 2%. However, the Fed recently changed its stance on inflation and is willing to allow inflation to rise above 2%. At the conclusion of the most recent FOMC meeting, Federal Reserve Chairman Powell reiterated that the fed funds rate would remain at current levels until the overall economy reached maximum employment and reached the inflation target. This provides a relatively robust signal that low interest rates will likely continue in 2021.

The Federal Reserve Bank surveys ask agricultural bankers to rate the demand for loans at their institution relative to a year earlier. Respondents report whether the demand for loans is “higher,” “lower,” or the “same.” These responses are summarized by a loan demand index, calculated as the share of lenders reporting “higher” minus those reporting “lower” plus 100. Thus, when the loan demand index is less than 100, the demand for agricultural loans is decreasing. Figure 4 shows that the demand for agricultural loans decreased in 2020 relative to 2019. This is the first period of declining loan demand since 2013. This finding is consistent with aggregate financial information reported by the USDA ERS’ Farm Income and Wealth Statistics, which showed lower levels of capital purchases, such as equipment and land. 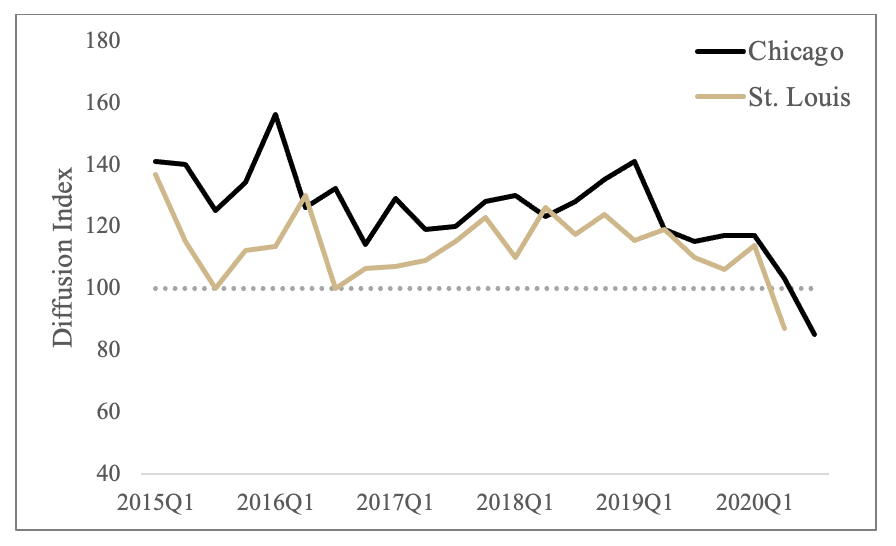 It should be noted that agricultural banks are well positioned for an increase in loan demand as agricultural lenders are reporting a higher amount of available funds to loan than in previous years. The similarly constructed funds availability index for both Federal Reserve Banks is plotted in Figure 5. 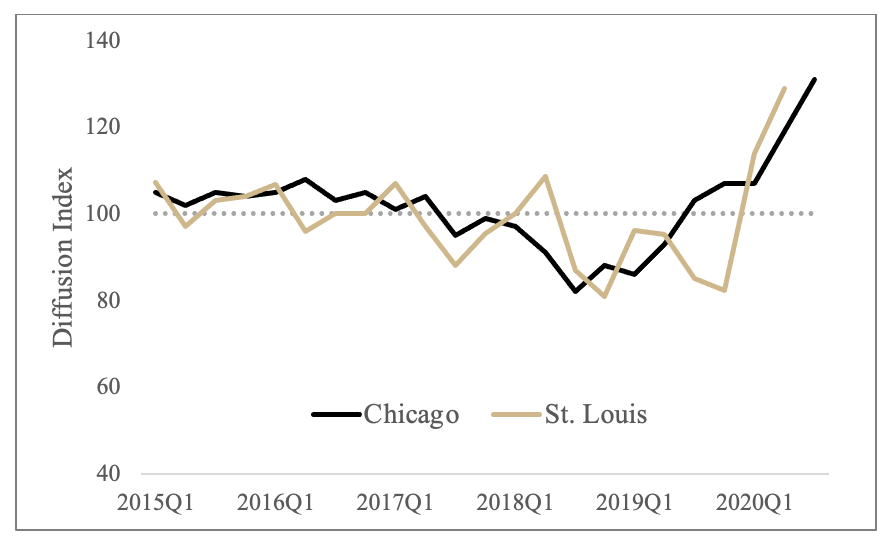 Farmers’ rate of loan repayment also improved in 2020, continuing a trend that began in 2013. The index is similarly constructed based on lenders reported repayment rates relative to the same quarter of the previous year. Given that the loan repayment rate indexes for both Chicago and St. Louis Fed surveys is below 100, the indexes suggest that farmers were able to pay off a greater portion of their debt. While the index is remains below 100 in Chicago, the repayment index is at the highest level since 2012. This suggests that repayment rates may be slowing across the region. 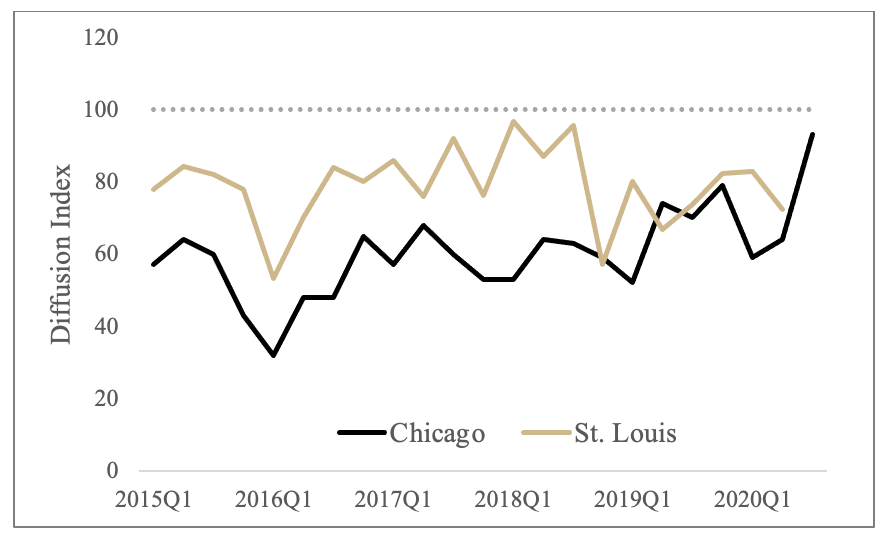 A key component of loan repayment is net farm income. According to the USDA ERS, as much as 40% of a farmer’s 2020 income will come from direct government payments. This represented a 64% increase in the proportion of a farmer’s income that comes from government sources from 2019. The degree to which farmers can expect (or require) similar payments in 2021 is uncertain. The uncertainty is a result of many factors, most notably the lingering impacts of the COVID pandemic across the agricultural sector. Obviously, there is always a possibility that a decrease in revenue is not matched with an ad hoc program payment, but in a time of lower working capital, it could have an impact on a farmers ability to repay their debts.

Overall, the agricultural credit market is riding several positive trends into 2021. Farmers are likely optimistic that interest rates will remain at or near all time lows, which supports the acquisition of new capital assets. If farm loan demand increases, banks appear to have a sufficient stockpile of funds available to loan. Lenders will also be encouraged by the farmers’ loan repayment rates. While there is a high degree of uncertainty in commodity markets due to a number of factors, including the COVID pandemic and continued trade disruptions, the credit markets look to be well positioned in 2021.