With the expiration of current farm bill in 2018, Agriculture policy could have numerous important changes for agricultural. Continuing debates on national immigration and health care will have significant impacts on farm operations and households that employ migrant labor or use private insurance markets. Continuing negotiations on the North American Free Trade Agreement (NAFTA) will determine how much access the U.S. enjoys to the increasingly important export demands of our continental neighbors. Any of these issues may have critical bearing on a particular farm family, region, or commodity market. The new farm bill will bring together the varied interests around farm profitability, conservation, and low-income assistance. This article will focus on the discussions and the political compromises that will be needed to form the next farm bill.

Both the difficult passage of the 2014 Farm Bill and the difficulties of passing new legislation on health care or taxes during the 2017 calendar year with a single party government are instructive in considering new farm bill legislation. The 2014 Farm Bill replaced its 2008 predecessor only after both the 112th (2011-2012) and 113th (2013-2014) Congresses failed to promptly replace expiring legislation. Farm bill policies in 2013 were maintained through an extension of the 2008 Farm Bill and the February 2014 passage of the farm bill was made retroactive to October 2013’s lapse of the extended 2008 Farm Bill.

The 2014 Farm Bill (and its failed precursors) was notable for the broad legislative agreement to drastically reform the commodity payments system in the US. It dispensed with fixed direct payments to producers in favor of counter-cyclical options that tied payment levels to market performance. However, the total cost of the legislation, particularly the large commitment to nutritional assistance was contentious. As compromise positions moved closer to sustaining funds for nutrition assistance, a portion of the Republican caucus sought to ‘split’ the farm bill into two pieces, allowing separate legislation for farm support and for nutrition assistance.

The division within the Republican caucus has continued to be on display during the 115th (2017-2018) Congress. Government funding bills have set pragmatists against deficit hawks within the party. Multiple attempts at health care legislation fell short in the 115th Congress despite the use of reconciliation rules that allowed Republican majori- ties to vote for repeal of the Affordable Care Act (ACA) unabated by the opposition. Tax reform, which like ACA repeal enjoys strong general support in the Republican caucus, has similarly proved difficult to get agreement.

Heading into 2018, it is unclear if taxes and health care will remain legislative priorities that consume debate time and crowd out farm bill discussion. What is clear is that the farm bill is set to expire and presents some thorny policy questions that will need to be reconciled.

A number of important questions will surface in the farm bill debate, but if history is any indication the federal budget impact will be front and center. At its passage in 2014, the current farm bill was expected to cost approximately $490 billion over 5 years. As the economy and employment improved, outlays for nutrition assistance declined and current estimates indicate that the five-year cost may be closer to $450 billion. Looking ahead, the current set of policies will be used with assumptions about the US economy’s performance to calculate a spending baseline. Figure 1 shows the 2018 – 2027 projected annual spending for the four main cost items (note that Title IV Nutrition is plotted against the right hand vertical axis) in the farm bill. 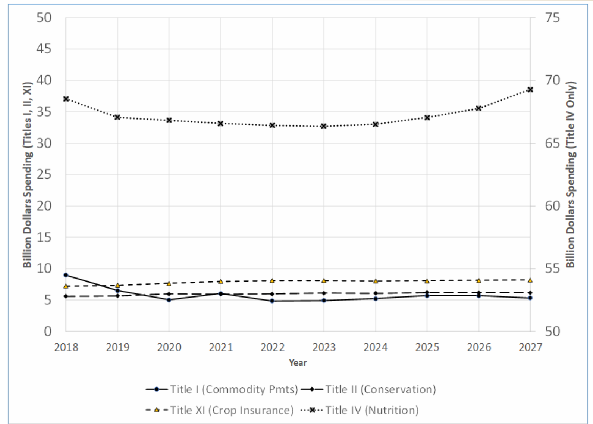 The projection shows both commodity payments (Title I) and nutrition (Title IV) declining for much of the ten-year projection period. A new March 2018 CBO forecast will replace the current numbers in Figure 1, but is expected to yield a similar budget picture that will require any farm bill changes to stay within the lower projected costs of continuing the exact policies as enacted in 2014. This pay-as-you-go provision means that in writing the farm bill any increases must be met with offsets in the same legislation to keep the bill on budget.

The nutrition title carries the most budget weight and is the most likely target for smaller spending to reduce the deficit. However, many of the urban district votes cast for the farm bill are primarily earned by the commitment to supporting low-income households through nutrition assistance. Fights over the level of nutrition spending and whether to keep it tied to farm and conservation programs moved to the forefront in the summer of 2013. This led some to speculate that the 2014 Farm Bill could be the last of its kind. The potential to split the farm bill resurfaces regularly in the majority caucus but gaining the votes to pass a standalone farm safety net is not realistic. All of this means the 2018 Farm Bill will most likely be written with a lower spending baseline that will provided limited flexibility to improve farm incomes that are expected to continue to decline.

What avenues exist for reforming the farm bill then? There are a number of options that will likely be pursued subject to the budget constraints.

Both the nutrition and commodity titles have critics that would like to see targeting of government payments to poorest households and at-risk farm businesses. In a growing economy with strong job creation, efforts to reduce waste or tighten eligibility requirements to qualify for nutrition assistance may find favor. Efforts to means test farm commodity assistance have largely been ineffective, but may be a bargaining chip that earns support from law- makers that prefer that farm payments function as credible income support rather than market price support.

During 2017 summer listening sessions, a number of priorities for reforming the implementation of 2014 Farm Bill commodity programs surfaced. Foremost among these are the methods of supporting cotton and dairy, two powerful commodity lobbies that have been frustrated by both the domestic farm policy and U.S. trade policy. Traditional row crops in the farm bill have been supported under two alternatives, price loss coverage (PLC) and agricultural risk coverage (ARC).

Farmers were afforded the option of enrolling their crops in either alternative for the life of the farm bill and would likely be handed such an option again. The ARC option has been sharply critiqued for the lack of uniformity in determining county yields as the basis of payments and will likely require direction from Congress to achieve consistency. This may be a relatively minor point if new legislation affords farm operators their choice of program because commodity price outlooks strongly favor more shifting to PLC for payments.

Under the 2014 Farm Bill, payments for crops cannot be made until the end of the marketing year for a particular crop. This significantly delays the receipt of funds to support income in a weak market year. Past farm legislation has featured provisions for partial up-front payments based on estimated prices that could alleviate some of the economic stress fostered by the delay.

Farmers are paid on base acres with a fixed allocation to historically grown crops under both the PLC and ARC programs. The implementation of the 2014 Farm Bill allowed producers to set that allocation using most recent planting information. New farm legislation that allowed a fresh update would allow farms to choose the payment basis that best matches their sources of farm earnings.

Listening sessions and commentary from 2017 have focused very little on the ARC and PLC programs’ statutory details that trigger payments. Depending on the budget outlook in March 2018 there may be some room to move statutory support prices to align with market outlook or to make it easier for ARC payments to trigger when prices fall. The final specifics on these programs will be among the last items hammered out as they are balanced to fit into the baseline by adjusting their levels or the number of years that higher support levels are mandated in the ten- year budget window.

In many ways, the 2014 Farm Bill represented a culmination of the long process of codifying Congress’ predilection for emergency and disaster assistance to the farm sector. The 1996 Farm Bill’s non-belief in current markets or incomes setting payment levels was quickly reversed with ad hoc emergency payments when commodity markets stumbled. Each successive farm bill since 1996 has favored increased use of counter-cyclical mechanisms that produce the largest transfers to farms in the weakest marketing years. With the 2014 Farm Bill’s payments triggered by worsening markets the foundations of commodity support going into 2018 policy discussions seem to be set. Small changes from the 2014 bill are far more likely for primary commodity support. If so, farmers’ choices in a 2018 bill may look familiar as they consider the policy and management implications.

Much like the 2012 and 2013 farm bill debate years, the macro-factors of balancing the multiple spending priorities and overall budget effect in a deficit environment are far more uncertain. After a frustrated effort to repeal and replace ACA in the spring of 2017, it seemed like momentum was building for an expedited farm bill to show some progress on the legislative calendar. Discussions of August to October hearings, mark-up, and score fell by the wayside as health care resurfaced alongside funding the government, and tax reform. Thus, no progress was made on the new farm bill.

This sets the stage for 2018 where the prospects of farm bill passage seem increasingly remote. All proposals for tax reform that have been considered to date increase the deficit by at least $1 trillion over 10 years. The Republican caucus seems committed to cutting the revenue side of government by tax reform, making it more likely that spending authorizations will be reduced in new farm legislation providing an additional challenge to the lingering tensions that inhibited the process five years ago. If time does run out on the 2014 Farm Bill triggering reversion to the various permanent law measures, there is some assurance in the recent experience that a swift extension of cur- rent law would keep farmers from dealing with significant uncertainty until replacement legislation can be passed.