Increasing the Value of Manure with a Variable Rate Fertilization Program

VRA fertilizer has become quite common since it was first introduced in the late 1980s. Variable rate manure (VRM) has only recently been introduced. Over half of all fertilizer retailers in the U.S. offer some kind of computer controlled VRA. Most Corn Belt farmers have access to this service. The most recent USDA estimates indicate that about 11%of all corn received some VRA fertilizer in 2000. There are at least six companies that currently manufacture variable rate manure application equipment.

The variable rate manure experiment was conducted in cooperation with the University of Minnesota and Christensen Farms, near Sleepy Eye, Minnesota. Corn grown during the 1999 season was followed by soybean in 2000. Four rates of liquid swine manure, including a check strip (0, 2000, 4000, 6000, and 8000 gal/acre) were applied over a 10.7 acre field in constant rate strips. Manure was only applied before the corn-growing season. One manure sample was taken from every load at the beginning of the application. This sample was analyzed for nitrogen (N), phosphorous (P), and potassium (K) content. No manure was applied prior to planting soybean. Manure was applied via surface broadcast and immediate incorporation with double discs attached to the applicator. Yield data was collected in 50 foot segments for corn and soybean crops. Grain yield was measured from the center row of each treatment strip using a Massey Ferguson plot combine equipped with a ground distance monitor and computerized Harvest Master weigh-all (Harvest Master, Logon Utah). Every 50 feet, the combine was stopped and the harvest grain weighed.

Site-specific crop response to manure was estimated for management zones based on phosphorous soil test levels (Figure 1). This zonation makes sense because: (1) the candidate management zones are supported by University of Minnesota extension recommendations; (2) P is a convenient proxy since it correlates strongly with zinc (Zn), pH, and %organic matter (%OM) soil tests; and (3) P is a manageable input that has been well-studied in extension and agronomic literature.

In the economic analysis, whole field management and variable rate manure strategies are combined with one of three soil fertility management strategies: (1) do nothing 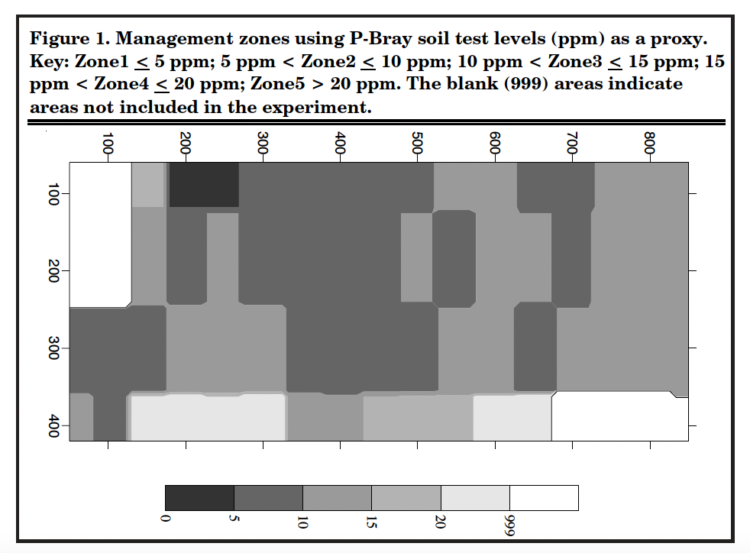 Estimating net Present Value Because manure application, fertilizer spreading and harvest occur in the data over a two year period, the analysis relies on net present value (NPV) to allow for the time value of money.  In general NPV discounts costs and returns by a factor that depends on the cost of capital (also known as the discount rate) and the time at which the cost or revenue occurs. Specifically the discount factor is (1+r)-t, where r is the cost of and t is the number of years since the first manure or fertilizer was applied.  In this case the NPV is discounted revenue from corn, minus manure application costs, plus discounted revenue from soybeans, minus information costs, the variable rate application fee and fertilizer cost. The discount rate used in this report is 7.5%.

Statistical analysis of the manure nutrient contents revealed that although the gallons applied manure per treatment are known, the manure N, P, and K content varies (Figure 2). Error bars in Figure 2 show the range of nutrient application for a given application rate. N and K were very consistent sample to sample, but P content varied widely. In particular the 6000 gallon manure application sometimes applied more P than the 8000 gallon treatment. 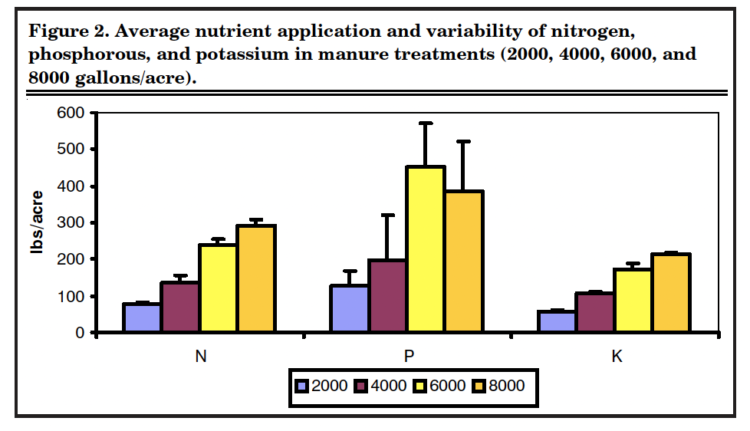 Figure 2. Average nutrient application and variability of nitrogen, phosphorous, and potassium in manure treatments (2000, 4000, 6000, and 8000 gallons/acre). 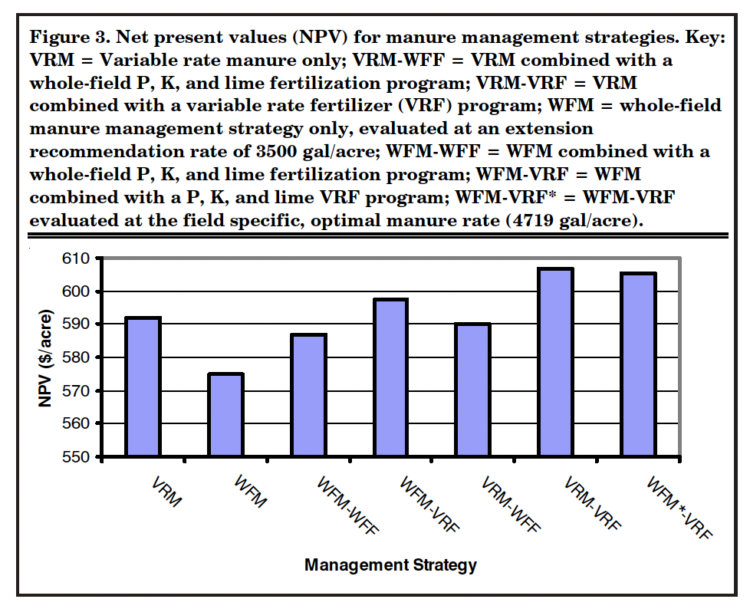 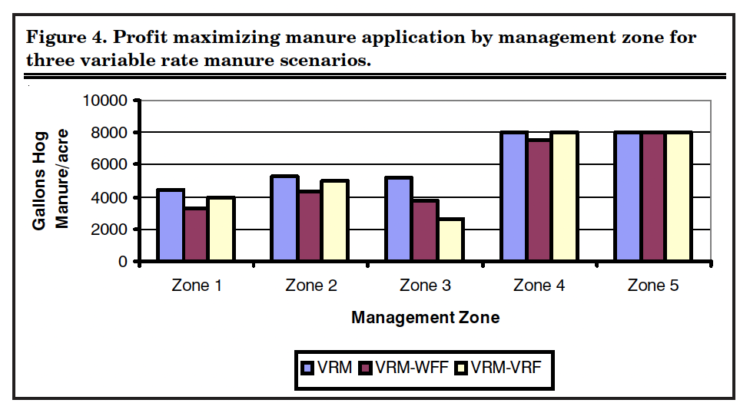 Given the variability of the nutrient content of manure, it is difficult to argue that the VRM-VRF strategy is a better strategy than the WFM strategy combined with variable rate fertilizer program. The WFM-VRF strategy results in an NPV that is only about two dollars/acre lower than the VRM-VRF approach. Statistically, they are not significantly different.  With good agitation and careful calibration, a uniform application of manure is a reasonable goal. With current technology, accurate VRA of manure quantity is possible, but it is difficult to control the actual soil nutrients applied. VRF can be used to more economically and accurately manage soil variability.