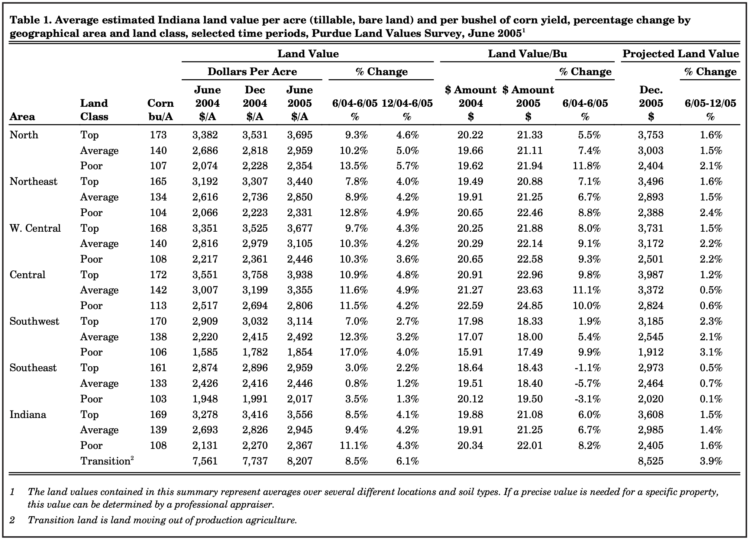 Part of the difference in land values reflects productivity differences. As a measure of productivity, survey respondents provide an estimate of long-term corn yields. The average reported yield was 108, 139, and 169 bushels per acre, respectively for poor, average, and top land. The value per bushel for different land qualities was very similar, ranging from $21.08 to $22.01 per bushel. 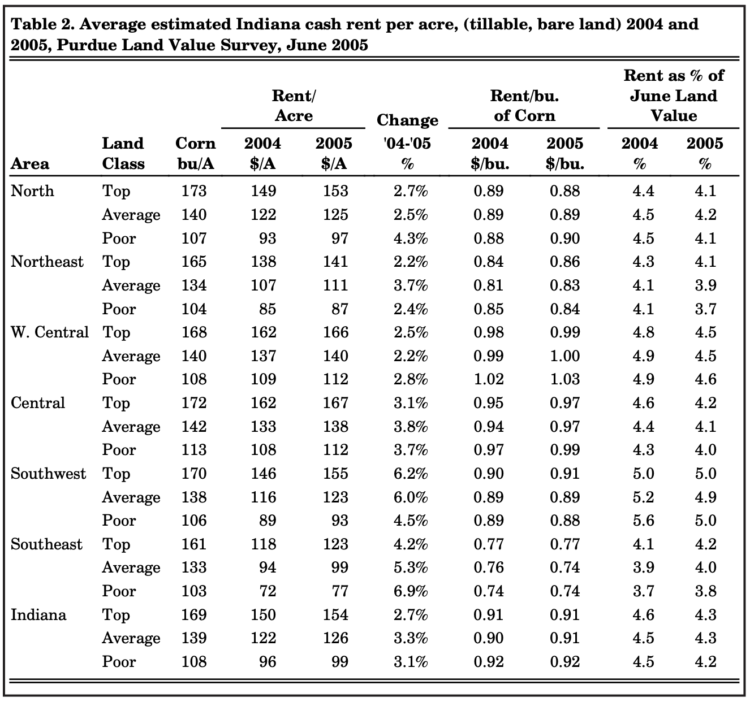 Survey responses were orga- nized into six geographic regions of Indiana (Figure 1). In past years, there have been definite geographic differences in land value changes. This year there is only one notable difference the change in land values in the Southeast was not as large as in other areas of the state (Table 1). The highest valued land continues to be in the Central region followed by the West Central, North, Northeast, Southwest, and Southeast. 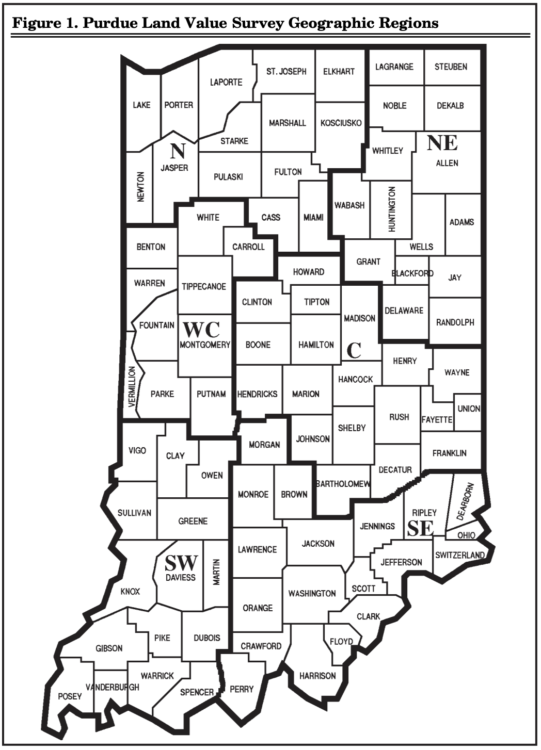 Cash rents are the highest in the Central and West Central regions. Across all three land qualities, cash rents in these two regions were very similar. When looking at the cash rent per bushel for the West Central and Central regions, these values ranged from $0.97 to $1.03 per bushel. These per bushel rents are the highest in the state. The next highest per-bushel rent was in the North and Southwest, ranging from $0.88 to $0.91. Per bushel rents in the Northeast ranged from $0.84 to $0.86. The lowest per bushel cash rents were $0.74 to $0.77, reported for the Southeast. 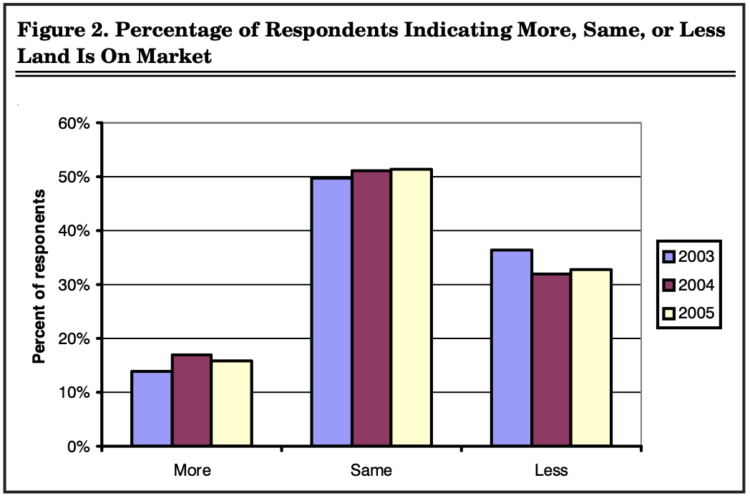 Figure 2. Percentage of Respondents Indicating More, Same, or Less Land Is On Market 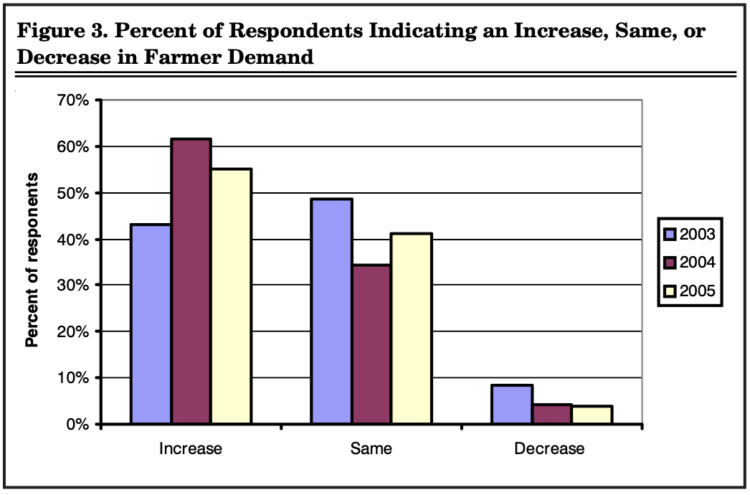 Figure 3. Percent of Respondents Indicating an Increase, Same, or Decrease in Farmer Demand 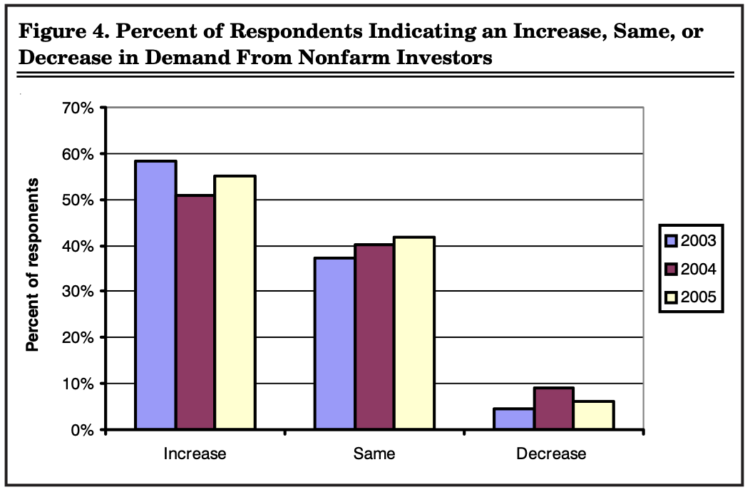 Figure 4. Percent of Respondents Indicating an Increase, Same, or Decrease in Demand From Nonfarm Investors

Making a farmland purchase is a long term commitment. As a result, expectations regarding crop prices over the next few years can have a strong influ- ence on farmland values. In order to gain insight into price expectations, respondents were asked to estimate the annual average on-farm price of corn and soybeans for the period 2005 to 2009. 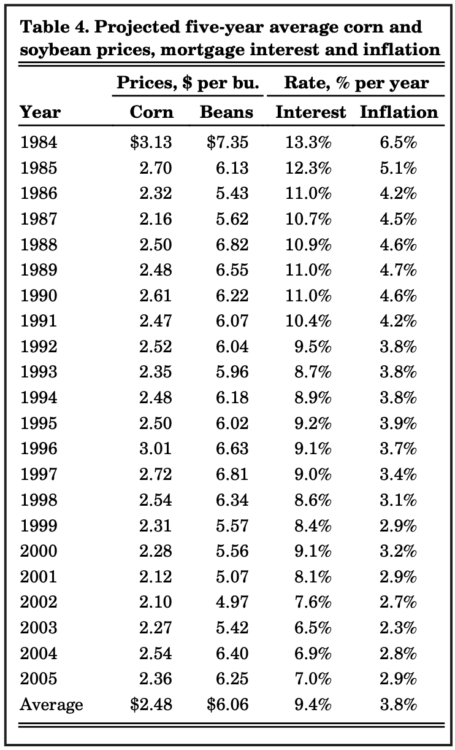 Changes in long-term interest rates have been a topic of discussion for a number of years. Interest rate watchers have been predicting that long-term interest rates are going to increase. At the beginning of the year, there was some upward movement but since then they have fallen back. Last year the average expected five-year interest rate increased by 0.4%. This year this rate changed only 0.1% to 7.0%, a rate well below the series average of 9.4%. Survey respon- dents are also expecting the inflation rate over the next five years to be moderate at 2.9%.

Another important expecta- tion that influences current farmland price is the expected future change in farmland values. Table 1 indicates that for the six-month period from June to December 2005, survey respondents expect values to continue to increase. On a state wide basis this increase is expected to range from 1.4% to 1.6%, a fairly modest increase given this past year.

Occasionally we include extra questions in our survey to obtain information about a particular topic. This year, we asked about pasture rent and the value and cash rent of irrigated farmland.

To obtain a more comprehensive assessment of the relative strength that various influences exert on farmland values, survey respondents were asked to assess the influence of 11 different items on farmland values. These items included:

9. Current inventory of land for sale,

10. Current cash liquidity of buyers, and

In order to provide a perspec- tive on the changes in these influences, both 2004 and 2005 data are presented in Figure 5. The labels on the horizontal axis of the chart indicate the influ- ence in the above list. 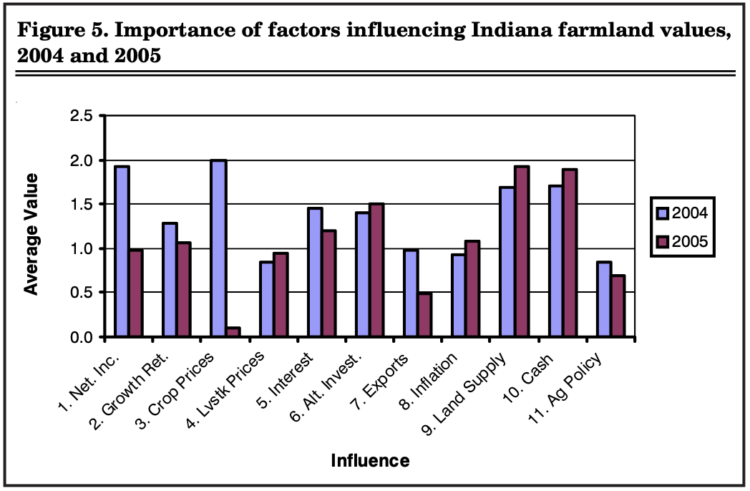 In 2005, all factors were positive. This is the second year that all factors have been posi- tive influences. The factors given the most positive influence were the current inventory of land for sale (9) and the current cash liquidity of buyers (10). These were both important influences in 2004. The availability of farmland for sale was discussed previously. The liquidity of buyers continues
to be enhanced through the use of the Internal Revenue Code Section 1031-  tax-free exchanges. Section 1031 in the federal tax law provides a process by which sellers (or traders) of real estate can reinvest the revenue from current holdings from real estate back into a “like-kind” real estate investment without paying capital gains tax. The tax deferment provided by Section 1031 is often advantageous to individuals selling farmland for development. Because there is a time limit allowed for reinvestment under Section 1031, this limit may place upward pressure on prices of land available for sale.

Over the past year, Indiana farmland values have moved strongly higher. The limited supply of land for sale combined with strong demand for farm expansion, country residences and nonfarm development, and continued interest from nonfarm investors in farmland purchases provide strength to Indiana􏰄s farmland market. In the past two years, Indiana farmland values have surged upward by 17.2% to 21.4%. After such an increase, a moder- ating or cooling off period might be expected.

At the current time, there is a positive tone to the farmland market but not as positive as last year. This makes it more important to carefully watch for factors that could derail the upward trend in farmland prices. At this time, mid-July, hot dry weather is driving speculation about crop yields.

There is a growing nervousness about how this year might turn out for Indiana farmers. During the past couple years, per acre crop production costs have increased sharply. Reduced yields will lead to much higher per bushel costs. While a smaller than expected corn and soybean crop will result in higher than expected prices, continued dry weather could mean substan- tially lower income for some Indiana farmers. While farm income was expected to decline from its record level of last year, a sharply lower income is likely to have a dampening influence on the farmland market.

The Purdue Land Value and Cash Rent Survey is conducted each June. The survey was made possible through the cooperation of numerous professionals that are knowledgeable of Indiana􏰄s farmland market. These professionals include farm managers, appraisers, land brokers, bankers, Purdue Extension educators, farmers, and persons representing the Farm Credit System, the Farm Service Agency (FSA) county offices, and insurance compa- nies. Their daily work requires that they stay well informed about land values and cash rents in Indiana.

The data reported here provide general guidelines regarding farmland values and cash rent. To obtain a more precise value for an individual tract, contact a professional rural appraiser or other professionals in your area that have a good understanding of the local situation.

We express appreciation to Carolyn Hunst of the Department of Agricultural Economics for her help in conducting the survey.