What a difference a year can make. Last year at this time, there were questions about whether or not farmland values were nearing a top. There are no such discussions this year. This year the question is “How high might farmland values and cash rent go?”

Higher corn and soybean prices brought about by the increased demand for these crops are being translated into higher farmland values and cash rents. The June 2007 Purdue Land Value Survey found that farmland values in all areas of the state took a sharp turn upward. On a state-wide basis, the average value of bare Indiana cropland ranged from $2,991 per acre for poor quality land to $4,407 per acre for top quality land (Table 1). Average quality Indiana cropland had an estimated average value of $3,688 per acre. For the 12-month period ending in June 2007, this was an increase of 19.2%, 16.6%, and 16.9%, respectively for poor, average, and top quality land. One needs to go back to 1977 to find a larger annual increase in Indiana farmland values. 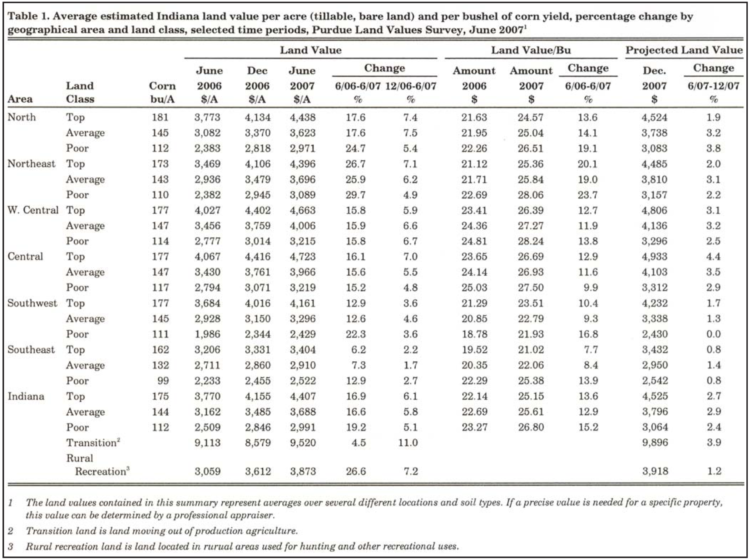 Land quality was measured in the survey by asking survey respondents * The median is the middle observation in data that have been arranged in ascending or descending numerical order to provide an estimate of long-term corn yields. The average reported yield was 112, 144, and 175 bushels per acre, respectively for poor, average, and top quality land. State-wide, the value per bushel for different land qualities was very similar, ranging from $25.15 to $26.80 per bushel. On a per bushel basis, the most expensive land is the poor quality land with a value of $26.80 per bushel. Top quality land was the least expensive at $25.15 per bushel.

Survey responses were organized into six geographic regions of Indiana (Figure 1). As in the past years, there are geographic differences in land value changes. This year Northeast Indiana reported the strongest percentage increases in land value. Bare farmland in these areas was estimated to have increased by 25.9% to 29.7% (Table 1). The increase in value in the North, West Central, Central, and Southwest were also strong. For most of the productivity levels, the rate of increase ranged from 12.6% to 17.6%. The exceptions to this were the changes in the value of poor quality land in the North and Southwest with changes of 24.7% and 22.3%, respectively. The increase in farmland values in the Southeast was more modest, ranging from 6.2% to 12.9%. 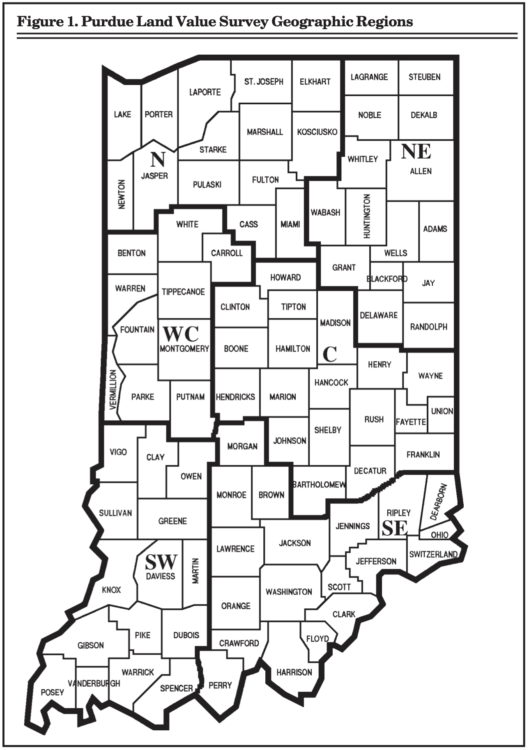 All areas of the state reported an increase in cash rent for all land qualities (Table 2). The strongest percentage increases were in the North and Northeast, ranging in value from 12.3% to 14.9%. This was followed by Central and West Central Indiana with changes of 7.6% to 10.9%. The changes in the Southwest and Southeast ranged from 3.2% to 8.7%. 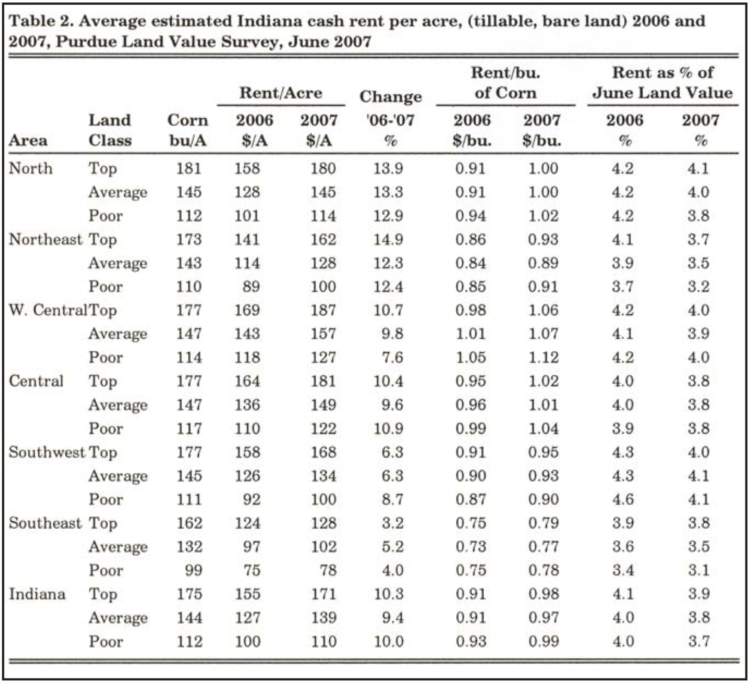 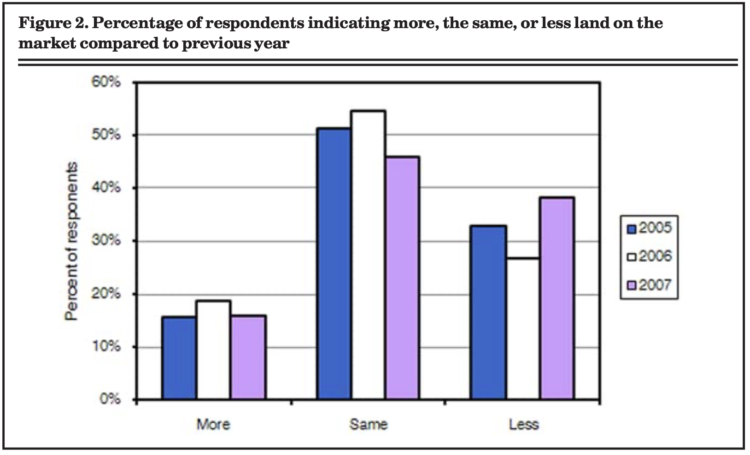 Figure 2. Percentage of respondents indicating more, the same, or less land on the market compared to previous year 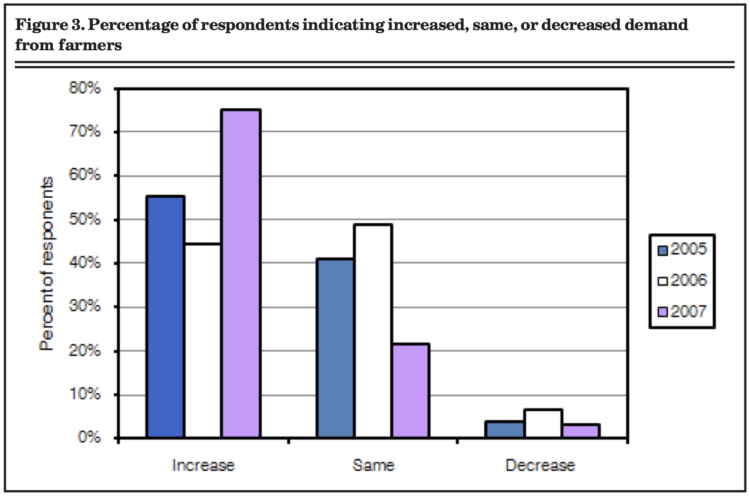 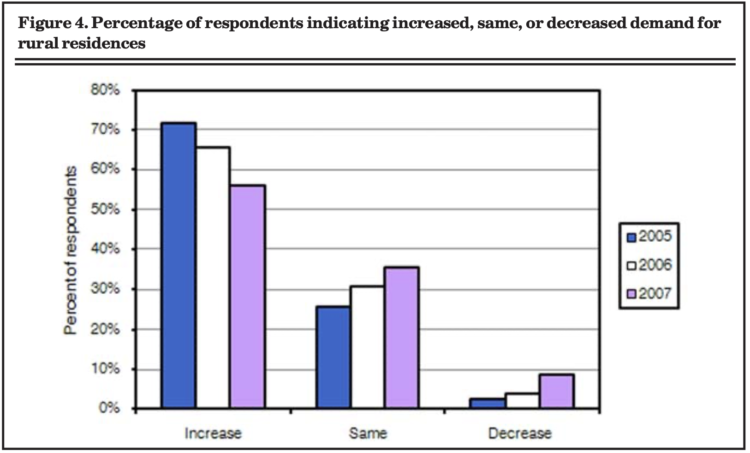 Nonfarm investors are another group that contributes to the demand for farmland. Respondents were asked to indicate if they perceived an increase, the same, or a decrease in demand from individual investors as well as organized investment efforts such as pension funds. Over the past few years, stock market returns have been improving. In addition, higher interest rates have provided increased competition for investor’s dollars. These changes may be reducing the demand for farmland from these sources. How- ever, in the 2007 survey, 48% of the respondents indicated an increase in demand from individual investors (Figure 5). A similar pattern occurred in demand for farmland from pension funds. In 2007, 27.5 % of the respondents indicated an increased demand from pension funds. This was an increase from 16.6% of the respondents in 2006. 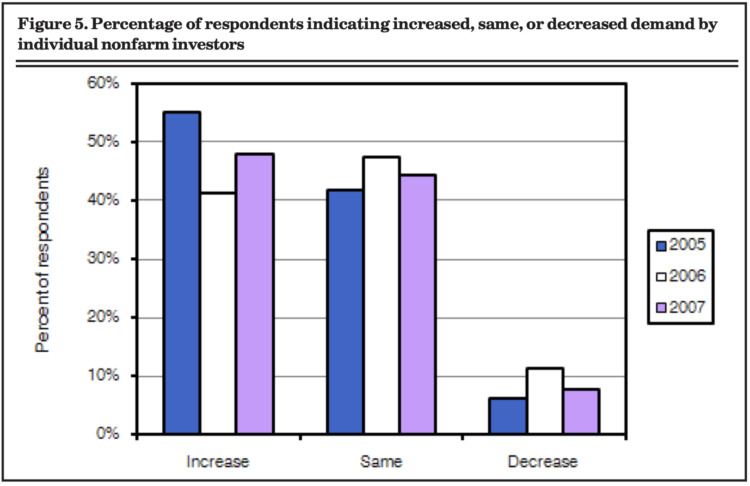 Making a farmland purchase is a long term commitment. As a result, expectations regarding crop prices over the next few years can have a strong influence on farmland values. Given the developments with ethanol and other biofuels, it is likely that these expectations have sharply changed. In order to gain insight into crop price expectations, respondents were asked to estimate the annual average on-farm price of corn and soybeans for the period 2007 to 2011. As expected, this year saw a large increase in the five-year average price of corn and soybeans. On average, survey participants expect corn prices to be $3.43 per bushel and soybean prices to be $7.31 per bushel, estimates that are well above the 15-year average (Table 4). 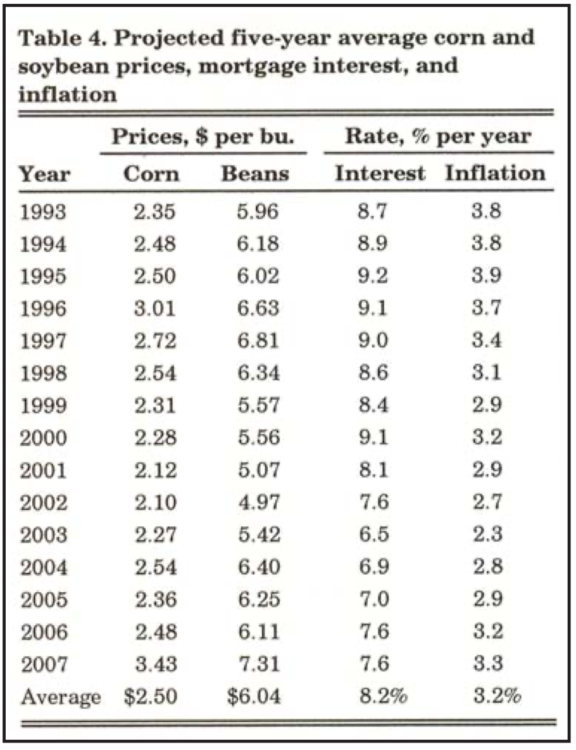 There was very little change in inflation expectations. On average, survey respondents estimate annual inflation over the next five years will be 3.3%, just 0.1% above the average estimate in 2006. 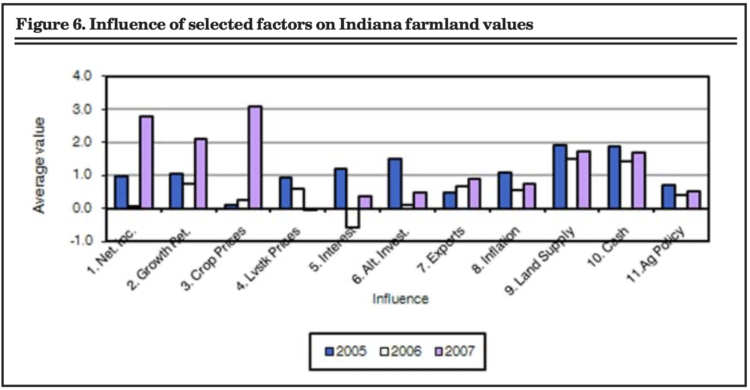 The current inventory of land for sale and the cash liquidity of buyers are also viewed as important contributors to the strength of the farmland market by the 2007 respondents. The average value of these two influences has been fairly consistent during this three year period. In 2005 and 2006, these two items were the highest weighted influences. If the income and crop price picture had not changed in such a dramatic fashion since the last survey, these two items would again have the largest average weight. As in the past, the liquidity of buyers continues to be enhanced through the use of 1031 or tax free exchanges. Section 1031 of the IRS regulations provides a process by which sellers of real estate can reinvest the revenue back into real estate without paying capital gains tax. This is often advantageous to individuals selling farmland for development.

The sudden increase in crop prices has created increased uncertainty. As an industry, markets are working through how the new margin from crop production will be shared among market participants. Expectations about corn and soybean prices, interest rates, and the rate inflation expressed by survey participants indicate that there may be future increases in farmland values. This is also indicated by survey respondents when asked to project land values for December 2007 and in five years.

On a state-wide basis, Table 1 indicates that for the six-month period from June to December 2007, survey respondents expect farmland values to increase 2.4% to 2.9%. Generally survey respondents in the North, Northeast, West Central, and Central regions expect increases larger than the state-wide average. The strongest increase is expected in the Central region with increases ranging from 2.9% to 4.4%. The increases in the Southwest and Southeast regions are expected to be less than the state average, ranging from zero to 1.7%. If these expectations are used to project an annual increase in land values, they indicate a slowing in the rate of increase. This is expected given the large increase this year.

Occasionally we included extra questions in our survey to obtain information about a particular topic. This year, we asked about pasture rent, the value and cash rent of irrigated farmland, and the rental of on-farm grain storage.

The Purdue Farmland Value and Cash Rent Survey indicates that over the past year Indiana farmland values and cash rents have made a significant jump upward. There is a limited supply of land for sale or rent. There is a strong demand from farmers, investors, and people desiring to live in the country. The liquidity of buyers appears strong. Favorable commodity prices, interest rates, and inflation rates are anticipated by survey respondents. In addition, most of the respondents expect land values to increase over the next five years.

These items indicate that farm- land values are likely to continue to move higher. Will these factors result in another sharp increase in farmland values next year? What events could dim the bright outlook for continued strong increases in farmland values?

It is difficult to know which events might occur. However, before undertaking a farmland purchase, preparing a list of what could go right and what could go wrong and developing subjective probabilities of their likelihood is an important part of sound business management.

* The median is the middle observation in data that have been arranged in ascending or descending numerical order.

** Income capitalization is a common method used to estimate the value

The Purdue Land Value and Cash Rent Survey is conducted each June. The survey was made possible through the cooperation of numerous professionals that are knowledgeable of Indiana’s farmland market. These professionals include farm managers, appraisers, land brokers, agricultural loan officers, Purdue Extension educators, farmers, and persons representing the Farm Credit System, the Farm Service Agency (FSA) county offices, and insurance companies. Their daily work requires that they stay well informed about land values and cash rents in Indiana.

We express appreciation to Marsha Slopsema of the Department of Agricultural Economics for her help in conducting the survey.