Is the public willing to pay to curb microplastic pollution?

Microplastics are plastic particles less than 5mm in size in any one dimension (Arthur, Baker and Bamford, 2009), and can be found in most waterbodies. Microplastics bind with compounds containing toxins in the water, providing these toxins with a route into the human body (World Economic Forum, 2018). Many microplastic particles are around (or smaller than) the size of plankton, the primary source of food for many marine lifeforms. Therefore, toxins are accumulated through the marine life food pyramid and are eventually consumed by humans.

People eating seafood are ingesting up to 11,000 pieces of microplastic particles every year (World Economic Forum, 2018). Given such circumstances, will individuals be motivated to curb this potential threat? On a side note, it is important to identify which type of individuals have higher willingness to lessen microplastic pollution than others, from a policy perspective.

The other parts of the survey elicited 1) the attitudes/behaviors towards the environment; 2) WTP for items with other alternative ecolabels, such as organic; 3) the taxes that need to be levied on potentially harmful items, such as climate change inducing items; 4) the health consciousness of each individual; 5) how knowledgeable each respondent is about microplastics, especially about microplastic clothing fibers; and 6) their attitudes/behaviors towards plastics and microplastics.

Tables 1 and 2 below show various information elicited in the survey. Samples falling into each category for the categorical variables are reported in Table 1.

Table 2 presents the mean and the median of continuous variables used in this analysis. WTP has a mean of 0.86, which means on average, the individuals sampled were willing to pay $0.86 annual tax to reduce microplastic pollution by 1%. However, the distribution of the WTP variable is skewed, with 24% of the respondents having 0 WTP and 5% of the respondents having an outlier value of 10. Therefore, the median WTP of $0.40 annual tax is a more accurate statistic for the WTP values.

The Q16Score is the summation of responses to a set of questions about pollution control. The aggregate scores for respondents range from 4 to 20 with higher scores indicating a more pro-plastic-control attitude. EnvstateScore is generated like the Q16score, but focuses on attitudes about general environmental protection, ranging from 7 to 35. Clothplastic2Score is an index we create from questions about clothing choices or behaviors that may increase microplastic pollution. These questions measure awareness of microplastic pollution with higher scores indicating higher awareness. Health2Score was calculated in the same way using 4 questions about individual health consciousness and behaviors[4]. The last four variables are the first and second principal components which we use as indices of the willingness to pay for items with other alternative labels, such as Non-GMO and organic, and the taxes each respondent thinks need to be levied on potentially harmful items to the environment or individuals, such as climate change inducing items.[5]

The WTP variable had a significant number of individuals with zero marginal WTP, in which 140 out of 580 individuals had 0 WTP. To account for this high number of zero responses, a Tobit regression model was used to analyze the causal effect of the factors on WTP, with the lower bound set at 0. The model results are shown on Table 3 below.

We found that exposing respondents to differing information regarding the severity of the microplastic problem had a significant effect. Respondents being informed that the microplastic pollution levels were low and average expressed about 24.5 cents lower WTP than those in the high pollution information group. These results are reasonable because higher pollution will urge people to pay more to control it.

In terms of demographics, those who identified as Hispanic and Asian, those who chose ‘other’ as their marriage status, and those who resided in the South or Midwest regions at the time of the survey had higher WTP than those who did not fall into these categories. Due to the study being framed in a water pollution setting, it was expected that the Asian racial category will have higher WTP than other groups due to this group having the highest seafood consumption (Terry et al., 2018). The difference in WTPs between marriage status groups might be partially explained by the fact that those who lead alternative lifestyles tend to be politically liberal, who typically care more about environment protection than more conservative individuals, who are more likely to be in traditional marriages (Funk and Kennedy, 2020; Schnabel, 2018). 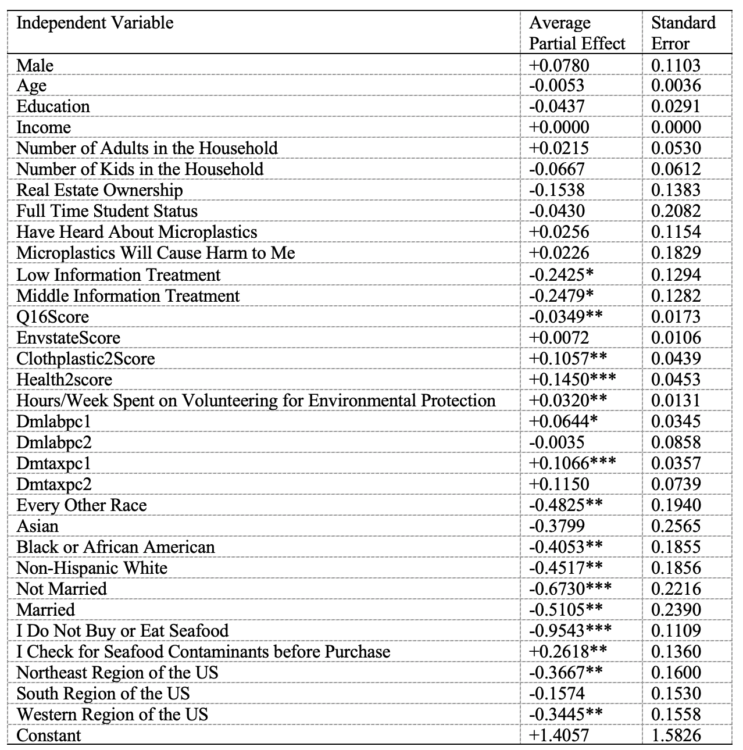 It was also found that those who spend their time outside of work on environmental protection volunteer work, are more health conscious, or have less microplastic increasing clothing habits have higher WTP for microplastic reduction than those who do not. In addition, while both Dmlabpc1 and Dmtaxpc1 are statistically significant, the taxes principal component (PC) has twice the effects on WTP as the labels PC and is more significant. This is not surprising, since the study is about a new tax to decrease microplastic pollution[6].

[1] The survey sample was a targeted quota sample, with gender, age, region, ethnicity, education level, and income level accounted for and set to resemble the percentages found for the U.S. population in the last census. The survey was conducted from July 2020 to August 2020, with the sample size being 580. More details available upon request, from the authors.

[2] The information treatment given to respondents: The average U.S. resident encounters about 705 microplastic clothing fiber particles per day, from using water for everyday activities such as cooking and drinking. This figure is based on an increasing rate of pollution of 72,000,000 microplastic particles per day. The wording is the same in all three categories, with the underlined numbers changing, as listed in Table 1.

[3] The WTP was elicited using a hierarchical design. More details about the design available from the authors, upon request.

[4] More details on the distribution of the response and about these indices are available from the authors, upon request.

[5] Principal components are perpendicular axes of the space spanned by the variables of interest, where the axes explain the variance of the variables of interest, in a decreasing order of magnitude. Principal components analysis is used to reduce the dimensionality of datasets, due to limited sample size and to avoid overloading the model. (James et. al., 2013)

[6] Specific details and numbers available upon request, from the authors.