Accidental spills of farm chemicals can occur during mixing or transporting or from storage tank leaks. In response to concerns about possible damage to Indiana’s water quality, the legislature asked the State Chemist’s Office to propose a set of rules for fertilizer storage. (Rules already exist for pesticides.) The rules were published in the Indiana Register in September 1990. Effective in 1991, these rules call for a large basin or dike to be constructed around fertilizer storage tanks, as well as a pad for loading and mixing. While the potential for groundwater contamination is real, the costs of such containment are also significant. This article describes the fertilizer spills which occurred in Indiana since 1985 that helped motivate these new rules.

Indiana’s Department of Environmental Management (DEM), which monitors spills, has collected data on agricul­tural chemical spills since 1985. (See Table 1.) The data include the year, month, party responsible, where the spill occurred, the material spilled, the volume spilled, and whether or not the spill was contained. This information is available to the public at the office of the DEM. 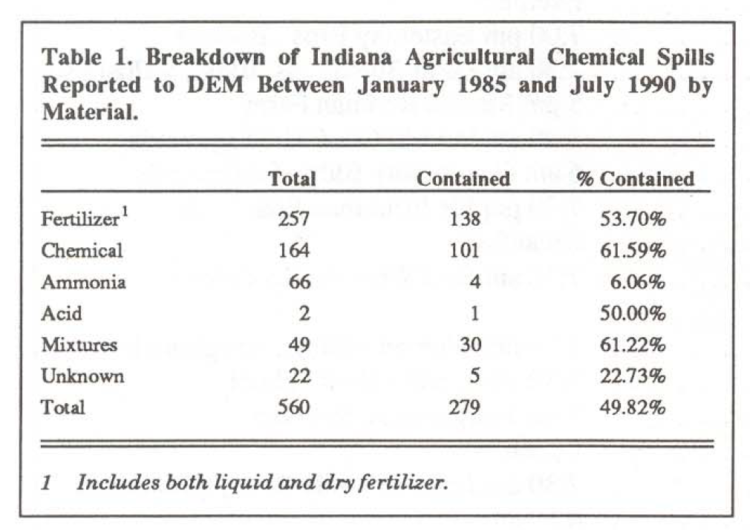 Table 1. Breakdown of Indiana Agricultural Chemical Spills Reported to DEM Between January 1985 and July 1990 by Material.

Of the 560 spills reported to DEM in this four- and one-half-year period, approximately half were contained. Contained spills most likely occurred at a storage site, rather than in transport, and are therefore most likely to be affected by the new rules. We will therefore focus on contained spills. We will also focus on liquid spills, since liquids are more likely to rapidly reach and contaminate water than are dry materials.

The Association of American Plant Food Control Officials (AAPFCO) lists 645 fertilizer manufacturers, blenders, and retail outlets in Indiana. Thirty-eight percent of these plants provided AAPFCO with information on the materials they handled. Assuming these plants are representative of all the plants in Indiana, 95% handle liquid fertilizer. Nitrogen solutions accounted for 52% of total liquid fer­tilizer storage, phosphorous solutions for 21 %, anhydrous ammonia for 8%, and finished product and phosphoric acid for the rest.

In the early years, not all spills were reported to the Department of Environmental Management. An increasing percentage of total spills has been reported over time. There were 130 contained liquid fertilizer spills in Indiana reported to the DEM between January 1985 and July 1990. The volume of six of these spills is unknown. The total known spill volume was 305,788 gallons. The average volume per spill was 2,466 gallons, but reported spills varied from one gallon to 30,000 gallons. Figure 1 shows a distribution of reported contained liquid fertilizer spills by size. 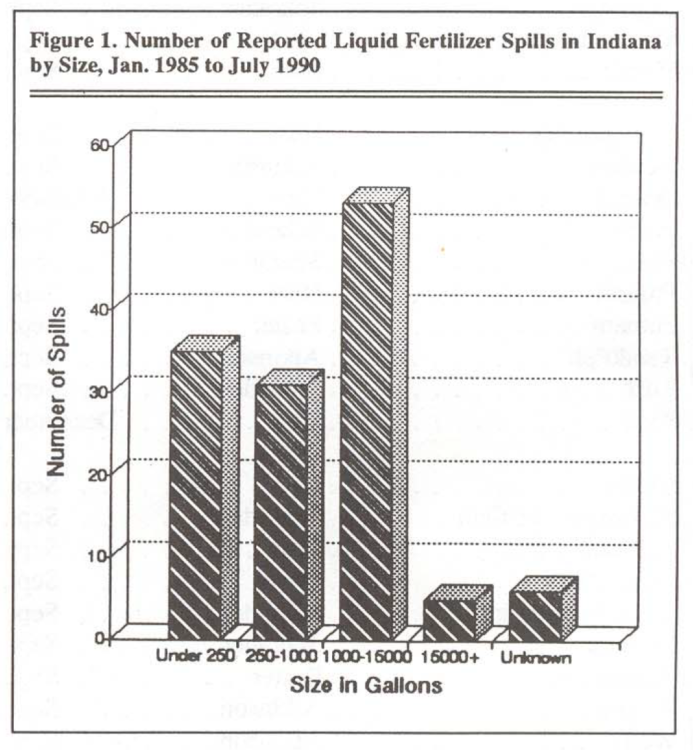 Figure 2 shows the number and average contained liquid fertilizer spill size by county. As one would expect, the spills were not evenly distributed over Indiana, but were con­centrated in counties with larger farming sectors. Spills were also more likely to occur in the spring planting season from April to June. 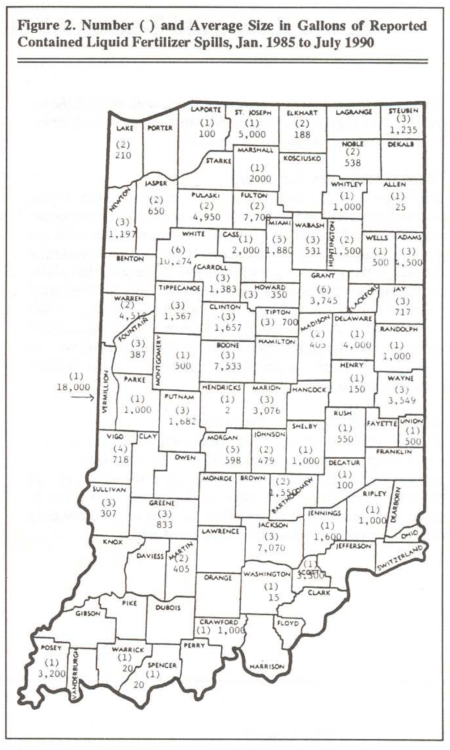 How Costly Are Spills?

Spills are expensive for the farmer or dealer to clean up. Preliminary estimates of clean-up costs for liquid fertilizer spills run up to $5,200 for a spill of less than 250 gallons. There is one reported case of a 40,000-gallon spill that had, so far, cost $100,000 in clean-up costs.

Very preliminary estimates of costs and benefits from the new containment rules (Krueger, 1991) indicated that savings to dealers from expected reductions in direct clean­up costs would not quite equal the cost to them of the new containment system. However, these direct clean-up costs did not include the cost of an emergency response team if that were necessary, the payment for fish killed, or the cost from subsequent legal action. An emergency response team can cost $1,000 plus $750-$1,000 per hour for a team of three to four persons. Fish kill is frequently associated with fertilizer spills, and this cost can be significant. We do not have data on the cost of subsequent legal action.

There are costs to society as well as to farmers and dealers. Other research at Purdue (Lovejoy, et al., 1989) illustrated that very small changes in water quality parameters can have major costs. A change in water quality of 1-15% resulted in an estimated decrease in benefits of Indiana recreational fishing by $2-$20 million dollars per year. While estimating the recreational fishing benefits of averting a specific spill is quite difficult, the aggregate value could run into millions of dollars. Adding other benefits like aesthetics, boating, swimming, and so on, would push the benefits of avoiding such a spill even higher. Any effect on human health would push the cost to society higher yet.

However, to put the spill volume numbers in perspective, it is useful to remember that there were 5,379,000 tons of liquid fertilizer used in Indiana between 1985 and 1989 (Tennessee Valley Authority Economics and Marketing Staff). Assuming 10.5 lbs. per gallon, and 2,000 lbs. per ton, the contained liquid fertilizer spilled between 1985 and 1989 (276,182 gallons) represented less than 3/100 of 1 % of the total liquid fertilizer used in that period in Indiana.
While the cost of containment systems is significant, the new rules for fertilizer storage should help reduce the costs of clean-up after spillage and the potential for contamination of Indiana water.