Increased competition among communities to attract new manufacturing plants in the 1990s lead to the question of whether or not recruitment pro-grams worked to attract firms. A survey article by Smith and Fox concluded that recruitment programs that reduced corporation taxes had little effect on a firm’s location decision. Market access, labor force characteristics, and a concentration of businesses activity were far more important influences on firm’s location choices (Smith and Fox).

Communities can influence some of these factors, such as fire protection, educational facilities, utility services, lot size, etc. However, other factors, such as access to major transportation networks and avail-ability of skilled workers can not be easily influenced. When attempting to determine the strengths and weaknesses of individual communities, leaders must be realistic in assessing their community’s potential to attract new firms. If a community does not possess factors influencing location, footloose firms may be difficult to attract.

Growth Trends in the United States The continued growth of the global economy has spurred a world wide industrial explosion. While a large percentage of this growth has been outside the United States’ borders, such as in Brazil, China, India, Russia, and Saudi Arabia, the US has been a growth leader. In 1996 alone, large manufacturing projects have grown in the US by 5,576 new plant construction announcements. (Pennington).

Total announcements, which are public statements by firms of new facility construction or existing facility expansion, for industry in the U.S., from 1992-1996, was 27,770 establishments (Conway Data*). Four of the nine U.S. regions accounted for 77% of this growth. These regions were: the East North Central, South Atlantic, East South Atlantic, and West South Atlantic Regions (Conway Data). Fifty per-cent of the nation’s population lives within these four regions.

The East North Central, which includes Indiana, and South Atlantic Regions, grew by 14,657 firms (Table 1) accounting for 52% of new firm announcements. Announced firm locations tend to be in population centers with the infrastructure, labor, and other assets firms need to support growth and expansion. The Mountain and Pacific regions and Northeastern region experienced the least amount of growth since 1992, accounting for 23% of total U.S. announcements. These regions rep-resent 50% of the U.S. population. States in these regions generally do not have the population base, infra-structure, workforce, or manufacturing base found in the Midwest and southwest areas of the United States.

With a concentration of manufacturing growth in twenty-two states, slower growing states should examine their recruitment potential and consider shifting attention to strategies that support indigenous business growth. The key to successful growth is providing a location that allows firms to effectively compete in the marketplace.

The East North Central Region attracts and retains manufacturing. The region has lead the nation in new firm announcements three of the last five years. This growth is attributed to the return of manufacturing firms that moved south for low wages and more friendly tax cli-mates (Rondy). They are returning in search of skilled labor and product markets. 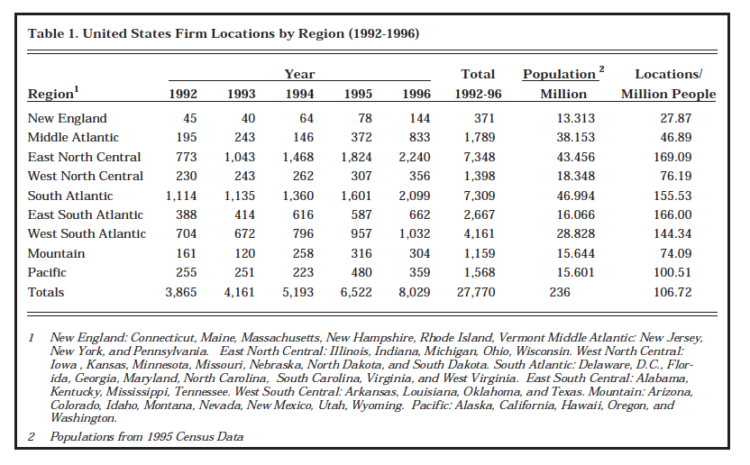 The East North Central Region experienced more growth than any other region, with a growth of 7,348 corporate facility announcements. Infra-structure, skilled labor, educational centers, and communication services position the East North Central Region for continued growth. The region has potential to meet the demand for technological services, has an educated labor force, and pro-vides access to product markets.

All East North Central States (Illinois, Indiana, Michigan, Ohio, and Wisconsin) experienced growth from 1992-1996. Ohio led with announcements for 3,639 new or expanded manufacturing facilities (Table 2). Illinois and Ohio, with 53 percent of the region’s total population, accounted for 69 percent of the new firms in the region, per capita, from 1992-1996.

The East North Central Region has transportation networks, manufacturing, and financing. Major rail services in the cities of Chicago and Detroit, along with the networks throughout Illinois, Indiana, Michigan, and Ohio allow the region to supply materials and products all over the United States. Furthermore, the region’s highway system is considered to be one of the best in the country because of the tremendous amount of interstate highways connecting the region to Canada and the rest of the US. (Rondy).

Comparing the establishment announcements considering the population provides insight into each state’s relative performance. Table 2 measures growth as a number per million population. Ohio still leads the region on a per capita basis. However, Wisconsin and Indiana become the second and third leading states when considering locations per million people. Illinois and Michigan had around 100 announcements per million, a slower pace than the two least populated states.

Indiana competes for new investment well with other states in the region. Indiana’s growth is attributed to the state government and local governments policies to attract and retain firms (tax abatements and workforce training assistance), geographic location, business cost, and labor availability.

Indiana had announcements for 180 manufacturing plants, 11 headquarters, 13 offices, 4 research and development plants, and 32 distribution warehouses from1992-1996, creating an estimated 20,344 new jobs. With the steel industry rejuvenated in the Northwest corner of the state and the auto industry moving into the central and southern half of the state, Indiana has made steps to increase employment.

Indiana’s continued attractive-ness is seen by the location of I/N Tek steel plant in New Carlisle and the Toyota Plant in Princeton.

Via the interstate highway system, transports leaving Indiana can reach 60% of the US population in one day (Site Selection, Feb. 1994, pg. 64). Indiana also has high concentrations of rail routes creating many opportunities for product mobility that are not offered in most states (Site Selection, Feb. 1994, pg. 64). Indiana’s ports on Lake Michigan and the Ohio River provide Indi-ana the Atlantic Ocean and the Gulf of Mexico- via the Great Lakes and the Inland Waterway System.

Indiana had both new facility and expansion announcements from 1992-1995. The distribution of these announcements is shown in figures 1 and 2 (Figure 2 on page 12). New firm locations are concentrated in Allen (Fort Wayne) and Marion (Indianapolis) counties. Other counties exhibiting growth include Vigo (Evansville), Lake (East Chicago), St. Joseph (South Bend- Mishawaka), and Delaware (Muncie) counties. Firm expansions are concentrated in the same areas, Allen, Marion, and St. Joseph counties (Conway Data Inc.). Figure 2 shows the growth of expanding firms is more widespread than that of new firm announcements. Figures 1 and 2 show growth occurred in and around metropolitan areas and along major interstate highways. 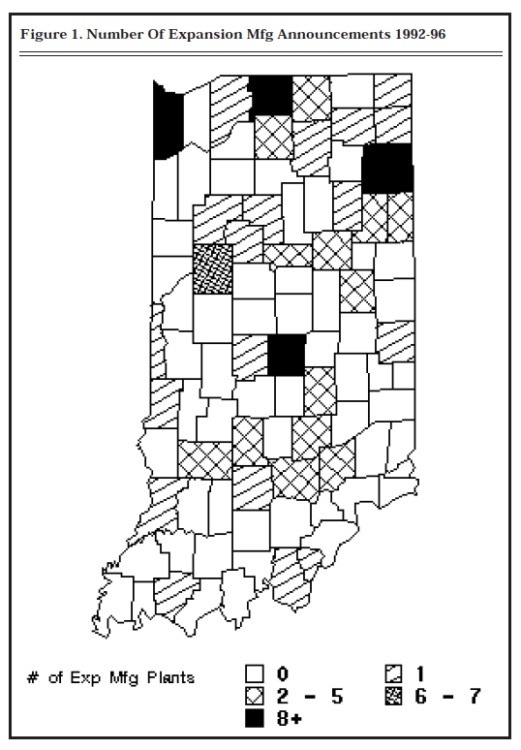 Regional and national growth trends suggest Indiana will to continue to experience growth. Growth in new plant investment will be concentrated around Indiana’s metropolitan areas and along the interstate highway system. Expansion of existing industry, while concentrated in the manufacturing base around metropolitan areas, will be statewide. This should provide rural areas opportunity to maintain and expand their manufacturing base.

* The data were attained from the Conway Data and the “Site Selection Handbook,” and represents announcements of firm locations, new or expanded. The firms that were reported are a sample of the growth that actually took place. Announcement data represent firms that meet one of the following criteria a minimum investment of $405 million, creation of 100 jobs, and a minimum of 500,000 square feet of floor space created. This criteria was relaxed for certain cases to provide a more balanced geographical representation, thus enabling smaller projects to be reported, these were generally expansion projects in rural communities.