The assessed value of farm land is going to go up over the next few years. But not as much as it would have, because of new legislation that passed the Indiana General Assembly in March. Farm land assessments are likely to rise “only” 30%, instead of 45%, from 2010 to 2013.

Farm land assessments start with a base rate, which is a dollar amount per acre. It’s recalculated every year by the state’s Department of Local Government Finance (DLGF). The base rate is multiplied by a productivity factor, which measures the productivity of each acre for growing corn. Assessments for some acreage are reduced by an influence factor, to account for factors that reduce value, like frequent flooding. The result is the taxable assessed value for each farm acre.

The base rate formula divides a measure of net farm income by an interest rate to get a capitalized value, which is what a prudent investor would pay to receive that net income, if he or she wanted
a rate of return equal to that interest rate. Capitalized values for six years are used to calculate the base rate, in order to smooth out fluctuations.

Every year new more recent values for income and interest rates are added to the six years, and an earlier year is dropped. Table 1 shows the data for recent years. Net Incomes are measured by cash rent and a calculation using prices, yields and costs. The capitalization rate is the average of farm real estate and operating loan interest rates. Market value in use is the result of dividing the two net income figures by the capitalization rate. And the capitalized value is the average of these two.

Table 1. Data Used to Calculate Base Rate of a Farm Land Acre 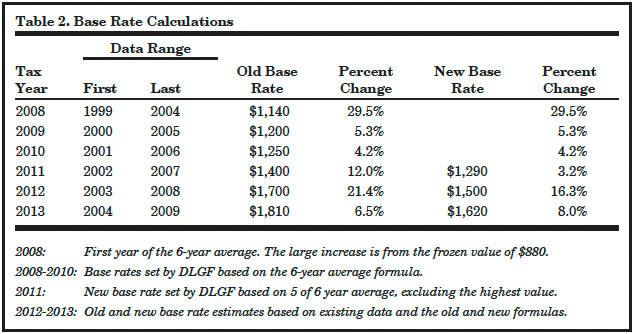 At the same time, the Federal Reserve responded to the recession by reducing interest rates. Farm loan rates fell with most other rates. The higher net incomes, and the lower interest rates, produced very high capitalized values for 2007, 2008 and 2009. The 2008 value was particularly high at $2,729 per acre.

Capitalized values enter the base rate formula with a four year lag. The base rate for 2011 taxes will be based on data from 2002 through 2007. That will be the first time the high commodity prices will influence the taxable value of farm land. The very high 2008 capitalized value enters the mix for taxes in 2012.

The General Assembly responded with Senate Bill 396, which proposed a change in the base rate formula. The original version of the bill dropped the highest and lowest capitalized values and averaged the remaining four, so it was called the “Olympic average.” It would not have changed the base rate for 2011, since the high and low values to be dropped were equally distant from the average of $1,400. But it would have reduced the 2012 value to $1,590, and the 2013 value to $1,750. The bill passed the Senate unanimously.

Perhaps because the bill had so much support, it became a vehicle for jobs legislation in the House. It was amended eight times. What had been a bill with two sections was now a bill with 53. It passed the House unanimously.

The two versions of the bill went to a House-Senate conference committee, where all of the jobs sections were stripped from the bill. What was left, however, was a bit different. Now the new base rate formula eliminated just the highest capitalized value, and averaged the remaining five. The Senate held the bill until negotiations on unemployment insurance taxes reached a compromise. It passed on the last day of the session, and the Governor signed it on March 25 (as Public Law 112). It amends Indiana Code 6-1.1-4-4.5.

With just the highest of six capitalized values dropped, the new formula reduces the future base rates by more than the Olympic average formula. The DLGF has already recalculated the base
rate for 2011 taxes. The 2007 capitalized value is dropped, and the remaining five years average to $1,290. That’s a 3% increase over 2010, instead of a 12% increase (see Table 2).

The base rate formula change will affect other taxpayers. As farm land assessments rise, total assessed value increases, especially in rural communities where farm land is a big part of the tax base. With higher total assessed value, tax rates can be lower and still raise the revenues that local governments need. That means lower tax bills for nonfarm taxpayers. Under the new formula total assessed value won’t increase as much, so rural non-farm taxes won’t fall as much. The shift of the property tax burden to farm land will be smaller.

Is the new base rate formula a tax cut for farm land owners? Farm land taxes will go up substantially with the rising base rate. But not as substantially as they would have. This is a frequent problem encountered in policy analysis. Do we compare the policy change to what exists now, or to what would have existed without the policy change? Since what exists now was going to change in any case, the effect of the policy is measured better by the latter comparison. But taxpayers might see this as a smaller tax increase, not a tax cut.