The results of the 2007 Census of Agriculture show the new trends in agriculture (more farms, more smaller farms, more Internet use, more women operators, … ). The 2008 survey of commercial producers by Purdue University’s Center for Food and Agricultural Business complements the US census. It provides information on current demographics and farm characteristics, looks at general attitudes of producers and their use of communications media, and focuses on large farms.

The 2008 Commercial Producer Project was undertaken with the goal of providing insight into this rapidly evolving group of commercial producers ‑ a group that accounts for the majority of agricultural inputs purchased. The Purdue University Center for Food and Agricultural Business (CAB) surveyed 2,574 producers in the following enterprises: corn/soybean, wheat/barley/canola, cotton, swine, dairy, beef, in early 2008. This survey is a follow‑up to similar studies completed in 1993, 1998, and 2003.

The producers‑respondents were located across the U.S., with the sample selected from those key states accounting for 75% of total U.S. pro‑ duction for each of the seven enterprises represented. The focus of this study is the “commercial” farmer (see Table 1).

For the purpose of this summary, producer’s size is defined based on 2007 planted acres or 2007 head marketed (see Table 1). After the responses were received and tabulated, the commercial producer category was divided further to determine if there were differences in the attitudes and opinions of the very large producers. The largest 15% of the commercial operations (termed “large”) have been grouped together and compared with the remaining commercial producers (85%). A total of 252 producers were categorized “large”, 1,185 were considered “commercial” with another 910 considered “mid‑size”.

The majority of the respondents had graduated from high school, a two‑year college, or a technical/trade program. Cotton producers tended to be the most educated and dairy producers the least. As size increased, respondents were more likely to have received a higher level of education. 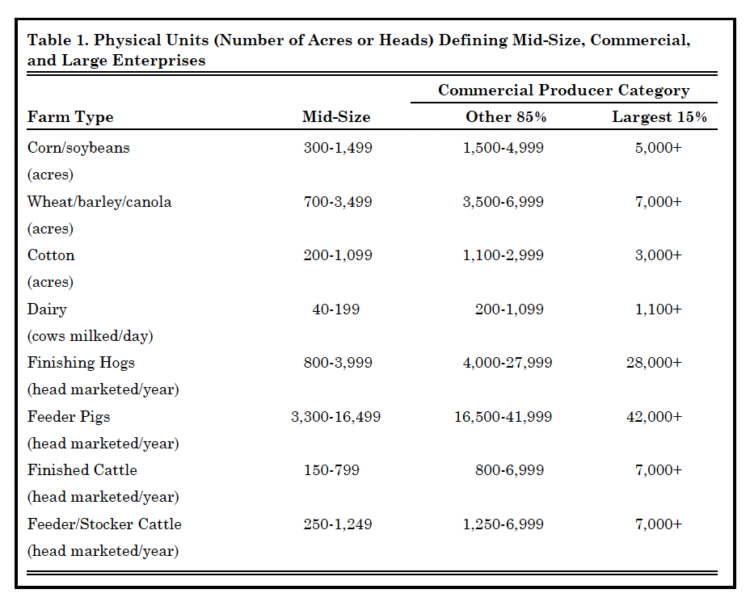 Most of the respondents generated between $100,000 and $999,999 in gross farm sales. High growth producers (those expecting to grow more than 50% in size over the next 5 years) reported greater gross farm sales than their counterparts. Com‑ pared to previous surveys, gross farm sales had increased dramatically (see Figure 1). 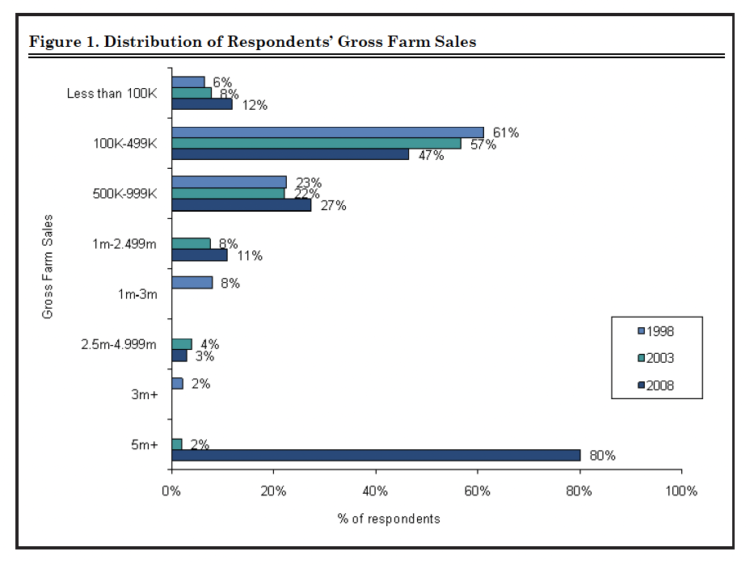 Respondents were asked to report their number of acres or head marketed in each enterprise for 2007 and their expectations for 2012.  Compared to the 2003 survey, overall farm sizes had increased modestly; finishing hogs and feeder pigs had seen the most change.

To grasp better the anticipated change over the next five years, beyond a numeric growth rate, respondents were asked to describe how their farming operation may change in business enterprise focus over the next five years. The majority selected the category “remain the same”. This was particularly true for cattle producers. High growth producers were more likely to become more specialized. Relative to previous surveys, the category “remain the same” was selected more often this time.

Prices were more important for high growth producers. Weather conditions at planting time were less of a criterion for corn/soybean producers. 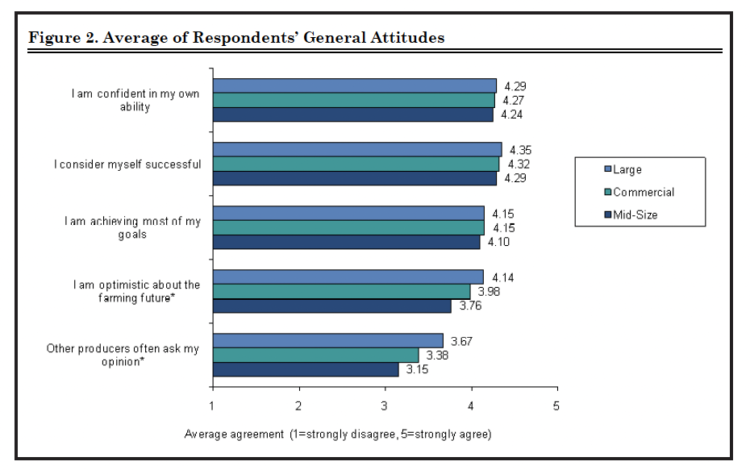 a concern for large (see Figure 3), hog, and wheat/barley farms. Com‑ pared to normal growth producers, high growth producers were less concerned by profitability and more by marketing. When the study was completed, market volatility in nearly all agricultural commodities was much on the minds of farmers making marketing more of an issue than in past surveys. Compared to the 2003 survey, management was also mentioned more frequently in this survey. 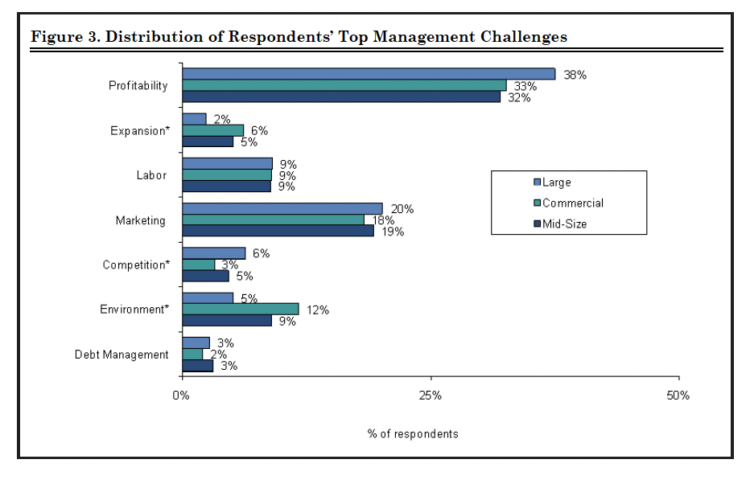 Finally, the types of management tools and techniques that producers are using to help achieve their goals and address the above management challenges were explored. A total of nine different tools and techniques were considered. Crop insurance, membership in a cooperative, and for‑ ward pricing for products produced or inputs purchased were the most frequently cited by producers. In most cases, the larger the farm business, the more likely they were to use a specific tool/technique (see Figure 4). 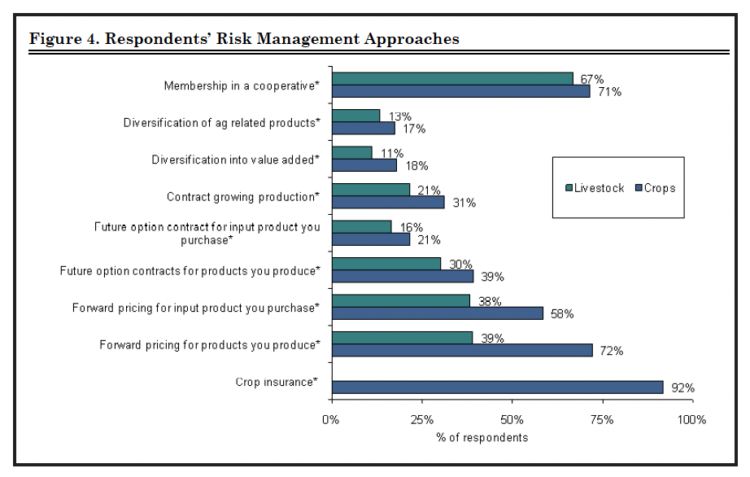 Input suppliers, extension educators, and associations have many avenues through which to communicate with producers. The survey indicates that producers preferred messages delivered through printed materials (see Figures 5 part 1 and 5 part 2). More than one‑half of producers indicated that they never or rarely find agricultural e‑mails or Web sites useful. Just less than three‑fourths of respondents indicated that they find general farm publications and agricultural newspapers sometimes, often or always useful. Ag websites and emails were not found as useful by the 65+ age group. Interestingly, all communication medias (except Ag TV programs) were found less useful than in past surveys. 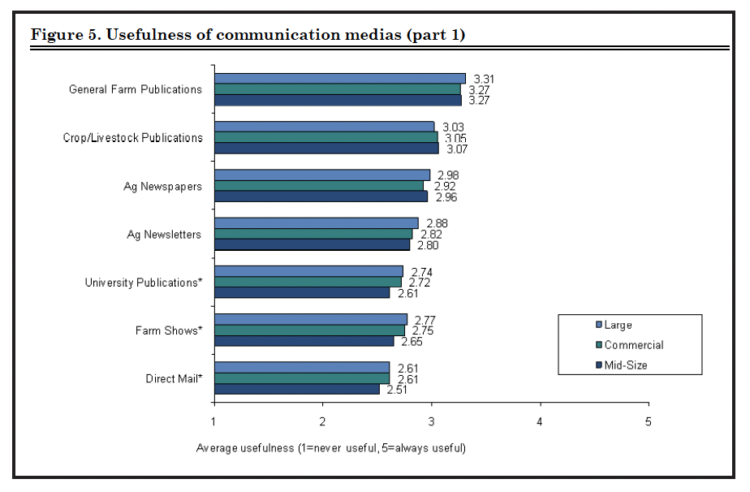 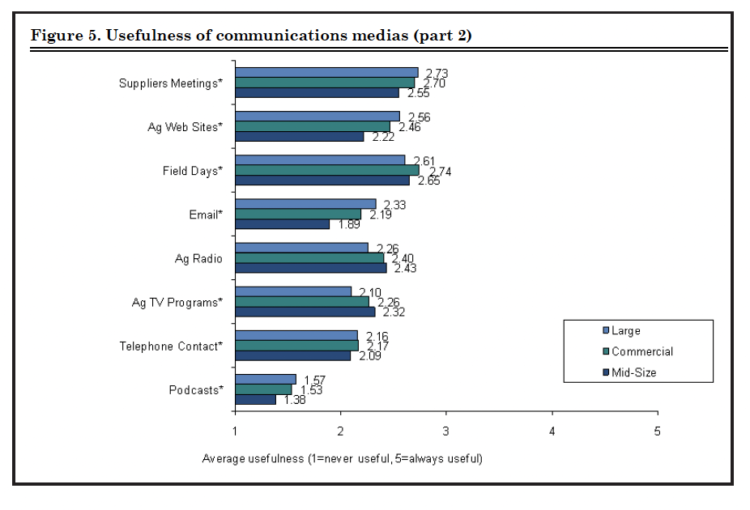 The 2008 survey occurred at a time of high agricultural prices and margins. Hence, producer attitudes likely reflected those market conditions. Compared to 2003, they found themselves more confident, more successful and more likely to achieve their goals. Such attitudes have important implications for suppliers’ sales and marketing strategies. Producers are likely to welcome products, services and information. And, the larger the operation, the more closely other producers watch them.

Consequently, getting a new product on a large farm is likely to generate word‑of‑mouth promotion benefits with other producers.

Given these uncertain times, farmers are likely to be more interested in risk management tools, such as forward pricing. Helping today’s producers means assisting them with their management and marketing issues, along with offering risk management tools. These tools will probably become more critical to farmers as the economic crisis continues. Choosing the right communication channel to deliver this message will also be important – traditional communications media such as farm publications still count.