Despite increasing by 15.5% in 2021, farmland prices in west central Indiana are still 2.4% below their peak in 2014.  Compared to historical prices, however, farmland prices in west central Indiana are 88% higher than they were in 2010 and 410% higher than they were in 2000 (for current land values see Kuethe in this edition of PAER).  Concerns are periodically expressed by many investment analysts that farmland prices are higher than justified by the fundamentals.  One justification for this concern is that previous research has established the tendency of the farmland market to over-shoot its fundamental value.

A standard measure of financial performance most commonly used for stocks is the price to earnings ratio (P/E).  A high P/E ratio sometimes indicates that investors think an investment has good growth opportunities, relatively safe earnings, a low capitalization rate, or a combination of these factors.  However, a high P/E ratio may also indicate that an investment is less attractive because the price has already been bid up to reflect these positive attributes.

This paper computes a ratio equivalent to P/E ratio for farmland, the farmland price to cash rent ratio (P/rent), and discusses trends in the P/rent ratio.  We use land value and cash rent data for the 1960 to 2021 period for west central Indiana to illustrate the P/rent ratio.  Data from 1975 to 2021 were obtained from the annual Purdue Land Value and Cash Rent Survey.  For 1960 to 1974, the 1975 Purdue survey numbers were indexed backwards using the percentage change in USDA farmland value and cash rent data for the state of Indiana. 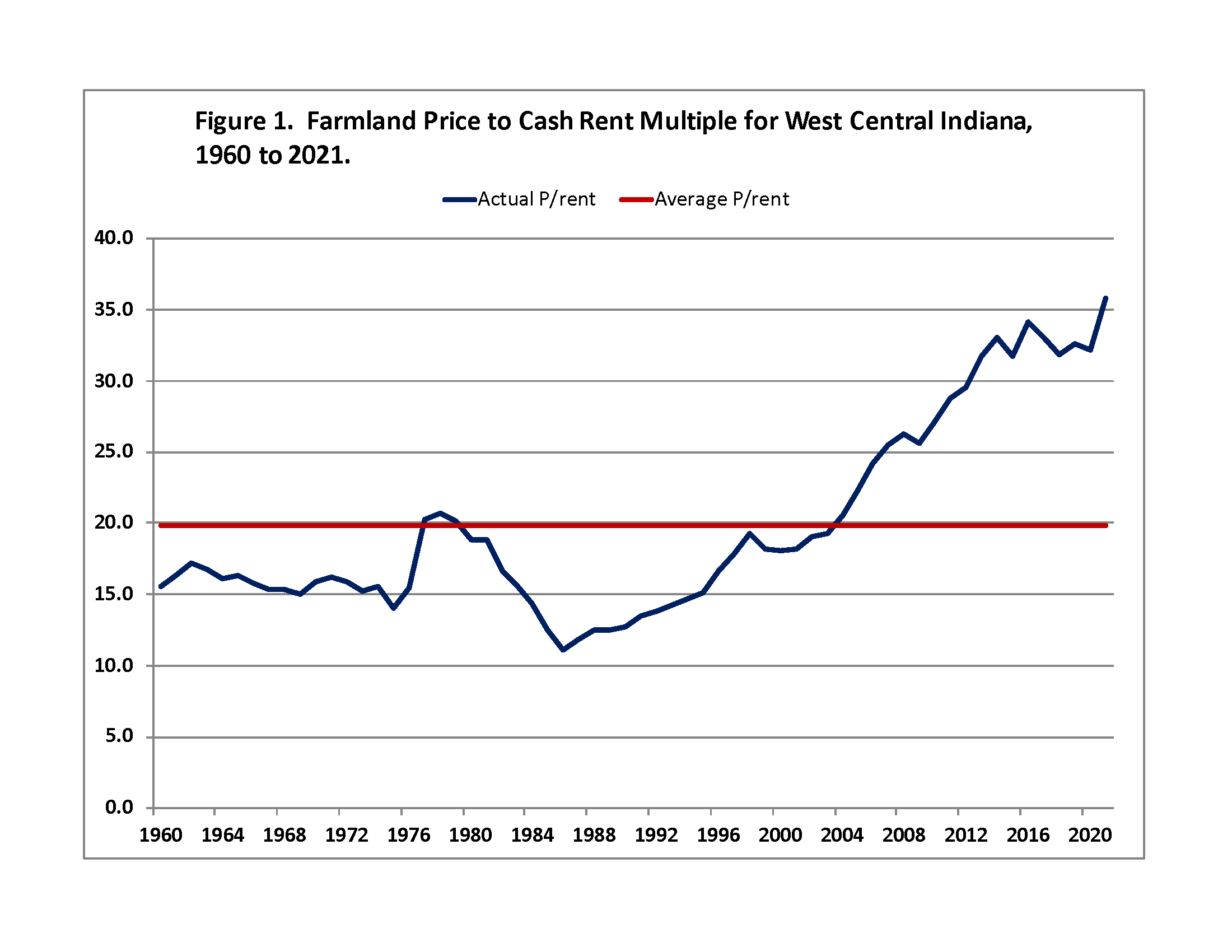 The P/rent ratio has been above the long-run average since 2004.  From 2004 to 2014, the P/rent ratio increased from 20.6 to 33.0.  Since the peak in land values in 2014, the P/rent ratio has ranged from 31.7 in 2015 to 35.8 in 2021.  The current value of 35.8 is relatively high compared to the historic average of 19.8 and a previous high of around 20, and thus at least raises concerns that current farmland prices are overvalued in relationship to returns.  Having said that, one of the reasons often mentioned as a major explanatory factor associated with the recently high P/rent ratio is low interest rates.  The average interest rate on 10-year treasuries from 1960 to 2021 was 6.1%.  The interest rate on 10-year treasuries has been below its long-run average since 1998.  Moreover, the rate has not been above 4% since 2008 and has not been above 3% since 2011.

Over the 61-year period from 1960 to 2021, the P/E ratio for stocks is 19.8, which is similar to the long-run average P/rent ratio.  Though the long-run averages are similar, the P/E and P/rent ratios do not necessarily track one another.  The average correlation coefficient between these two measures is only 0.36.  Though not the topic of this paper, diversification potential between the stock market and farmland is relatively high.

Shiller (2005; 2021) uses a 10-year moving average for earnings in the P/E ratio, often labeled either P/E10 or cyclically adjusted P/E (CAPE), to remove the effect of the economic cycle on the P/E ratio.  When earnings collapse in recessions, stock prices often do not fall as much as earnings, and the P/E ratios based on the low current earnings sometimes become very large (e.g., in 2009).  Similarly, in good economic times P/E ratios can fall and stocks look cheap, simply because the very high current earnings are not expected to last, so stock prices do not increase as much as earnings.  By using a 10-year moving average of earnings in the denominator of the P/E ratio, Shiller has smoothed out the business cycle by deflating both earnings and prices to remove the effects of inflation.  Shiller also uses the P/E10 to gain insight into future rates of return.  That is, if an investor buys an asset when its P/E10 is high, do subsequent returns from that investment turn out to be low, and vice versa? 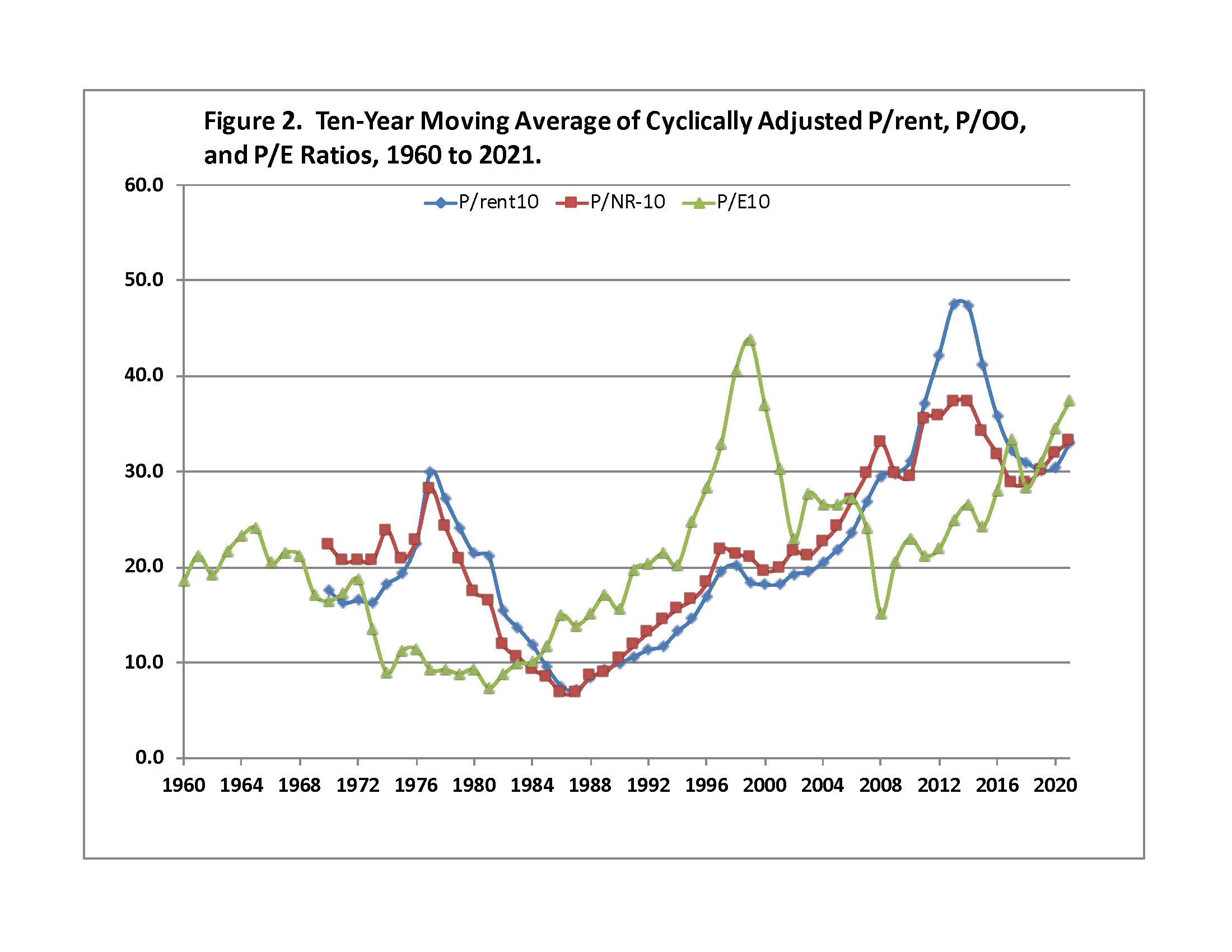 Buy at a High Ratio: Get a Low Future Return?

Shiller also discusses the relationship between the P/E10 ratio and the annualized rate of return from holding S&P 500 stocks for long periods.  In general, his results show that the higher the P/E10 ratio at the time of purchase, the lower the resulting multiple year returns, like for the next 10 or 20 years.  The west central Indiana farmland and cash rent data from 1960 to 2021 are used to compute 10-year and 20-year annualized rates of return.  Returns are the sum of the average of cash rent as a fraction of the farmland price each year, plus the annualized price appreciation over the holding period.

The results for farmland show a negative relationship similar to that exhibited in Shiller’s stock data. The 10-year holding period returns for farmland show a strong negative relationship (Figure 3).  That is, if one purchased farmland when the P/rent10 ratio was very high, like now, they tended to have a low 10-year rate of return.  Alternatively, if one purchased farmland when the P/rent10 was intermediate or low, they tended to have moderate to high 10-year returns.  The 10-year returns ranged from a small negative to 20%.  The 20-year holding period returns also exhibit a strong negative relationship with the P/rent10 ratio (figure 4).  The 20-year holding returns range from 6 to 14%. 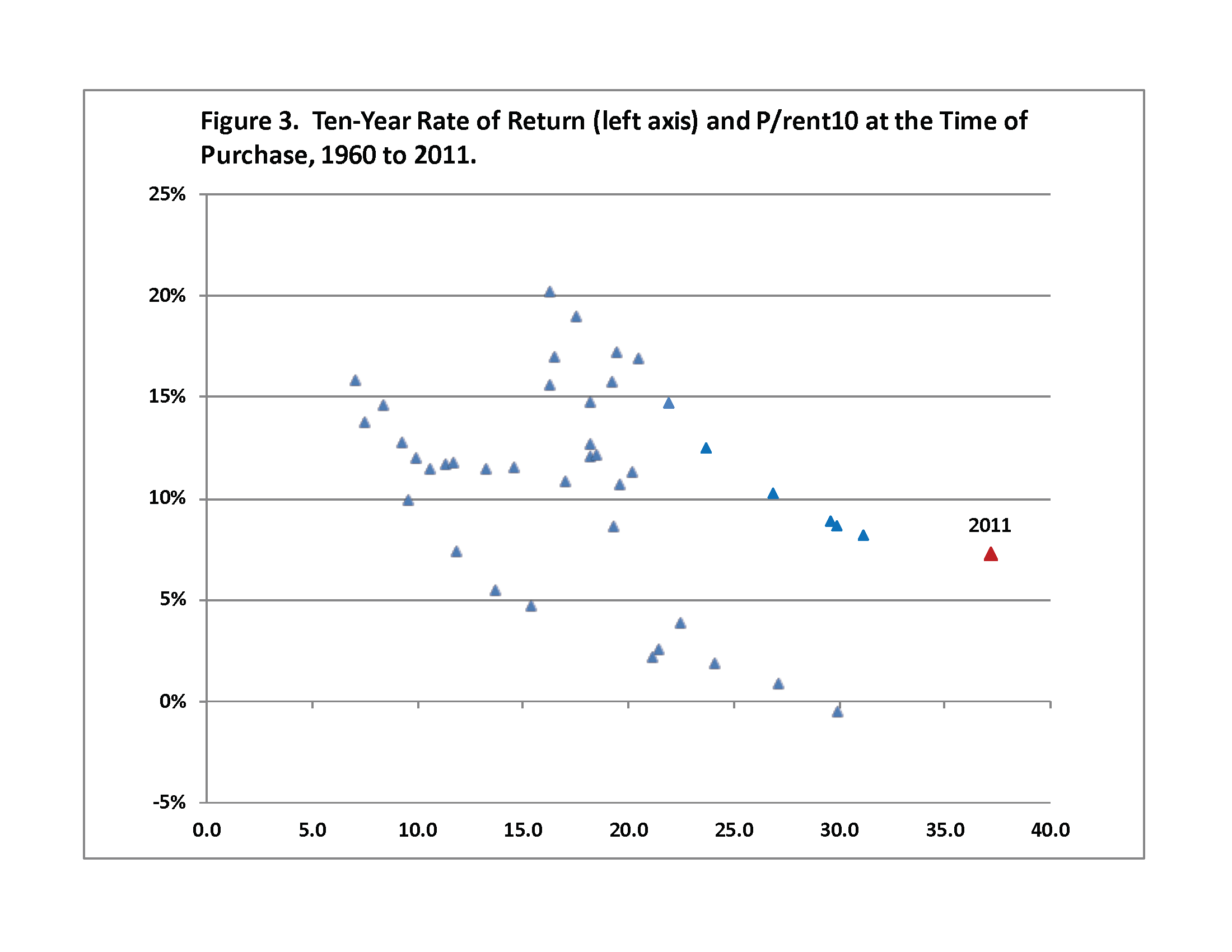 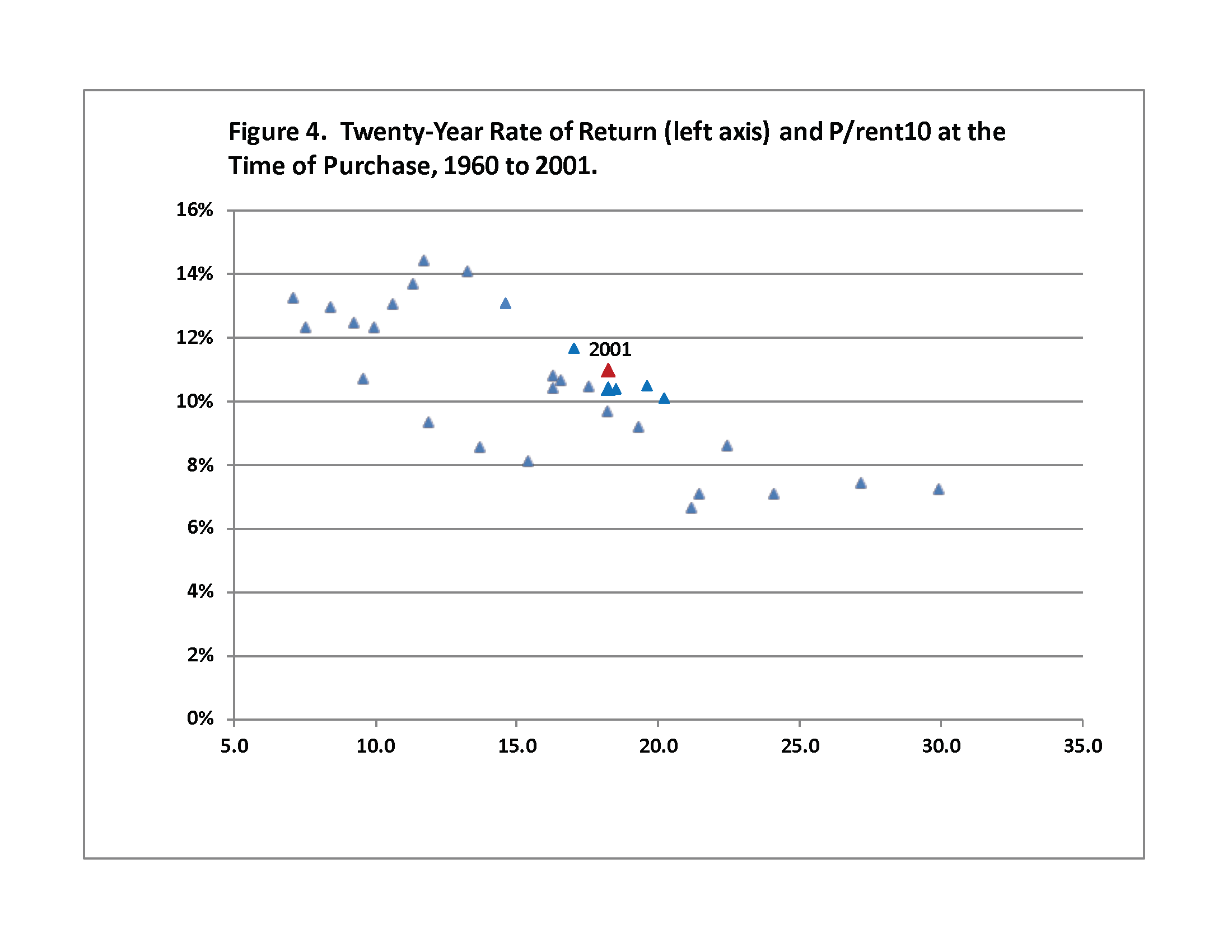 Our analysis indicates that the P/rent ratio (price per acre divided by cash rent per acre) is substantially higher than historical values.  In order to maintain the current high farmland values, cash rents would have to remain relatively high, and interest rates would also have to remain very low.  Most agricultural economists expect crop returns to remain relatively strong in the next couple of years, mitigating downward pressure on cash rents, and for interest rates to remain similar to current levels in coming years, providing support for the current P/rent ratio.

Our reading from examining 61 years of history is that the current relationship between farmland prices and cash rents suggests that farmland prices are elevated.  If we are correct, this means that those purchasing farmland at current prices may experience “buyer’s remorse” in coming years.  But having said this, there remain some possible situations in which farmland values could be maintained or even increase.  Positive influences on land include low interest rates, the relatively small percent of land currently on the market, the attractiveness of farmland to pension fund managers, and the fact that land is a good hedge against inflation.

A comparison of the Purdue Land Values and Cash Rents Survey with a detailed transaction record to highlight transaction volumes, prevailing per acre prices, and the relative strengths of each source.