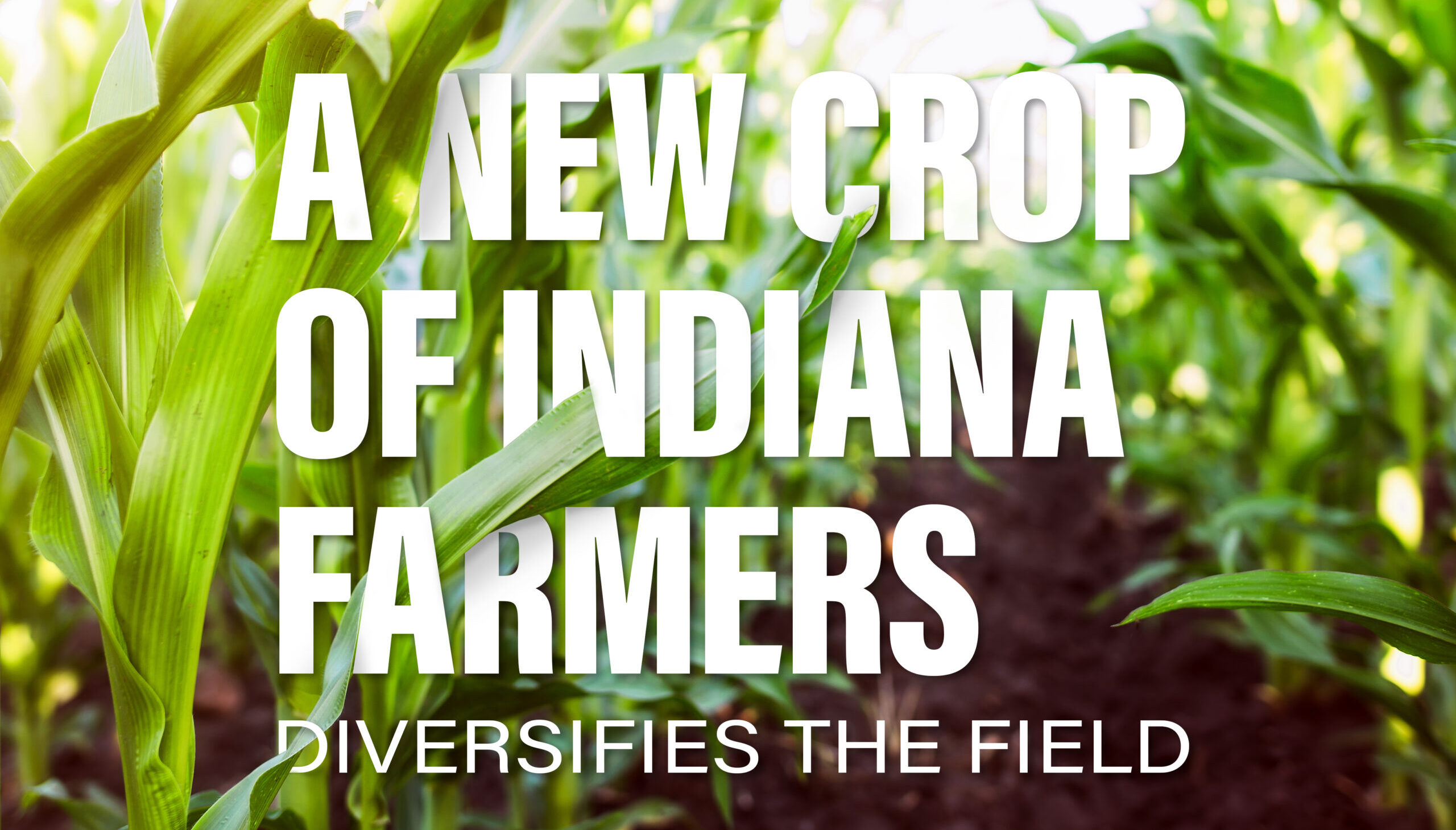 When you imagine a typical Indiana farmer, United States Department of Agriculture (USDA) statistics indicate a 55-year-old man growing a portion of the 11 million acres of corn and soybeans produced in the state. Perhaps you see him out tilling inherited land that’s belonged to a family that for generations has helped Indiana achieve its status as an agricultural leader.

This group of Indiana farmers have backgrounds just as diverse as their production methods, and Purdue Extension wants to see them succeed.

When you imagine a typical Indiana farmer, United States Department of Agriculture (USDA) statistics indicate a 55-year-old man growing a portion of the 11 million acres of corn and soybeans produced in the state. Perhaps you see him out tilling inherited land that’s belonged to a family who, for generations, has helped Indiana achieve its status as an agricultural leader.

This group of Indiana farmers have backgrounds just as diverse as their production methods, and Purdue Extension wants to see them succeed.

Reverend Marty Henderson has glowing memories of summers spent down south on his grandparents’ farm in Louisiana.

“They raised everything. Chickens, pigs, peas, beans, tomatoes, okra, watermelons, pumpkin, cotton, corn,” he remembers. “I’d go down there and gain so much weight. My grandfather had a long watermelon patch and a shed that was always stocked with watermelon. He told me to go and help myself. I did.”

RETURNING TO HIS ROOTS

In Gary, Henderson’s work at Peace Baptist Church tapped back into his agricultural roots around the time of the 2008 recession. His church had purchased 6 acres to build a new worship space, but couldn’t after the economy dipped.

Fast forward to 2020: Henderson and many of his family members and parishioners struggled to recover from COVID-19, the pandemic made it difficult to recruit volunteers, and a storm damaged the operation’s hoop houses. But Henderson and Peace Baptist Church remain undaunted, hoping to eventually take their food production up a notch — to the fish tank and the rooftop. Henderson serves as a Purdue Extension – Lake County board member and through that connection, found the Purdue College of Engineering’s EPICS service-learning program. EPICS will provide five years of support to his dream to develop an aquaponics operation (using the waste from aquaculture for hydroponic veggies) and a rooftop garden on the 18,000-square-foot space of a former U.S. Army building. His goal is to provide produce to 80 families per week.

“Tamara Benjamin has been invaluable for this whole process,” Henderson says.

Benjamin, Purdue Extension’s assistant program leader for Diversified Farming and Food Systems, sees her job as providing support to all of Indiana’s farmers who fall outside the norm of Indiana agriculture.

“The Diversified Farming and Food Systems (DFFS) program supports all farmers,” Benjamin explains. “Sometimes they can be found in places we least expect them, such as urban areas in Indianapolis or Gary. Our goal is to support farmers who might not be considered the typical farmer.”

That’s why Purdue Extension created a position to support grain farmers who want to make the transition to organic production. It was an idea bubbling for some farms around Indiana, like Steiner Family Farm in Adams County. Purdue Extension’s DFFS program wanted to help them network with others with similar goals across the state.

For many farmers, their county network is the strongest point of connection, but if you have an idea like growing organic soybeans, there may not be others in your county with experience.

“We have a typical family farm. My dad has always grown corn, beans, wheat and hay,” says Kathy Reynolds, half of the daughter–father combo turning Steiner Family Farm into Steiner Organic Family Farm. Their land has been in the family since the 1860s.

“Dad is an out-of-the-box thinker. He was the first in his county to try no-till,” Reynolds says. That same quality led her to travel to Peru and Switzerland as an undergraduate to learn about agriculture in other cultures.

Her dad, George Steiner, decided to shift toward organic for two reasons: higher profit and soil sustainability. “Environmentally, it’s something we’ve got to look at — we need to take better care of our ground,” Steiner says. He has always rotated hay in his fields for soil health, something recommended in the Purdue short course he took in 1979.

“I kinda like seeing that grass, and I don’t have near the trouble with water filtering through the field,” he says. “We get more erosion with just corn and beans, and the soil gets lighter in color, losing the vital organic matter.”

The Steiner family is eight years into their organic transition, and Purdue Extension’s former DFFS organic educator Michael O’Donnell provided crucial support for them along the way. There are more than 600 certified organic farms in Indiana, and O’Donnell brought together farmers who are transitioning to organic grain at a variety of programs like summer field days and a two-day winter conference.

“The gap I tried to fill is network facilitator,” O’Donnell explains. “Along with being an information resource about organic production and certification, I helped connect them to other people like agronomists, buyers and other organic farmers.”

It’s common for grain farmers to meet up at a local coffee shop to talk about their crops and equipment. When Steiner decided to go organic, the DFFS program filled that gap. “The Purdue field days are kind of our replacement coffee shop,” Reynolds says. “It’s nice to chitchat with other farmers who are growing organically.” 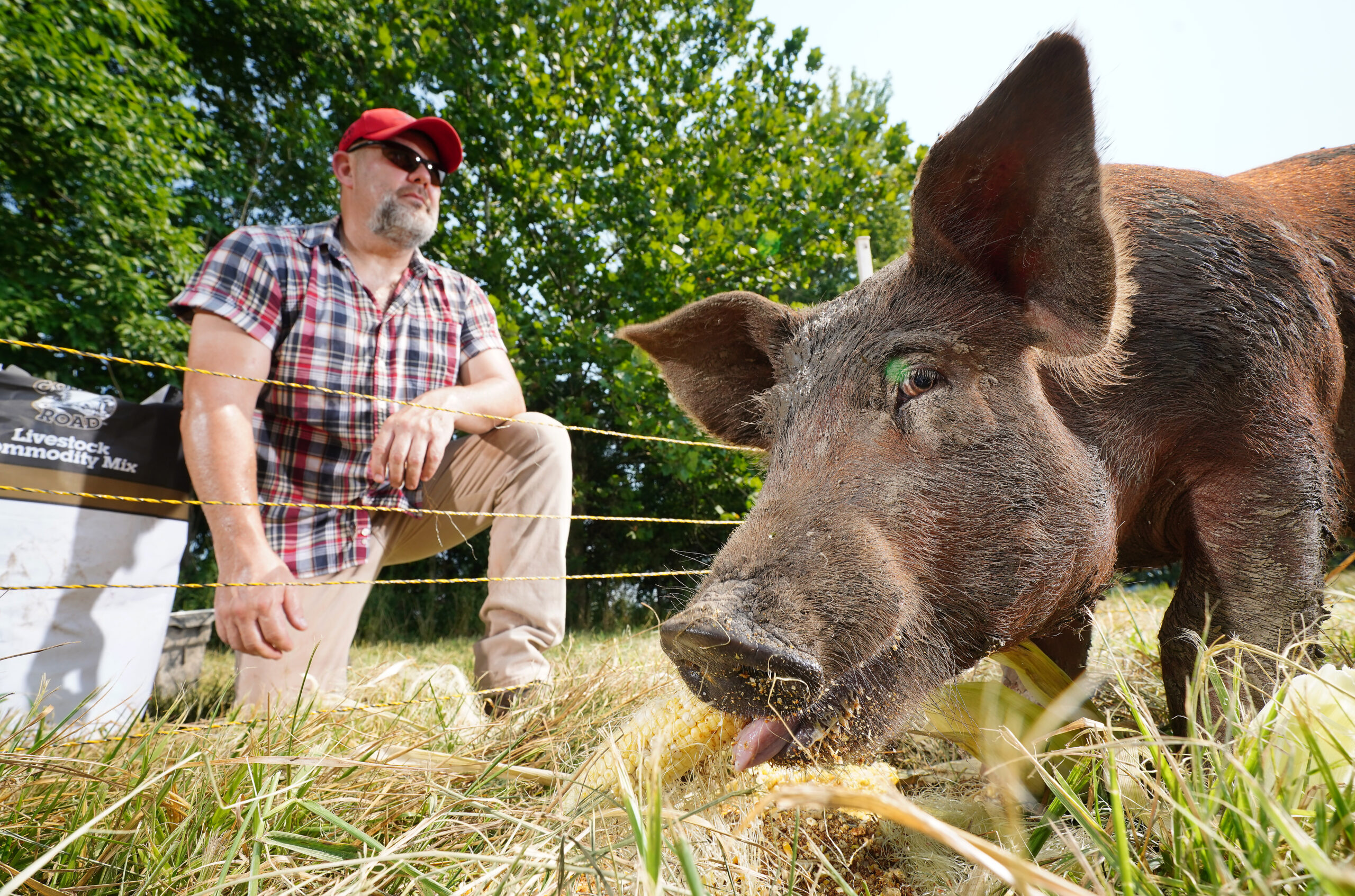 When new farmers are getting off the ground, learning from others who have similar backgrounds can be helpful. That’s especially true for another group of first-generation farmers the DFFS program supports: military veterans.

Some veterans may be from a farming background, but many who aren’t still see it as their future, explains Indiana AgrAbility’s veteran outreach coordinator Cindy Chastain. Chastain is a bridge between groups like Farmer Veteran Coalition, Indiana AgrAbility, and Purdue Extension.

“There’s a whole litany of reasons veterans are suited to farming,” Chastain says. “Almost half of veterans come from rural communities. They may not have grown up on a farm, but they’re familiar.” And after their service, many veterans prefer to work outdoors with their hands and do something that continues fulfilling their call to serve.

“There’s a whole litany of reasons veterans are suited to farming,” Chastain explains. “Almost half of veterans come from rural communities. They may not have grown up on a farm, but they’re familiar.” And after their service, many veterans prefer to work outdoors with their hands and do something that continues fulfilling their call to serve.

“There are a lot of veterans getting into farming,” says first-generation livestock farmer Darin Chapman, a veteran who served in the Air Force during the first Persian Gulf War. “The rural environment helps with post-traumatic stress disorders and traumatic brain injuries. We’re used to being outside and using heavy equipment in dirty conditions. Plus, we like to serve, and this gives us a way to serve our communities from behind the scenes.”

For his business Farm Delicious, Chapman raises heritage hog and chicken breeds to sell into specialty markets like charcuterie makers. For himself and his family, he also raises a wide variety of vegetables and keeps bees. Over the years, he’s fueled his interest in sustainable food production through continuing education from Purdue Extension, including a shiitake mushroom workshop and a beekeeping course. Chapman raises his animals on 16 acres and plans to stay small.

“I want to provide the best quality animal welfare and use restorative practices for the land,” Chapman says.

Veteran farmer Matthew Harvey explains his goal another way. “I needed a new mission,” Harvey says. After growing crops in his downtime during his deployment to Afghanistan, he found that mission on a 19-acre piece of land outside Terre Haute, where he raises chickens and hay and grows vegetables to help feed his community.

“If food is trucked halfway around the world before it gets to you, that can’t be all that great for you or for the planet either,” he says. At Harvey Organic Farm, he enjoys providing the freshest food possible to his family and customers. Plus, he feels it’s a great place for his 5-year-old son and 3-year-old daughter to grow up.

“My son’s favorite crops are pumpkins and sunflowers, so we always grow some of those,” Harvey says. “I want to keep him interested in the farm. When he helps with things, he feels happy and accomplished.”

Harvey has also raised bees and planted 11 acres of bee-friendly pollinator plots. He’s exploring raising the Mulefoot hog, which is on the The Livestock Conservancy’s endangered list, and would also like to raise Wagyu beef in the future.

Chastain connected both Harvey and Chapman to DFFS programs like the Beginning Farmer farm tours and workshops specifically geared toward veterans who were new to farming. She reaches more than 400 people with her Indiana veteran farmers email listserv, connecting them with others who share their understanding of post-military life and swap ideas on how to farm.

That, Benjamin says, is the highest achievement of the DFFS program: bringing people together into a supportive network to help them achieve their agricultural goals. Whether urban farmers, organic farmers, veteran farmers or any other specialized group in agriculture, DFFS wants to give them a place within Purdue Extension and Indiana’s farming community to call home.

“Our biggest accomplishment is the fact that the Hoosier Young Farmers Coalition started, continued and is vibrant,” Benjamin says. Started in 2016, the coalition’s mission is to "collaborate in making our food systems more localized, sustainable and just.”