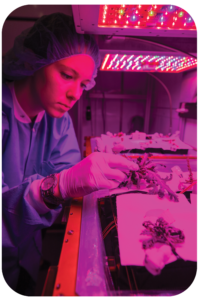 When Jess Bunchek (BS ’15, botany and plant pathology) started her undergraduate degree, her dream was to work in space exploration. Her passion, however, was plants, not engineering. She didn’t think plants and outer space were compatible career interests, so she buckled down in the plant sciences and kept her curiosity for space as a hobby. Years later, she found herself simultaneously writing a weed management master’s thesis (at Penn State) while livestreaming the International Space Station (ISS) webcam just for fun. Watching astronauts tinker with space equipment 250 miles above Earth, she decided to Google NASA internships. She was amazed to find a plant scientist opening and excitedly applied.

Now Bunchek is starting her second year at NASA as a full-time plant scientist and pseudonaut — someone who keeps her feet on Earth but mimics everything an astronaut does in space to rigorously ground-test methods. Bunchek perfects techniques for raising crops like lettuce and peppers that astronauts grow and harvest on the ISS.

The ISS is a difficult place to grow food. With almost zero gravity, even something as simple as watering a plant becomes a major challenge. Without gravity, water poured onto soil doesn’t percolate; it forms droplets that hover on the soil’s surface. So all soil must be enclosed in a flexible container, and water is added through a specially designed ring that distributes it evenly in the soil.

“Theoretically, it would be so easy to grow plants on the moon compared to the space station,” Bunchek says. “The moon has one-sixth of earth’s gravity rather than microgravity (like the space station), so water would flow downward.”

The fundamental plant sciences like physiology and plant genetics that Bunchek learned at Purdue come in handy as she tweaks plant growth in such unusual conditions. So far, crops that have succeeded both in her pseudonaut laboratory and on the ISS include mizuna mustard greens, kale and a dwarf version of bok choy.

Next up, Bunchek and her team are looking forward to growing a spicy pepper in space, where astronauts crave flavorful foods. Some astronauts have a decreased sense of taste in space, because without gravity, body fluids shift toward their heads and create conditions mimicking a head cold. That makes a spicy pepper an appealing addition to dinner. (Jacob Torres, an alumnus of the Purdue Polytechnic Institute, is working on those experiments with the Española chile pepper.)

Degrees offered in the College of Agriculture provide a valuable foundation of knowledge, contributing to NASA’s pioneering work in ways you might not expect. Professor Roger Hoffer understood that in 1979 when he encouraged his forestry master’s student Ross Nelson to apply for a NASA job. NASA wasn’t hoping to grow trees on the moon, but rather to look back at Earth’s forests and map how they change over time. While NASA is best known for exploring space, the data it generates from its high-flying perspective also contributes important knowledge about Earth. 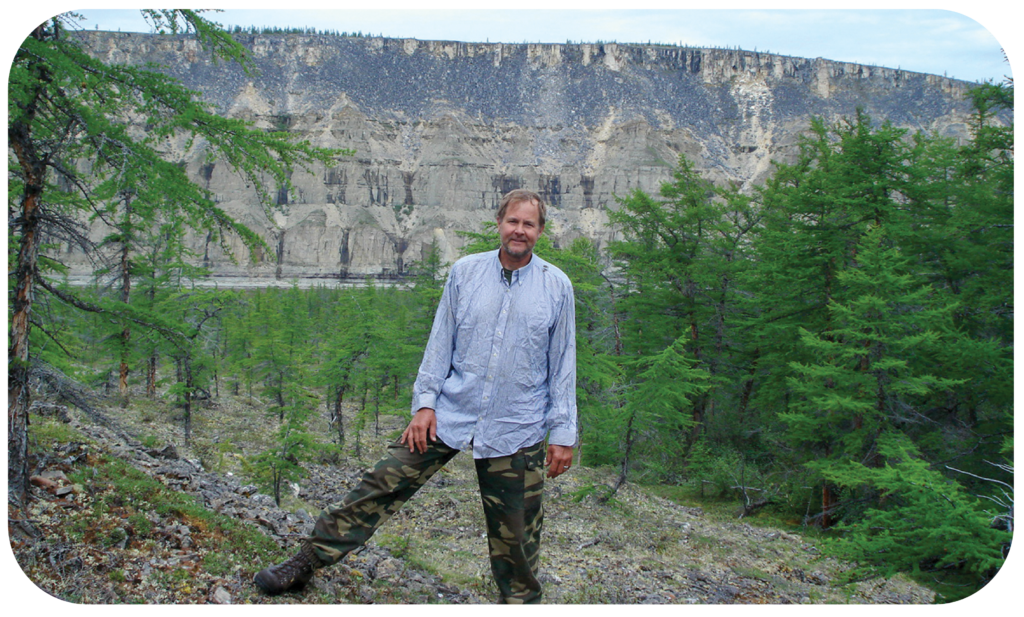 Nelson (MS ’79, forestry) graduated with a cutting-edge technical skill: the ability to interpret satellite data and turn it into maps. With new streams of satellite data pouring in, NASA was exploring the many ways to use them, and hired Ross to map and monitor the world’s forests. After starting at NASA fresh from graduate school, Ross stayed for his entire 36-year career, retiring in 2015. At NASA he kept tabs on the world’s trees by using a mixture of ground data, like tree diameter, and aerial data, such as airborne and space laser measurements, which provided tree height.

One reason NASA is interested in how forests change is because approximately 50 percent of a dry tree is carbon. If trees burn, undergo massive mortality events due to insect pests or diseases, or are cut down and converted to nonforest uses, much of that carbon ends up back in the atmosphere, further fueling climate change.

The quality of the aerial data Ross worked with over his career improved with mind-boggling leaps in technology. Some of the first data he analyzed was collected by an instrument that fired a laser 400 times per second. By the time he retired, he was using equipment that fired 350,000 times per second. Now satellite technology can shoot photons (individual particles of light) from space to Earth and map the surface of our planet.

“This technology is magic to me,” Nelson says.

Like Bunchek’s plant science research, Nelson’s career involved constant problem solving. Much of the equipment he normally used to measure forests around the world wasn’t sent up into space to look down at trees. A lot of his satellite data was intended to measure changing ice sheets at the poles, and he had to adapt protocols to make that data work for forests, too.

Both Nelson and Bunchek credit the College of Agriculture for preparing them to work at this highly technical and creative edge of scientific research with NASA. Understanding the science of forests and food crops, it turns out, helps expand what humans can do from outer space.