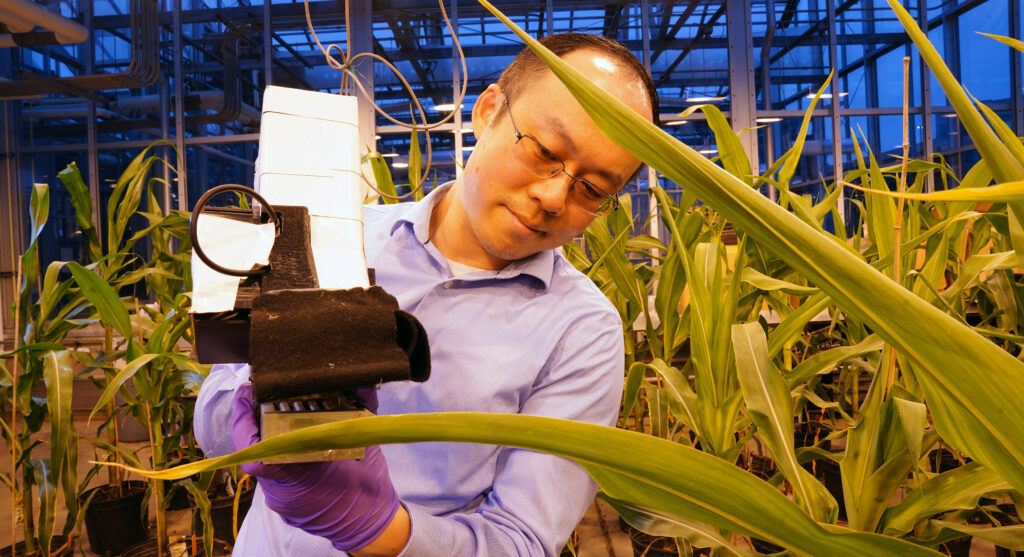 LeafSpec, a portable hyperspectral leaf imaging device developed in the lab of Jian Jin, assistant professor of agricultural and biological engineering, recently won a 2021 Davidson Prize. This award from the Association of Equipment Manufacturers and the American Society of Agricultural and Biological Engineers recognizes the year’s top three innovative products in agriculture.

LeafSpec uses hyperspectral imaging, which is more precise than a regular camera, to scan a leaf in the field or greenhouse and determine leaf moisture, chlorophyll content, nutrient levels, and indicators of disease or insect damage.

The information is then relayed in a user-friendly interface on a scientist’s or farmer’s smartphone, thanks to a processing algorithm and software developed by Jin and Carol Song, senior research scientist in the Information Technology at Purdue research computing division. That interface can help guide when a farmer should water, fertilize a field, or address specific diseases or other plant stressors.

If the smartphone is connected to the internet, a GIS interface will also provide location, time and weather for each leaf scanned. The combined data from such scans has the potential to predict regional crop health and yield.

The idea was originally funded from a proposal by Jin and Gerald Shively, associate dean and director of International Programs in Agriculture and professor of agricultural economics, at a College of Agriculture Ideas Lab for interdisciplinary projects. It’s also had support from the Indiana Soybean Alliance and Purdue’s Office of Technology Commercialization.

“Purdue is probably the only place in the world that has the plant scientists, sensor engineers, data scientists and social scientists collaborating together to introduce a technology like this,” Jin says.