ONE FOOTPRINT AT A TIME 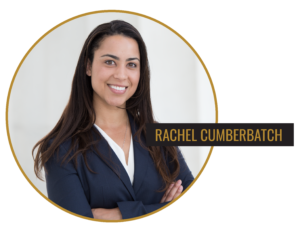 George and Nancy Morton have attended many College of Agriculture scholarship dinners, but the remarks one recipient delivered have stayed with them. “The title of her speech was ‘Going Through College $2000 at a Time.’ And the idea was that she took the time and effort to fill out all the scholarship requests that she could find,” recalls George (BS ’58, agribusiness management).

That student, Rachel Cumberbatch, received more than one scholarship funded by the Mortons: one from their endowment for agriculture students with the Boone County Community Foundation, and another from their endowment at Purdue. She earned her bachelor’s degree in animal sciences in 2007, served as the student member of the Purdue University Board of Trustees and received the Flora Roberts Award for Purdue’s outstanding senior woman. She then earned her doctor of veterinary medicine at Purdue, and now works as the director of international and regulatory affairs at the Animal Health Institute in Washington, D.C.

George and Nancy (BS ’61, elementary education) are proud of how Cumberbatch has excelled, step by step, one scholarship at a time, building her career through hard work. It’s an apt metaphor for how sustained giving advances the College of Agriculture. As Ever True: The Campaign for Purdue draws to a close, alumni and friends like the Mortons, who have given to Purdue for 40 years, have made lasting impacts on students, faculty and the College of Agriculture campus. 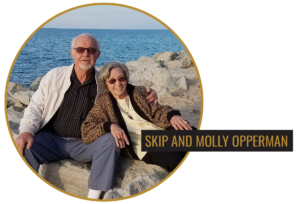 Offering opportunities to students motivates Skip and Molly Opperman. “I think graduating from Purdue opened up a lot of doors in my employment opportunities. Since those opportunities helped me get ahead in the world, I thought I would give back,” says Skip (BS ’60, biochemistry). He remembers having few places to study and collaborate when he attended Purdue. “The only place you went was the lounge at the dorms or the library — that was just about it. It was very insular in that regard,” he says. He funded a student lounge in the upcoming biochemistry building renovation project, which he hopes will allow for more interaction among students.

That interaction is what Bill Hagemeier appreciates most about his own Purdue experience. “I can tell you it’s expanded my horizons. It isn’t just what I learned, it’s the people I met and the contacts I made … that in a nutshell is what I earned from my education at Purdue,” he says. 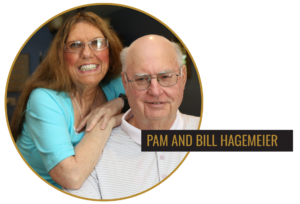 Hagemeier (BS ’68, animal sciences) and his wife Pam established a multiuse endowment for animal sciences, which funds scholarships as well as a classroom space in the new Hobart and Russell Creighton Hall of Animal Sciences. He credits Purdue’s investment management for the growth in the number of scholarships awarded from the endowment — from three or four in the first year up to 10 in subsequent years.

Those scholarships launch students from education to careers where they make their own mark. That inspires Austin Frishman (PhD ’68, entomology), who thinks about impact on both a local and global scale. “I know the positive impact an education has had on me in terms of what I’ve been able to help contribute in my industry and to the general public,” he says. “So I look at the people coming out of school, saying, ‘They’re the future.’ If we look at poverty, hunger, war, pollution — how are they going to be solved? Through education.” 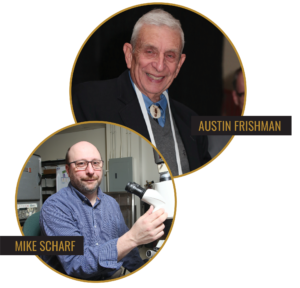 He supports a scholarship fund established in his name by colleagues and writes to every winner, staying in touch and encouraging them at Purdue and in their careers. He also supports faculty development funds and the Center for Urban and Industrial Pest Management. He saw how those gifts combined to come full circle in Mike Scharf, the first recipient of the Austin Frishman scholarship, who is now a professor and O.W. Rollins/Orkin Chair in the Department of Entomology.

Frishman is a legend in the pest control industry, but before that, he taught at the State University of New York at Farmingdale. “I always told my students in their first class, ‘You have to know more than your professor or the world goes backwards,’” Frishman says. “So that you must learn from different people and then go further than that.”

It’s the support of alumni and friends that allows the College of Agriculture and its students and faculty to take that next giant leap forward.

“The commitment of our donors to College of Agriculture students, faculty and facilities is what
makes the difference.”
KAREN PLAUT, GLENN W. SAMPLE DEAN OF AGRICULTURE