The Silent Work of Forests

In a mature forest, woody vines, flowering shrubs, ferns and other plants all blend together in a medley of greens and browns on a floor shaded by a thick overstory. To the casual hiker, a cluster of saplings standing a few feet tall isn’t much to stop and look at.

Gordon McNickle, however, sees something that most people don’t. Those saplings, just a few leaves shooting off from thin green stems, have been locked in a waiting game for years. If the opportunity arises, they’ll set off on an arms race that will end with only one survivor. 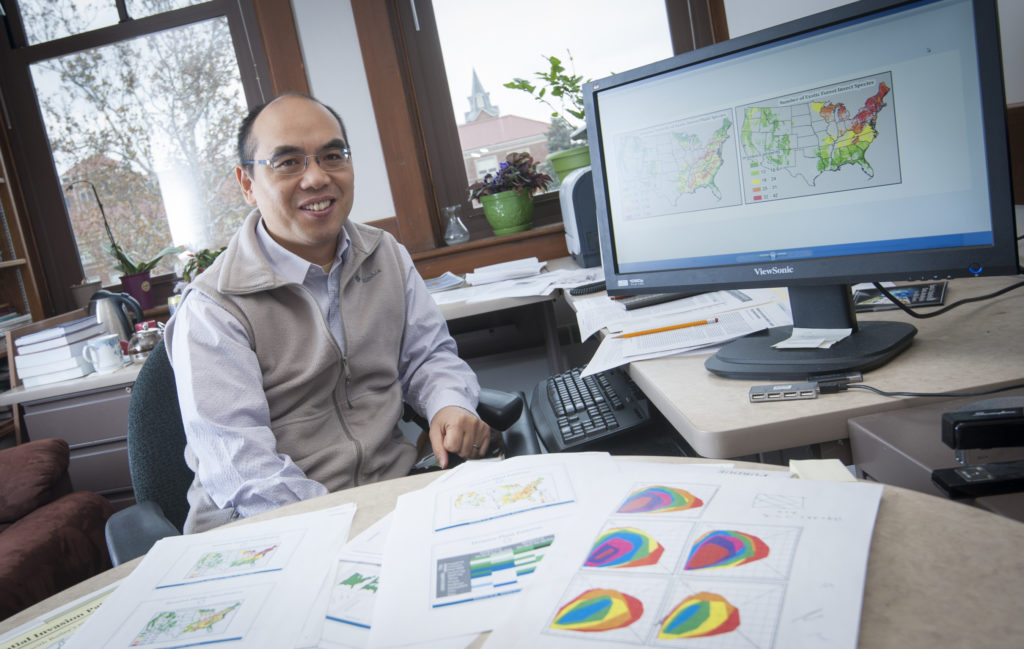 “When I was an undergraduate student on my first field job, I remember when forests changed for me. I went from seeing ‘this green thing’ to recognizing plants and identifying them by their Latin names,” says McNickle, assistant professor of botany and plant pathology. “Suddenly, it was like an impressionist painting coming into focus. It became a picture where the colors were working together to tell me more.”

Like a casual hiker, McNickle enjoys the forest views, chirping of birds and cool breezes that rustle leaves. But McNickle and other scientists studying forests can read a landscape and see the complex interactions that determine why certain plants are thriving, the unseen relationships of plants and underground fungi, and how climate and other variables are likely to make the same forest look starkly different decades from now. “When I walk out into a forest, I see competition. I see plants fighting for their lives,” McNickle says.

Where McNickle sees a contest, Songlin Fei sees a series of organisms coming together to benefit all people, but facing challenges that threaten that harmony.

“Forests are the silent workers. They don’t talk too much or get in the news that often, but they do a lot of services behind the scenes, providing habitats, cleaning air, purifying water, sequestering carbon and buffering various challenges we face,” says Fei, a forest ecologist in the Department of Forestry and Natural Resources. “Humans depend on them whether we realize it or not, but forests are being challenged by climate change, invasive plants and invasive insects. Because of our actions, we are seeing forests change in ways that threaten their abilities to provide services.”

Jingjing Liang, assistant professor of quantitative forest ecology, sees towering trees and thinks about all that’s happening, unbeknownst to most people, under the soil’s surface. Besides the ever-present searches for nutrients and water, tree roots make deals with fungi, providing carbon to the fungi in exchange for added reach, with the fungi acting like root extensions. These symbiotic relationships are significant in shaping forests and the services forests can provide.

“Although they are small and most are located in the soil, these fungi play a major role in the succession and functioning of forest ecosystems,” Liang says. “When we talk about managing forests to address an issue like climate change, that means a lot more than simply managing the trees.”

McNickle uses evolutionary game theory to understand the chess moves plants make against each other in an ecosystem. His models consider the ways plants react to their environments, competitors, predators and mutualistic partners. In particular, McNickle is interested in how plants have evolved not just to get the most benefit for themselves, but how they respond to nearby competitors doing the same thing.

“It’s a complicated interplay between two plants or a whole forest of plants. Imagine we’re both plants, but you’re taller than me. My best response would be to attempt to grow taller and get out of your shade. And that’s exactly what plants do.” McNickle says. “When you start to view a forest like that, it’s not the amount of wood in a tree that matters, or the height of a stem, it’s the amount of wood and height relative to a neighbor. The world looks the way it looks because of these equations.”

In a game like that, McNickle sees that cluster of deceivingly young saplings in a standoff. They may have adequate water and nutrients from the soil, but they don’t stand a chance without light.

So, the trees sit just a few feet tall, while the number of their leaves, leaf shape, the branching of their root systems and dozens of other traits position them for the moment that an older tree falls and opens a hole in the canopy. Then it’s off to the races, with the best-prepared tree sitting in the pole position.

“It’s like playing checkers or chess,” McNickle says. “You make moves to try to win, but you also make defensive moves, or you make a move to bait your opponent into a bad move. Plants are doing this all the time.”

McNickle tests his hypotheses by growing plants near each other to see if they respond as expected according to his equations and models. For more complex interactions, he turns to data collected from forest censuses that track the species of a forest over a long time period.

In summer 2019, McNickle took over the Ross Biological Reserve census work that Purdue biologist Alton Lindsey started a few miles west of campus in 1949. The census has taken place each decade since, with McNickle the third to take up the job after Kerry Rabenold, professor emeritus of biological sciences.

“After we complete the census this year, we’ll have 80 years’ worth of data to draw on to see why the Ross forest has changed as it has,” McNickle says. “Having that type of dataset is rare. It will open a lot of doors.”

Even larger datasets aid Fei, who has been tracking the movement of North American tree species in relation to climate change. In particular, he’s shown that trees are responding to more than just rising global temperatures.

“Forests are resilient because they do respond to climate change and move in the directions where the proper climate is available to them,” Fei says. “And we’ve shown that changes in moisture availability are a major driver of those shifts, in some cases even more so than temperature.

“There are people who doubt that climate change is happening, but here is solid evidence,” he adds.

Of the 86 species Fei tracked, two-thirds to three-quarters shifted west by more than 15 kilometers per decade over the last 30 years.

Fei’s work has also shown that in many forest systems, a forest’s health and productivity is tied to its biodiversity. So while trees shifting their ranges shows that they’re resilient to the challenges they face, there is also evidence that they’re diverging.

And since there’s strength in variety, as species move away from each other, they become more vulnerable to diseases and invasive pests.

“If you have a forest with a diverse set of tree species, the likelihood of an invasive pest destroying the forest is low. But when one or two types of trees make up a forest, something like the invasive emerald ash borer could wipe out that ecosystem,” Fei says.

Those losses are important on a number of levels. Certain animals depend on trees for shelter or food, and the loss of trees could set off a chain reaction of species loss. Human recreational activity is also a casualty of forest loss.

Forest loss also inhibits one of our key tools to address the climate change crisis. Increasing global forest cover would capture more heat-trapping carbon dioxide. That only works, however, if forests are healthy. Fei’s research, published in the Proceedings of the National Academy of Sciences, has already shown that trees killed each year by the 15 most invasive pests contain 5.53 teragrams of carbon (TgC), equivalent to about 6 million U.S. tons. That’s as much carbon as 5 million vehicles emit in a single year.

➞ Read more about the Ross Reserve project and see how the forest there has changed over the years.

“If we’re not careful, we can break the system,” Fei says. “But on the other hand, because the system is so big, if we act now, there is still time to fix the problem.”

Zooming out from McNickle’s work in a specific ecosystem and Fei’s research on American forests is Jingjing Liang. As co-founder of the Global Forest Biodiversity Initiative, he coordinates a team of 150 scientists from 96 countries who have created a global forest inventory that analyzes forests through a global lens. 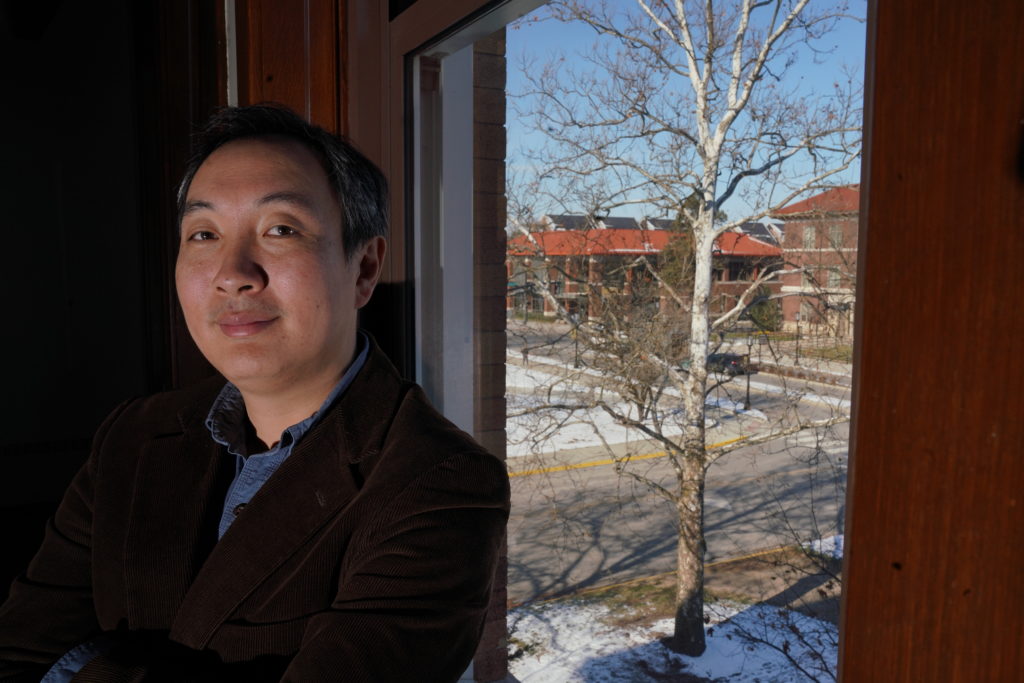 One of the initiative’s recent projects led to the first global map of tree symbioses from 55 million tree records in 1.2 million forest sample plots spanning 110 countries. The map showed the distribution of different types of mycorrhizae, symbiotic fungi that live beneath the soil and attach to tree roots. Trees provide carbon necessary for fungi survival, and the fungi act as root extensions, allowing trees to soak up more water and nutrients than they could on their own.

More specifically, arbuscular fungi grow inside the tissues of tree roots and are associated with tree species such as maple, ash and yellow poplar.

Ectomycorrhizal fungi live on the outside of roots and are associated with tree species such as pine, oak, hickory and beech. The map showed that climate is one of the most significant factors determining the distribution of mycorrhizal fungi and that over time, climate change has altered those distributions.

Liang’s research, published in Nature, suggests that approximately 60 percent of tree stems on earth are ectomycorrhizal, but a warming climate can reduce the abundance of ectomycorrhizal tree species by as much as 10 percent by 2070.

“In North America for example, what we see in the central Appalachian region is that there is a fundamental shift from oak-dominated forests to maple-dominated forests,” Liang says. “Those changes will have consequences for the environment.”

“A transition from oak to maple would fundamentally alter the fungi in the soil, tree species composition and biodiversity aboveground as well,” Liang says.

Species shifts also have local consequences, Liang says. White oaks are an essential component of the barrels used to age bourbons traditionally made in Kentucky and now all over the country. As forests shift away from oak species, white oaks will be more difficult to find or grow.

“It is not a simple change of species. It is going to affect related ecosystem functioning and services that relate to our daily lives,” Liang says. “If we do not take measures to conserve forest resources and mitigate climate change impacts, we may go beyond a tipping point when our ecosystem will start to crash and never be able to recover.”

Monitoring tree species at the local, national and global scale, both above- and belowground, reveals much about the condition of our forests and our changing climate — and how they interact. That research is essential to ensuring our silent workers, and the benefits they provide, endure.

Photo 1: Professor Songlin Fei’s research has tracked the movement of North American tree species in relation to climate change. His work has also shown that forest biodiversity is closely tied to its health and productivity.