A storm brews in unique student 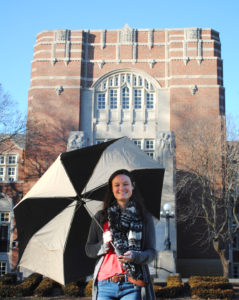 Photo by Rachel Flanders
Mary Rose Mangan loves all kinds of climate. The senior applied meteorology and climatology major from Delaware is quick to explain that there is a big difference between climate and weather.

In a forecasting class that takes about 10 hours of her time each week, she’s the only senior majoring in applied meteorology and climatology at Purdue. Although she’s one-of-a-kind in her class, her love of weather actually comes from a place anyone can appreciate. Mangan’s passion for weather is extreme because she loves how universal it is.

“Weather impacts everybody every day,” she said. “It can help you or hurt you a lot.”

The thing that stands out about being an applied meteorology and climatology major is the “applied” part. She could have pursued a related major, but those majors focused more on weather forecasting rather than on climate and agriculture, which is what makes her truly unique compared to the average college meteorology student.

“I’m really interested in climate, how people use the data, and the ground surface part of the atmosphere,” said Mangan.

Weather is the short-term conditions in the atmosphere, something you might see on a given day, according to the National Oceanic and Atmospheric Administration. Climate is the average weather over an extended period of time. It may rain in Phoenix today, but its climate still tells you that the place is a desert.

Looking at climate is important for people to consider in agriculture — from the crops to plant, to management choices, to planting and harvest timing.

Mangan found climate more intriguing, as she didn’t feel forecasting weather was for her.

With her major being so unique and Mangan being able to cater to her specific likes and dislikes, forecasting was too much day-to-day weather for Mangan’s preference.

Being the only one in her major has its advantages. In many ways, she can forge her own course of study. She takes some classes in earth, atmospheric, and planetary science, others in forecasting. She’s even taken several courses in agriculture because of the connection between meteorology, climate, and agriculture.

“It gives you more breadth of education,” said Mangan.

This unique path gave her more than just what your average weather forecaster could get in education. The subject fascinated Mangan, no matter what the climate.

“I like starting without understanding anything about why something happened and then being able to figure out why this is the case,” said Mangan.

In her atmospheric physics class that studies cloud formation and radiation, Mangan loved being able to make the connection between agriculture and weather when learning about ice nuclei. Debris in the atmosphere needs to be a certain shape so ice can form, and a type of soil that she learned about in a soil science class was one of the most important aspects.

“I never thought that there was a connection between clouds and the soil,” said Mangan.

Mangan’s singular journey also included a stent working for the Indiana State Climate Office. She began working there her freshman year. She was taking classes at Purdue and enjoying them, but she liked seeing how climate data is used in the real world.

The senior continued forging a unique course of study when she interned for the National Weather Service within climate services during the summer after her junior year. Meteorology went from being a topic she studied in school to something she loved doing, as she analyzed the many logical uses for climate and weather data.

Mangan was enthused about conducting a survey dealing with who uses climate services out of the 122 National Weather Service offices throughout the United States.

Most days, she was in front of a computer working, but being able to communicate with others about climate and weather that deal with it in their actual jobs was exciting for her. The best part of the survey Mangan worked on for her internship was talking to interesting people who were in the field. As she met these people, Mangan was interested in so many aspects of meteorology.

“Most things interest me, and I just don’t know what I want to do. Everything I see, I think would be great,” said Mangan.

Mangan didn’t realize she was applying skills learned in the classroom in her internship, yet she was each day. Throughout this opportunity, she learned that the opportunities she’ll have with a degree in meteorology span further than even jobs that deal strictly with science.

If agricultural meteorology in the United States wasn’t enough, Mangan even has a passion for meteorology abroad. She studied abroad for one semester at Wageningen University in the Netherlands during Spring of 2016.

“I would love to work in meteorology abroad someday,” said Mangan.