David Wilson once watched an Ethiopian farmer thresh his barley harvest using three oxen. Wilson was amazed at the hard work the farmer poured into working on his crop that hot August day.

“It was so eye-opening seeing this farmer and talking to him about the struggles he faces,” Wilson said. “Seeing the hard work of his tireless physical labor really hit home how big the problem is and how impactful a vehicle could be in helping farmers be more efficient.”

The problem, as Wilson sees it, is that farmers in developing countries lack the machinery and technology for agriculture. Not only is it labor-intensive for farmers, it is also time consuming and does not produce maximum harvests. It’s Wilson’s goal to address this challenge using his knowledge of machine systems engineering. 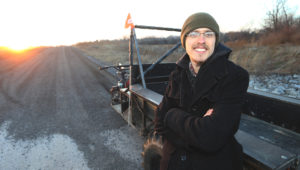 Photo by Tom Campbell, Purdue Agricultural Communication
David Wilson is developing a versatile vehicle that will help farmers in developing countries: AgRover. Wilson earned a bachelor’s degree in agricultural and biological engineering from Purdue in 2009.

Wilson earned a bachelor’s degree in agricultural and biological engineering from Purdue in 2009. Since then, he’s set out to help make farmers’ lives easier by co-founding Mobile Agricultural Power Solutions (MAPS) along with other Purdue students. The company provides utility vehicles made from parts that are readily available in developing countries.

“Based on requests from our partner in Cameroon, we decided to design something that could be manufactured in the country and produced only from parts we can find in those countries,” Wilson said. “The idea was for the vehicle to be locally manufactured and low-cost in order to create more sustainability and encourage local economies.”

Wilson said his business idea came directly from work he did as a Purdue student. While in school, he was involved in the Purdue Utility Project (PUP). Wilson was part of a student team that competed to develop a multipurpose, low-cost utility vehicle for farmers in Cameroon in west-central Africa.

Wilson credited his continued interest in vehicles to that PUP experience.

“PUP got me really interested in this kind of work that helps people and addresses a real problem,” Wilson said. “Now, through my work at Mobile Agricultural Power Solutions, I am able to make a difference for these farmers in Africa, and I find it really rewarding.”

His company’s AgRover is currently being developed and used in Nigeria and Kenya, but Wilson hopes to expand its reach.

The AgRover’s mission is ambitious. Not only does Wilson want it to make farming easier for many more agriculturalists, he hopes it will improve local economies, standards of living, and education opportunities, too.

For Wilson, the work is less about building the vehicle and more about the impact the vehicle has on the lives of people in developing countries.

“There is a lot of need in these countries and a lot of opportunity for impact,” said Wilson. “This work is not for everybody, and that is fine. But when you see men plowing with an ox or women carrying water on their heads, you see a lot of opportunity to change lives in some way.”

Wilson said he has seen the AgRover cut the labor needed to farm. This has also improved the lives of farmers and their families beyond their fields. Wilson believes that the AgRover is making agriculture more efficient, and at the same time, it is giving people the opportunity for more income, more education, and more health care.

“I care about giving to people. Not just the product, but I care about the conversations and the relationships formed through my work,” Wilson said.

One of those relationships is his labor force. Wilson said he is committed to using local labor and not just imposing a product from the outside. Wilson’s goal is to bring up the entire community. So, MAPS hired several Nigerian graduates of a technical school so they can gain work experience. They have formed the first team of technicians manufacturing the AgRover in the workshop in Nigeria.

Currently, the AgRover is being manufactured to carry water, move people, drive off road, and perform farm work like planting, cultivating, and threshing. The idea is that the AgRover will continue to offer multiple functions so it can be used year-round.

“By developing a product that can be used year-round and can be made from available parts, we are able to help meet the needs in a special way,” said Wilson.

While Wilson believes that the AgRover is meeting needs in a special way, it is evident that Wilson’s heart for helping people is, too. As Wilson’s company and career continue to grow, his passion for helping others will most certainly continue to grow and guide his business for years to come.