At the beginning of his senior year at Purdue, Kole Kamman’s phone rang. The call was from an unknown number, but he answered anyway, expecting a telemarketer. Instead, the caller offered him a job after graduation.

Although a surprise, the call came from a company he knew: John Deere, where he had just completed a summer internship. But even before that, Kamman grew up on a farm in Columbus, Indiana, where he had driven green tractors since he was 10 years old. Just getting the internship was like a dream come true.

“It was a very special summer for me,” said Kamman. “They gave me the opportunity and the responsibility to have a project that made an impact. It’s not like I went there and swept the floors and got coffee — that’s not even close to what I did.” 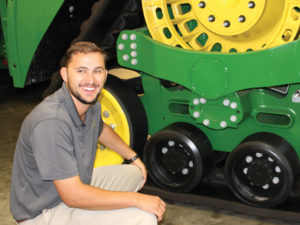 Photo provided by Kole Kamman
Kole Kamman is a technical instructor for John Deere. He says his favorite part of the job is the personal connection he makes with each technician he trains.

During the internship that helped him land a career, Kamman gathered market analysis information on a prototype John Deere product. He worked across the Southeast to North Carolina. He stopped at John Deere dealerships along the way to collect feedback from potential customers.

Kamman, who earned a bachelor’s degree in agronomics business and marketing from Purdue in 2015, said he still gets to make new friends almost every day. As a technical instructor for the John Deere Training Center in Morrisville, North Carolina, he trains technicians how to work on everything from lawn mowers, to combines, to cotton pickers.

He spends part of his time in a classroom where he teaches technicians about the basic parts of the equipment, like the engine, transmission, and hydraulic components. Outside the classroom, he helps technicians solve common problems they may face on the job. Although some trainings are only a couple of days long, Kamman spends time getting to know each technician.

“Before they leave, I know about their background, their family, their kids, and what they like to do on the weekends,” he said. “If you come down here for a two-day class, you and I are best friends for two days.”

When he was an intern, Kamman valued what he did because he was doing something worthwhile. He loves his job now for the same reason. He believes he’s an integral part of U.S. agriculture.

“I’m put in the position of teaching the guys who are fixing the equipment of the farmers who are feeding the United States,” he said.

While getting offered a dream job before graduation sounds like the easy life, Kamman had to work hard to get there. In fact, he didn’t even get in to Purdue on the first try. His high school test scores weren’t quite where they needed to be, but Kamman was set on going to Purdue.

“For me, going somewhere else wasn’t an option,” he said. “And luckily, I wasn’t put in the position where I had to find another option.”

So, Kamman participated in the Pathway to Purdue program, which allows students to co-enroll at Purdue and Ivy Tech Community College. He earned his associate degree from Ivy Tech in 2013 before he transitioned to a full-time Purdue student.

“If your heart’s set on Purdue, or on agriculture in general, don’t look at Pathway to Purdue as a secondhand program,” Kamman said. “It gave me the ability to be involved at Purdue just like I was a full-time student. It’s not just a stepping stone to Purdue. It’s a direct shot.”

While he was in the Pathway program, Kamman lived the life of a typical Purdue student. He lived in a Purdue residence hall, played intramural sports, and joined Purdue clubs and organizations.

Being involved with clubs was about more than just making friends. Kamman credits the Purdue Agronomy Club and Agronomy Ambassador program with landing him the John Deere internship that led to his full-time job.

When he was an Agronomy Ambassador, a man asked Kamman to explain what agronomy was at an alumni event. The man was impressed and gave Kamman his business card. He worked for John Deere and wanted to interview Kamman for the internship that would lead to his career.

Kamman’s involvement with student organizations at Purdue helped him realize his passion for agriculture. Without stepping outside of his comfort zone and taking on new challenges and leadership roles, he’s not sure where he would be today.

“When you get to Purdue, don’t just join a club — take on responsibility,” Kamman said. “Get involved. Become an officer. Become an ambassador. Getting involved is ultimately what gave me this opportunity.”