Joseph King became a food science major because he loves food. The junior from Jeffersonville, Indiana, is mixing that love with his newfound food science skills to cook up a winning recipe to benefit a student organization he also loves.

King helped conceptualize, create, and sell a popcorn snack as a fundraiser for Minorities in Agriculture, Natural Resources, and Related Sciences (MANRRS), a student organization that supports professional development for its members.

“MANRRS is great, because it’s a vehicle for student success and industry interaction limited only by how much motivation we have,” King said. 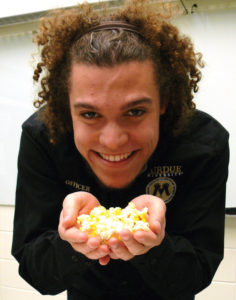 Photo by Taylor Rexing
Joseph King, a junior food science major from Jeffersonville, Indiana, holds some of the flavored popcorn he helped create. King’s team developed the snack to raise money for a student organization. They also sold the popcorn to raise money for a local food bank.

King is vice president of the Purdue MANRRS chapter and led a group that developed the snack. The group hopes the popcorn will be a way to raise funds not just this year, but in the future, too. MANRRS will use the money to help members attend national conferences and participate in other professional development opportunities.

“I’ve gained experience in planning and thinking through the product development process,” King said. “I’ve gained more confidence in my ability to create.”

King said that popcorn was the right snack for this project because, in a symbolic way, it resembles MANRRS’ goals.

“We chose popcorn because it’s a kind of blank canvas on which just about any flavor can be added,” King said. “When we were deciding on the flavors we knew we wanted to have something unique, but also something that would sell. The unique flavors are what make our popcorn different, and how we represent the diversity that exists within our organization.”

For King and his team, developing the flavors took some time. They brainstormed and collected data to come up with a variety of flavors. Ultimately, they came up with four flavors: maple pancake, garlic Parmesan, sea salt and vinegar, and barbecue. The effort was worth it.

“Tasting the popcorn is like previewing a movie, only better,” King said. “In this case, I can see, taste, and smell the product we dreamed up, so it’s very nice to see an idea come to life and to have had all the pieces fall into place for it to happen.”

Although King started the project, he said it was a team effort involving other MANRRS members.

“This has been amazing, because I never would have thought that we would have people volunteering this much time and help,” King said.

The goal was to unveil a small-scale batch of their popcorn snack in April — that would help fund future work. King said he has big aspirations for his team.

“It’s helped me to realize that we can achieve bigger goals,” King said. “Our broader goal is to have this reach out into local stores. It’s just exciting to see that we’re capable, and we can bring an idea to fruition. It’s opened up possibilities I didn’t necessarily know were feasible.”