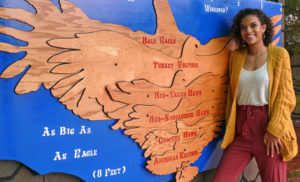 Photo by Natalie Korniak
Camille Vann is concerned about animals like elephants that are killed just for their ivory. That concern prompted the freshman animal sciences: pre-veterinary medicine to start a new student organization.

Few things animate Camille Vann quite like the topic of the illegal ivory trade. When she describes how poachers kill endangered African elephants just to sell their tusks, you can see the anger on her face.

“It’s pretty ridiculous and sad to know that there are so many elephants a day killed just for their tusks,” said the freshman animal sciences: pre-veterinary medicine major from Avon, Indiana.

It was her concern about elephants and other animals that motivated Vann to start a Purdue student organization that focuses on conserving and protecting endangered species. The organization’s goal is to give students an opportunity to work together to make a difference. Vann explained that the goal to preserve endangered species is about more than just protecting a few animals. Each living species plays an important part of Earth’s ecosystem.

“Protecting these species is important because animals have life,” Vann said. “What people don’t realize is the amount that they do for the environments that they live in.”

When she arrived at Purdue, Vann wasted no time reaching out to those responsible for clubs and organizations on campus.

“It is really exciting to see how many people are interested and want to join the club,” Vann said. “It is neat to have people be so passionate about it. Everyone is so willing to help me with everything that goes into making the club.”

Vann’s goal is to build an organization whose members have a chance to make a difference both locally and globally.

One local effort is to help preserve wildlife in Indiana and animals in zoos. Vann wants the club to visit places like the Columbian Park Zoo and Wolf Park. The zoo, just a few minutes from Purdue’s campus, is a smaller scale facility that showcases many endangered species and focuses on animal enlightenment. Wolf Park, located in Battle Ground about 10 miles north of campus, focuses on protecting wild dogs. Purdue also works closely with the park to complete research studies. Students in Vann’s proposed organization would study what kind of conservation tactics they are performing and how they are protecting various species.

Vann believes that the most enjoyable aspect of being part of a club is the activities that the members have the opportunity to participate in. She wants the students to go on industry visits, volunteer, and raise funds. However, Vann’s main focus is to educate the public about the things they can do to protect endangered species.

“I believe it is important for people to be able to see the animal themselves, how they interact with the zookeeper and the people in the crowd,” Vann said. “It has changed my perspective a lot. Being able to go behind the scenes if ever possible; learning about a certain animal and seeing how it is affected really makes a difference.”

Vann said she wants students to participate in hands-on experiences and have the opportunity to see the difference they are making. That’s why she believes volunteering for local shelters and conservation groups can make this happen.

“I want students involved to do a lot of volunteering at places in the community, like Wolf Park,” Vann said. “Being able to help by putting any time towards wildlife conservation can have a big impact because even the smallest efforts can make a difference.”

Vann said that raising money for conservation efforts will be an important way for the new organization to make an impact. The plan in to sell items and donate the proceeds to a conservation group like the World Wildlife Foundation. Along the way she hopes to educate other students about the value of protecting these endangered species.

“Part of the problem is that people aren’t even aware that some of these species are endangered,” Vann said. “People just need to know about it.”

The club is set to be established and functioning in time for the fall semester.

“Our goal is to make as big of a difference as possible hoping we can affect wildlife conservation in any way,” Vann said. “Being able to donate to the world organization would be great, but being able to change the outlook of the people in Lafayette and Purdue’s community is the main goal; to make people passionate.”