Ashlyn Burns is developing a business likely to make most people’s skin crawl.

Her business, named Bugbite, produces a product that closely resembles the wheat flour you’ll find in any typical pantry; the catch is her flour is made from mealworms, the brown insect larvae usually found stocked as pet food. Burns came up with the idea for Bugbite after sampling mealworm cupcakes from one of her professors. 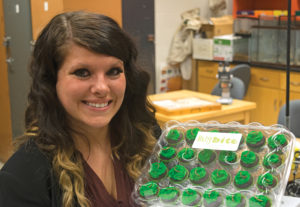 Photo by Kevin Miller
Ashlyn Burns showcases cupcakes made with her special ingredient: mealworm flour. The senior entomology major from Indianapolis said that flour made from mealworms could be one way to fight hunger with very limited inputs.

“At first, I was skeptical,” said Burns, a senior entomology major from Indianapolis.

But since that first bite, a business idea to manufacture mealworm flour exclusively for human consumption wriggled into Burns’ imagination. She realized this humble resource could ease hunger and provide another option for those with food allergies. Mealworm flour is an easy, inexpensive protein for areas where fresh meat isn’t widely available. It can even be mixed with wheat flour to prolong its use or for lower protein content. The two kinds of flour taste very similar, Burns said.

“I started researching all the benefits of eating insects, and I was surprised at the lack of commercialization of insects in the United States,” Burns said. “That’s when I started working on plans for Bugbite.”

Although a lot of Americans might be squeamish about eating insect larvae, Burns said mealworms contain as much protein by weight as beef cattle, and they are much easier to raise: you don’t need grazing lands, just some drawers and a beetle colony. Plus, mealworms have a much smaller environmental footprint — you can compost their waste, which Burns is marketing as another Bugbite product.

Although mealworms are nutritious, nobody is going to order a mealworm steak, but that isn’t Burns’ point.

“Fighting hunger is not about producing food that is aesthetically pleasing or gourmet quality,” she said. “It’s about producing nutritious foods that meet the essential needs of the human body while doing it in a way that is natural and betters the environment.”

Traditional farming requires large amounts of land for grazing or feeding animals, plus a lot of other limited resources, like corn to feed the animals, water, and other expensive inputs. By comparison, Burns said that insects require very little and can be mass produced using a fraction of the water used in traditional farming, and without using other costly and even controversial inputs.

“Mealworms are prolific breeders,” Burns said. “One adult female can lay a few hundred eggs. When I first started my colony, I had a small three-drawered container, and once they started breeding I had to run out to the store and buy two more.”

Eating a meal made of bugs may seem like a novelty to those who have easy access to food, but people fighting for every meal are likely to have a different perspective, Burns stressed.

“If you had nothing else to eat, don’t you think you would at least be willing to give it a try?” Burns said. “Wouldn’t you rather eat a meal containing bugs than starve to death?”

Burns said she hopes her business might be successful enough to make a visible impact on hunger. Many companies donate food to help the less fortunate, but Burns said she has a much bigger picture in mind.

“I want to make a difference that is apparent and real,” she said. “I want to be able to send Bugbite representatives out to areas where they can teach people how to care for their own insect colonies.”

Doing that, she said, would provide a sustainable protein supply and economic opportunity.

Every venture faces its share of obstacles and roadblocks. The concept of eating insects is probably a big one, but Burns is undaunted.

“Obviously, there will be people who resist this idea, but there are also people who can’t wait to try it,” she said. “The people who will want to buy my product are individuals who are health-conscious, seeking a new experience, or interested in supporting an important cause.”