Golfer sees more than just a playing surface on the course

“Golf teaches you how to relax in those moments when everything is stressful and you feel like it’s going to be the end of the world, and you’re nervous,” said Marta Martin, a senior turf science major from Madrid, Spain. “I think that it teaches you how to be calm and relaxed and say, ‘OK, I put in the work. I trust myself, so I can do this.’” 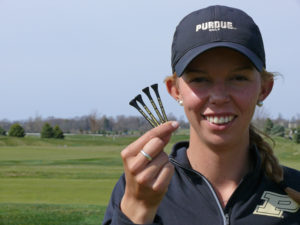 Photo by Caitlin Yoder
Marta Martin, a senior turf science major from Madrid, Spain, believes that four is her lucky number. During every golf competition she has four golf tees in her pocket to bring her good luck.

But golf provided Martin with more than a life lesson: it earned her a scholarship to play and study at Purdue. Martin said golf has always been a big part of her life. When she was 8, she decided to give up other sports so she could focus more on golf. Martin said that golf has affected her life in many ways and taught her valuable lessons. Through golf, she said, she learned the value of hard work and patience.

“Golf became more of a focus when I started to see that it provided me with opportunities in life like coming to the U.S. to study,” Martin said. “It opens up career opportunities and opportunities to travel around the world. It’s awesome.”

She has travelled around the world to compete against some of the best golfers. Tough competition can be stressful, but Martin said she is able to remain calm knowing that she has practiced as much as she could.

Golf also played a big role in her career choice. Since she was already on the turf as a competitive golfer, she decided to major in turf science. She said she is interested in many different things, but when she realized she could make a career centered around golf, the choice was easy.

She is already making connections as a competitor that will be valuable to her future career. Martin loves that her major is well-rounded and she gets to learn about many different subjects, not just topics directly related to her major.

“What I like about the turf major and business is that there is not always a right answer,” Martin said. “There are so many factors and there are many right or wrong answers. I really like the way it makes you think and makes you see how there are many ways to get to a point.”

Martin is keeping an open mind about graduation, but hopes to continue playing golf and go pro for a couple years.

“I want to see how it goes; if I like the way of living, if I enjoy competition as profession, and if I can make money from it,” Martin said. “I have a lot of things in mind but my number one thing is that I want to turn pro and see how that goes. After that we’ll see!”