Gabrielle Reese does not go to classes every day. On some days, the sophomore agricultural education major from Lebanon, Indiana, finds herself at the Indiana Statehouse attending a committee hearing to learn about new bills that could affect Purdue University.

“Every day is different,” Reese said. “Some days I just have emails or projects to work on from the office, and other days there are committee hearings or either the House or Senate is meeting to hear bills.”

Reese is Purdue’s government relations intern. Her role is to engage with government officials, elected officials and staff, lobbyists, and other stakeholders to explain to them how various proposals will benefit the Purdue community and the state.

“It is common for my boss to give me lots of tasks to complete,” Reese said. “One . . . was creating a one-page document that detailed why we needed funding for a certain building on Purdue’s campus. I had to research the information regarding how much it would cost, where the funds would be used, and when the project would be completed.” 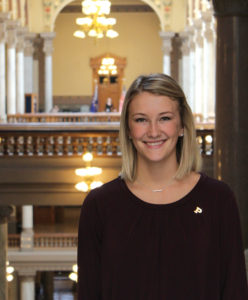 Photo provided by Gabrielle Reese
Gabrielle Reese, a sophomore agricultural education major from Lebanon, Indiana, has a love for history, government, and politics, which she drew upon as Purdue’s government relations intern in Indianapolis.

Reese is the first student to have this internship. She said her role is to advocate for Purdue as a whole with a specific emphasis on Purdue Agriculture.

The internship is a good fit for Reese, because she said she has loved government and politics for a long time. That love began with a trip to Washington, D.C., when she was in fourth grade and grew when she returned in seventh grade for a rally.

“I really started to understand how politics works and started to develop my own personal views,” she said.

Reese said her Washington experiences taught her more than anything she could have learned in a classroom or from a textbook. The experiences also inspired her to learn more about government and pursue the Purdue internship. Her view on politics also evolved — she became more interested in the legislative process than the different sides in political debates.

Reese’s internship showed her firsthand how Indiana government works. She said she had the opportunity to help guide bills that will affect Purdue now and in the future. She also worked with university administrators, including the Purdue president.

The internship has taught her a lot.

“I have learned . . . the overall process of the legislative session,” she said. “I vaguely knew and understood how the process worked, but to be down here in the middle of it is so eye-opening and educational.”