Kernels of Knowledge: The A-Maizing Growth of Corn in Indiana

Agriculture is a vital component of Indiana’s history, culture and future. Discover the development of corn and Purdue University’s contributions to its growth with Purdue Agriculture’s short series, Kernels of Knowledge. 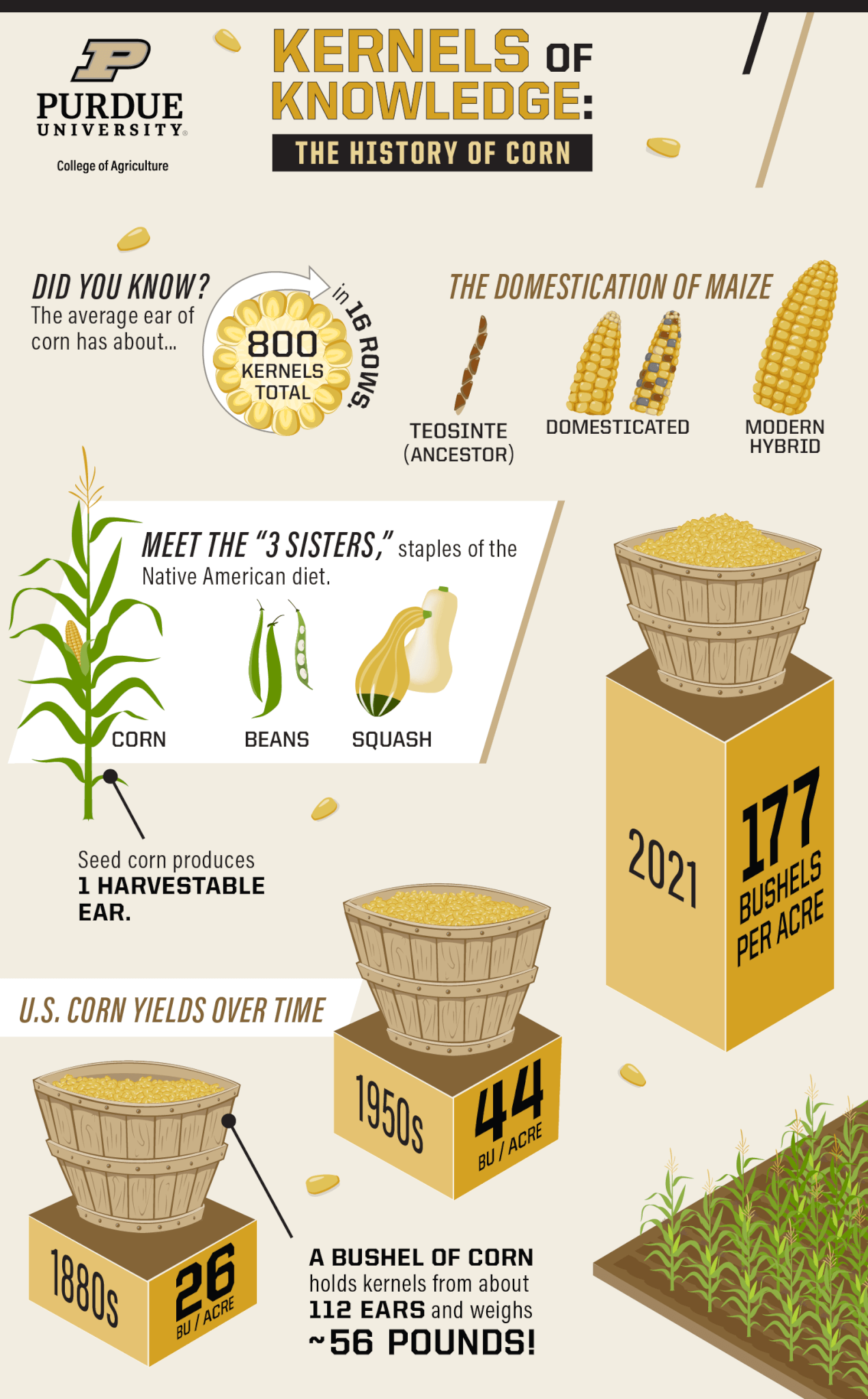 When Purdue University was founded in 1869, the average field corn yield in Indiana was 26 bushels per acre. Just over 150 years later, Indiana set the state record yield average at 195 bushels per acre in 2021 — more than the national average!

“Corn is a predominant crop in Indiana due to the climate, landscape and productive soils. Corn can yield a much higher amount of grain per acre of land compared to most other U.S. crops and can be used for a large number of different products,” explained Dan Quinn, assistant professor of agronomy and Purdue Extension corn specialist.

Corn, often referred to as maize, was a staple of the Native American diet and a ceremonial item. It was one of the “three sisters”: corn, beans and squash. Corn stalks provided the trellis for intertwined beans, which added nitrogen to the soil. Squash spread along the ground, acting as living mulch.

From the mid-1800s until the late-1930s, farmers usually saved seed after harvest each fall, planted open-pollinated varieties, and pollinated their corn with the same variety to produce a crop of the same type — or let insects, birds or wind pollinate their plants. High-quality seed was difficult to produce since both of these processes are difficult to control. The introduction and adoption of hybrids deliberately crossed for desirable traits improved stress tolerance and yield potential.

During the mid-1950s, continued improvements in corn hybrids, combined with rapid adoption of mechanization, synthetic fertilizer, and greater attention to farm and soil management practices resulted in higher yields. Today, farmers continue to increase corn yields every year using transgenic hybrids, where genetic material is introduced into corn plants using molecular technologies. They plant seed with traits such as resistance to insect pests and weed-killing herbicides, while adopting environmentally sustainable practices such as reduced or no tillage.

Indiana consistently ranks in the top 5 states for U.S. corn production, in part because technologies and practices developed by researchers at land-grant universities like Purdue helped fuel the increase in yield. Land-grant universities, established with a series of Congressional acts, are charged with education, research and outreach (called extension) to their local population.

Purdue Extension is crucial to the development of corn in Indiana, as Extension educators (or “agents,” as they were called then) share research that helps farmers maximize crop production, and then relay their needs to Purdue researchers. Researchers, in turn, share crop management practices for farmers to test and implement, and the cycle begins again.

Stay tuned for next week’s knowledge on types of corn!

Kernels of Knowledge: Harvesting for Food, Feed, Fiber and Fuel

Maybe the first thing that comes to mind when you think of corn is corn on the cob or hot, buttery movie popcorn. What you might not think of is minty toothpaste — but corn is found in many products we use every day. Read on to find out where Indiana-grown corn ends up.

Kernels of Knowledge: Corn, a family full of variety

If you’re driving in Indiana, one thing is certain in three out of four seasons: you’re going to see a lot of corn! That’s no real surprise, since Indiana ranks second in the U.S. for popcorn production and fifth for field corn production. But, as you’re looking at them, have you ever wondered why some fields of corn are taller than others? Or why people or machines remove corn tassels from some plants but not others?

Kernels of Knowledge: The A-Maizing Growth of Corn in Indiana

When Purdue University was founded in 1869, the average field corn yield in Indiana was 26 bushels per acre. Just over 150 years later, Indiana set the state record yield average at 195 bushels per acre in 2021 — more than the national average!