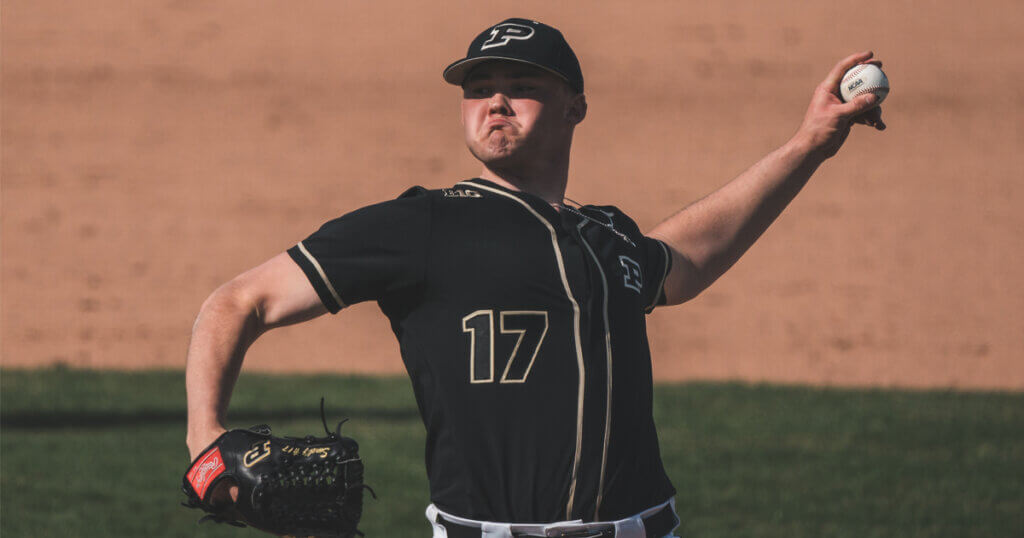 Jackson Smeltz was gathering up his gear last March with the rest of the Purdue men’s baseball team when the coaches walked into the locker room with the news that would change the season forever. The rest of the season was cancelled due to the worsening COVID-19 outbreak that became a worldwide pandemic.

“I just had my first college start,” the junior pitcher said. “I didn’t think [the pandemic] was going to be the outcome.”

The pandemic cut the season short all over the country, but for Smeltz, it was another bump on the long, twisting road of his college baseball career. Smeltz, an agribusiness management major from Lafayette, Indiana, has faced injuries and many setbacks that have kept him off the field. But despite the setbacks, his love for the game keeps him coming back to the field every time.

Smeltz was facing his own challenges during the season before it got cancelled. In February 2020, the pitcher suffered an injury to his right hip. The injury affected his game play by not allowing him to practice the same as his teammates. Not being able to lift weights the same or run without limping did not sit well with him.

“Not being able to do anything the same . . . you feel stuck in the same place,” Smeltz said. “You’re not able to improve.”

The first start on the mound that Smeltz had early in the canceled 2020 season was the first time, he had pitched a game in years.

“The only time I pitched in high school was my freshman year.” 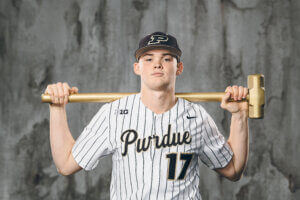 Photos provided by Purdue Sports Information
Jackson Smeltz is no stranger to injury. But the pitcher had just had his first start for Purdue when the pandemic sidelined everyone.

During his freshman year of high school, Smeltz developed an arm injury that prevented him from playing, and eventually required Tommy John surgery. That reconstructive surgery repairs a ligament inside the elbow and requires a lengthy recovery.

After several years of rehabilitation, Smeltz continued with his plan to play baseball at the college level. Smeltz was offered a scholarship and a spot on the 35-man roster to play for Purdue University.

“I was a medical redshirt my freshman year at Purdue,” he said.

That’s because he was still dealing with the repercussions of his Tommy John surgery. But injuries did not stop him. After many more surgeries and other injuries, Smeltz continued to persevere through adversity.

That perseverance is nothing new. When he was 13, Smeltz was diagnosed with a noncancerous brain tumor. This impeded on his baseball season and forced him to take a year off of school and baseball in order to get it removed. Regardless, Smeltz persevered. He was able to recover and began playing baseball again and pitching.

“I just love to play the game,” he said. “I feel like God gave me these talents for a reason, and just because you are going through a tough time or you hit roadblocks along the way, that doesn’t mean you should quit. It means you should keep on going no matter what. My mentality is that I am going to keep on going until someone tells me I can’t play anymore and there’s not an opportunity left.”

The challenges that he has faced developed a harder work ethic, Smeltz said. This is what has allowed him to keep playing.

“For some reason, I am still here,” he said. “There are a lot of people that would’ve quit by now. I’ve missed multiple years of sports due to injuries and things and a period of time that I hadn’t pitched in a real game in about five years. There’s no reasonable explanation that I am still able to do this I still have the opportunity to do this. There is a bigger reason as to why I am here.”

When the remaining 2020 season was canceled, it put him in a tricky situation. Smeltz’s injury hampered his recovery time. During the early months of the pandemic while the state was shut down, hospitals were not preforming non-emergency surgeries, so he was not able to get into surgery until later in the summer. That pushed back his six- to seven- month rehabilitation. The silver lining was that he didn’t miss any games. Even with the most recent setbacks, Smeltz isn’t about to give up.

“If you give up, there may be a time later in life that you may regret that but if you see it through and keep on going no matter what, you’ll ultimately have no regrets,” Smeltz said. “When you’re going through things like injuries, you learn a lot about yourself. You learn how to deal with setbacks and push through adversity. That not only helps you in baseball, but in life.”

Smeltz hasn’t allowed his injuries to define who he is. He continues to work hard and have patience.

“I want to take baseball as far as I can go,” he said. “But the biggest thing was proving to myself despite what anyone says because of injuries stacked on top of each other — I want to prove I could do it. And I went a lot further than a lot of other people would’ve gone.”