Plants are patients for this aspiring doctor

“Oh, I have always been a little nerd,” said LeAnn Lux. “I grew up playing with beakers and test tubes, and I would be upstairs and would mix anything I could with water and I would show my family my potion to show them how scientific it was.”

Lux still enjoys working with beakers and test tubes. Today, the senior plant science major from Shelbyville, Indiana, studies different diseases and how they affect plants in the Field Crop Pathology lab. One of her projects involves isolating a single pathogen to infect a corn or soybean plant, and observing its effects on the plant. 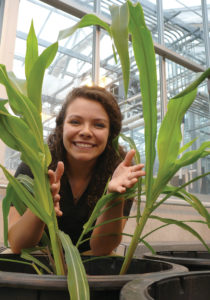 Photos by Leah Jones
LeAnn Lux has spent a lot of time working in Purdue’s many greenhouses. She even conducted her own experiment in the greenhouse to examine the effects that pathogens have on soybean plants.

“I value the trial and error of projects and the puzzle of trying to figure out how to get a solution if the project didn’t work,” Lux said. “Never knowing what to expect keeps me on my toes.”

Lux has spent much of her college career working in the lab, but she always knew she wanted something more. So, she combined her lab and greenhouse research with work in the field.

She had a chance to get her hands dirty last summer when she interned for a field agronomist at Pioneer. The experience showed her the real-world implications of her lab research. She realized just how much she was accomplishing for farmers in the lab, greenhouse, and field.

“I had only ever seen the disease growing on a plate in the lab and thought the diseases were only growing because we were making them grow,” she said. “So, seeing them out in the real world and not in a controlled environment was really cool.”

The internship was perfect because Lux aspires to become a field agronomist — a person farmers call to diagnose problems in their fields. A correct diagnosis relies on many factors, and Lux loves the challenge. But she also admires the relationships these professionals build.

“I like the idea of being a field agronomist, because I get to have interactions with farmers, continuously learn, and am able to educate the people around me,” Lux said.

Lux always had an interest in the science of farming. She grew up on her family’s grain farm, and she knew she wanted to study agriculture, but she also found a passion for agriculture during her time at Purdue.

These days, you can find Lux working on her own research project in the greenhouse. She’s studying soybean plants and hopes her work will make an impact on the agriculture industry in years to come.

And it all started with mixing potions as a kid.

“I wanted to do this when I was little and now I actually get to,” she said.

The grass is always greener in new work

LeAnn Lux is taking being a “plant doctor” very seriously these days.

The senior plant science major from Shelbyville, Indiana, got her start working with row crops like corn and soybeans, but she has expanded to include other crop plants. Lux currently works in the Turf Science lab, where she is assisting in a study that examines which fungicides work best on different pathogens.

The science is the same for turf and row crops, Lux said, but working with turf is just one more way she can fulfil her dream of becoming a “plant doctor,” which can include all plants instead of just agricultural production crops.