I don’t spend a lot of time pondering what might cause the end of our world as we know it, be it an asteroid colliding with and knocking Earth out of orbit; a rogue black hole appearing out of nowhere, sucking our world into its inescapable and unforgiving clutches; a massive volcanic eruption filling the atmosphere with dust and debris, blocking the sun from warming the Earth and stopping all vegetative photosynthesis; a worldwide disease pandemic for which no cure can be found; or something man-made, such as a sudden nuclear war with massive radiation covering the planet, or pollution-caused climate changes that slowly but irreversibly destabilizes Earth’s global ecosystems.

Whatever the cause, the end result is the same for human existence. Not a pleasant thought, and that’s why I don’t like to dwell on it.

What is more interesting to me is to think about what might be left and about what non-human life forms doomsday theorists predict will be the last to perish. General consensus is that humans are comparatively quite fragile and that cockroaches are most favored to be the last man standing in an apocalyptic world.

Now that gets me thinking. When it comes to insects, it is worth taking some time to ponder the “why.” Why is it that cockroaches are predicted to inherit the earth? I am sure that you have spent considerable time wondering the same thing. What is it about cockroaches that makes them so evolutionarily hardy?

Let me first mention that not all cockroaches are the same. We tend to lump them all together as pests when, in fact, there more than 4,800 species of roaches in the world – nearly as many as all mammal species combined. Yet when humans speak of cockroaches, they usually consider only a small handful; those abhorrent hospitals pests that have adapted to live with human societies. They are called peridomestic, meaning that they live in and around human habitations.

Topping of the list of pestiferous, peridomestic cockroaches in North America are these four species: the American, Oriental, Brown-banded and German cockroaches. 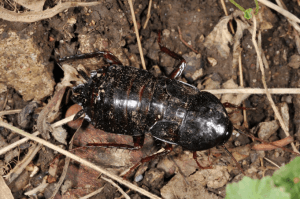 You will notice right off that the majority of these are named after countries or geographical areas. That’s unfortunate, because cockroaches have a reputation of being filthy, dirty, disease-spreading vermin that we would be better off without. Not so with countries. We really need a more inclusive, accepting and welcoming world where every group of people is valued and assisted. Naming repulsive pests after countries does not further that cause.

I also point out that just because a name is given to an organism does not always depict its true origin. For example, although the American cockroach is a major pest in the United States, evidence suggests that it arrived in the Americas by way of hitch-hiking on ships from tropical Africa. The exact origin of the Oriental cockroach is debatable but thought NOT to be from the Orient at all but rather from southern Russia. Likewise, the German cockroach, which was previously believed to be a native of Europe, is now considered to have originated in Southeast Asia.

When country names are arbitrarily assigned to pests, it becomes easy to infer that these countries are responsible for nefariously planting or introducing them as part of a secret plot to destroy our lives. Nothing could be further from the truth.

What is true is that cockroaches, especially peridomestic ones, have always moved via international trade to invade homes, hospitals and restaurants throughout the world. Because they feed on decaying garbage, refuse and trash, they can passively transport disease-causing pathogens wherever they travel. They contaminate our food supplies and our living spaces. In addition, cockroaches are linked with human allergies. An alarming percentage of asthma patients show sensitivity to cockroach allergens. This means that allergic responses can be triggered by cockroach dander and also that cockroaches, even if not always visible, infest many more buildings than we realize.

As a group, cockroaches have broadly oval but flattened bodies that allow them to squeeze into tight nooks and crannies. Their heads are characteristically tucked under their thorax as if always looking down at their feet. They have large eyes and long, flexible antennae to sense their environment because most are active in dark places or times.

The two larger species (American and Oriental) are 1-2 inches long, are dark or reddish brown and shiny in appearance. Both can live out-of-doors but scavenge for water and scraps of food found in trash and human waste, typically in basements, crawlspaces, sewers or other man-made underground cavities areas where it is dark and humid.

Adult German and brown-banded cockroaches grow to only 0.5 inches in length and are overall light-brown in color. German roaches are marked with two dark stripes running lengthwise to the body, suggestive of stripes on a soldier’s pants. Brown-banded roaches get their name from two distinctive, darker bands running across their wings and abdomen, like a belt. Both German and brown-banded cockroaches live exclusively with humans; they do not live out-of-doors, are active at night and elicit panicked screams and minor, but embarrassing, mishaps of incontinence when they scatter in short bursts due a middle of the night flip of a light switch. Both are easily and unknowingly moved by people between homes, apartments, hospitals, grocery stores, and kitchens and via, produce, packaging and furniture.

When cockroaches do invade – and they will always be with us because that is what they do best – step back, take a deep breath and realize that their presence is not the end of the world. They can be largely managed by eliminating their food, water, and habitat. Knowing the facts about where peridomestic cockroaches live and reproduce will help when it comes to controlling them. Targeting both indoor and outdoor areas is prudent for American and Oriental roaches. On the other hand, when infestations of German or brown-banded roaches occur, de-cluttering and sanitation should be the backbone of control efforts.

Sticky traps can be used to monitor or reduce population size. Exclusion practices, such as sealing cracks and crevices and maintaining the structural integrity of buildings, will reduce infestations.

In recent years, new roach control strategies and even new classes and formulations of insecticides have become available. Chief among these are improved baits and baiting technologies that, when used in combination with the above measures, can eliminate rather than just reduce roach infestations in many buildings.

All four of the peridomestic cockroaches mentioned above are notoriously hard to kill, secretive, nocturnal, smelly and flat out ugly. These characteristics and habits are what make them disgusting to most non-entomologists. But they are especially adaptable insects and that is what gives roaches the edge in the struggle to survive and the probability of inheriting the earth. Cockroaches are an ancient group, dating back at least 320 million years. If past performance is an indicator of future survival, they will be around for a long time.

I have concluded that six adaptations make them especially likely to survive.

Whatever the cause, I imagine the end of the world to be an unsightly mess, and if the only thing left to inherit it is cockroaches – well, they are welcome to it.

I reckon that we should concentrate our energies on preserving our world, not just surviving it; spend less time categorizing and blaming others and, instead, spend more time appreciating that we are all inhabitants of planet Earth and that we all have positive contributions to make.

If we all work together now to preserve Mother Earth, we might avoid having to worry about cockroaches taking over in the future.