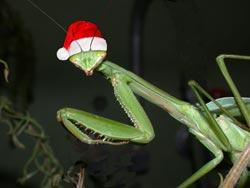 Guess who is coming indoors for the holidays?

I don’t often get questions about new insect outbreaks in the home at this time of year, but when I do it is often near the Christmas holidays and the letter exchange goes something like this ….

Shortly after Christmas my living room was invaded by hundreds of tiny bugs. They were crawling everywhere …. on walls, on the floor, on the ceiling, in the windows, and even on our Christmas tree. They nearly spoiled my whole holiday season and I still get the ‘willies’ just thinking about them. What bugs come out in the middle of winter? Aren’t they supposed to be hibernating?

I am tempted say these might be the notorious “Bah Humbugs,” that come out every Christmas season — but I suspect you are clearly not in the right state of mind to appreciate the humor.

The feel of a warm fire crackling in the fireplace and the sight of a fully decorated Christmas tree complete with lights and tinsel can really make for Christmas memories. There also is something about the smell of firewood burning together with the nostalgic scent of pine from a freshly cut Christmas tree to induce those memories. Unfortunately, these may be the very things that caused your unpleasant episode with bugs.

Either your firewood or your fresh Christmas tree are the source of the bugs crawling around your home. I’ll explain the connection between bugs, firewood, and Christmas trees, but first let me answer your question about hibernation.

The term hibernation generally refers to a period when an animal reduces its metabolism and suspends all but it’s very essential life-sustaining activities as a way to pass the winter. In mammals, we think of bears or groundhogs that sleep through the cold winter in a semi-dormant state.

Insects also suspend their usual activities and enter a dormant state to pass the cold winter months, but they do not hibernate like mammals do. Insects are ectothermic, which means that their body temperatures reflect the temperatures of their surroundings. They do not have the ability to self-regulate in the same way that mammals can. Like mammals, insects can lower their metabolism way down, but they do not burn fat reserves. Instead, they produce a substance called glycerin in their blood supply that prevents freezing.

Glycerin is very similar to ethylene glycol or antifreeze that you put in your car. Glycerin, in insect blood, does not change the ambient temperature but, like antifreeze, it gives the insect body a “super cooling” ability that allows its body fluids to drop below freezing without permitting ice crystallization. Ice crystals can rupture cells and tissues and injure organs. In other words, by lowering the freezing point, insects become cold-tolerant.

Insects also use other strategies to survive winter extremes. Chief among these is “diapause,” a biological mechanism used to endure predictable, unfavorable environmental conditions. Diapause is a physiologically induced delay in development or a dormancy that is most often observed in arthropods and especially insects. Diapause often occurs in either the pupal or egg stage, but may also occur in the more active stages such as adults or even larval stages such as when wooly bear caterpillars curl up in leaf litter, stop growing, eating, or even moving for extended periods.

To pass the winter, many insects use both strategies. They go into diapause or a suspended growth and development period and chemically change their internal body fluids such that they cannot freeze even though temperatures are below freezing. We call this behavior overwintering rather than hibernation.

Even before the insects begin diapause or produce glycerin, however, many of them seek out a semi-protected area in which to overwinter. Favorite among these are under loose bark or attached to tree limbs and branches. An old log that laying in the forest provides ideal shelter for beetles, flies, centipedes, and millipedes. They burrow into or squeeze up under the bark in protected nooks and crannies where they are safe from predators and moisture.

The onset of colder fall temperatures trigger insects to seek protected places as well as diapause. Conversely, warmer spring temperatures signal the insects to awake from their dormancy. Eggs begin to develop and hatch, adults emerge from pupae and larvae begin growing again. Although it may take some time, the bugs eventually return to do . . . what bugs do.

Here is the kicker: It takes some time. This process does not just happen overnight. One warm day will not be enough — it only begins the clock. But if temperatures remain warm for several days, these somehow accumulate within the insect until a specific threshold is reached (unique for each species).

An insect’s overwintering survival strategy is fascinating, but not always foolproof. It works exceptionally well out-of-doors, in nature, but if we accidentally bring insects into the house where temperatures are warm, their little bodies are tricked into believing that springtime is almost here.

A praying mantis is a typical scenario — and incidentally this is a true story. One year I found several praying mantis egg cases attached to weeds and tree limbs during the late fall and early winter, and then then did what any other red-blooded, insect-loving, entomologist would do. I collected them, put them in a cereal bowl and stashed them in the back of my wife’s cupboard thinking that they would be tucked away out of her sight and that I would take care of them before she ever noticed. Well, as you probably guessed, I forgot about them.

Once inside the warm house, the eggs reached the proper temperature threshold that restarted their development clock. They broke diapause and after the required number of warm days, bingo, the eggs began to hatch.

Unfortunately, their timing could not have been worse — for them and for me. The tiny mantids began to emerge by the hundreds from the cupboard. One mantid egg case contains several hundred eggs, and being the expert entomologist that I was, I had collected several egg cases.

The bottom line is that thousands of hungry, baby mantids began pouring out of the cupboard all at once. Like in your case, they began crawling all over the walls, ceilings, countertops, dishes, and even down into the utensil drawer. They were everywhere.

It just so happened that I was away on a business trip at the time. I received a very curt telephone call from my irate wife that began with “WHAT THE ___ blank___?” followed by her announcing my immediate physical ban from the kitchen and from touching any of her dishes for the rest of my life. She hung up on me when I tried to answer her next question about why I could not just have become a librarian or an engineer.

Suffice it to say that my wife does not share my sense of wonder and awe about insects and their overwintering strategies. In fact, as I remember, she terminated our discussion even before I got to explain the difference between hibernation and overwintering.

I hear similar stories nearly every year from unsuspecting people who bring a freshly cut Christmas tree into their home — unaware that a mantid egg case, or a mass of pine aphid eggs, are attached to a branch or a needle. Several days after the tree has been decorated and trimmed, eggs hatch, tiny bugs appear by the hundreds, and begin crawling everywhere. Then along comes a letter, similar to yours, asking why insects are emerging in the middle of winter?

I suspect you brought hitchhiking insects into your home on a Christmas tree, but firewood is also a common vehicle. Many wood boring beetles, spiders, lady beetles and even millipedes and centipedes are attracted to dead logs and stumps where they find protected places, in cracks or under bark, to hole-up for the winter. They go dormant in the firewood piled outside but reawaken in warm cozy homes stacked next to the hearth. I imagine that they are just as surprised to find themselves indoors as is the homeowner and when they see the calendar they probably say to themselves, “shouldn’t I be overwintering?”

Unfortunately for them, springtime has not yet arrived, no flowers blooming no leaves breaking bud, no other insects out yet, so there is nothing for them to feed on. Eventually they will die … and all because they were brought inside, out in the cold.

So, what can you do to prevent such surprises? Two things come to mind right off.

1) When you purchase your next Christmas tree and the attendant there asks if you would like it shaken — just say yes. The vibration not only shakes off dead needles and other debris, it might also shake off insect egg masses or other overwintering insects.

2) When it comes to firewood, store it outside in the cold until just before you intend to burn it. That way the insects don’t have time to come to life and crawl all over your home.

And of course, to my bug-loving friends — those who may, for some strange reason, intentionally bring diapausing insects into the home — never store them in your wife’s kitchen cupboards.

Here is wishing you the best holiday ever.