After my children progressed from the stage where they argued with friends about whose dad was biggest or whose dad could beat up whose dad, they moved on to more civil comparisons. It was always interesting for me to hear them try to explain what their dad does. “My dad is a bug doctor. That’s not a real doctor, you know, but just a bug doctor of bugs. He doesn’t actually help anyone like a real doctor – but just sort of looks at bugs.” Then they moved on to something they could actually be proud of, like their mother’s cooking.

Those conversations left me wondering for many years if there was something I could use my entomology training for that would really help people … you know, like a real doctor, and thereby impress my children.

After many years of trying, I finally had that opportunity.

An elderly friend and neighbor had fallen while shopping at a store and hurt herself but was insistent that it was a rare occurrence (even though this had happened several times.) Being fiercely independent, she was adamant that she was NOT going to use a walker. That would make her look old (as if falling in the middle of a store did not make her look old) and she saw no real use in them anyway.

Four medical doctors, who she saw during her trip to the ER, recommended a walker but had failed to persuade her. The problem, as I saw it, was that they were just “people doctors” and what was needed here was a “real bug doctor” to weigh in.

It all came to me at once. I analyzed the situation and asked my neighbor friend if she had ever, in her many years of living, seen an insect trip and fall on its face. She gave me that strange, somewhat dazed look that entomologists seem to attract and admitted, “Well, no, I guess not, now that I think about it. I have never seen and insect trip and fall. But why do you ask?”

That what I was looking for. She was actually asking for medical advice from me, a bug doctor. Here was my chance to really matter, to redeem myself after all these years of not being a “real doctor.” 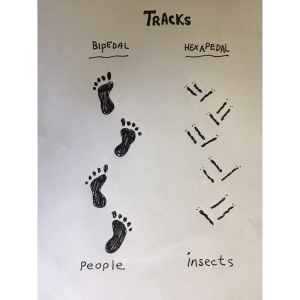 Using my best, slightly condescending bedside manner, I put my hand on her shoulder and looked her square in the eye. “Well, let me explain so that you will understand.” (I wished that I had a chart or a model of an insect’s anatomy across the room, but I just had to go with words this time.) “The reason that you do not see insects falling down is that they have 6 legs. Because they have 6 legs they are very well grounded and balanced. Even when walking, they always have multiple points of contact, to the ground. This means that they are very stable, and because they are stable they never trip and fall so do not need to go to the ER. You, on the other hand, have only two legs. When walking you sometimes have only one leg (point of contact) on the ground and so your body is very unstable and can tip over and fall.

Maybe my bedside manner was not as well-honed as a medical doctor’s might be, but I thought I made a rather convincing argument.

Of course, I could have added other extraneous facts and complicated words and definitions like “real doctors” do, such as: bipedal (a term that describes how certain terrestrial organisms (including humans) move using just two feet; “bi” meaning two and “ped” meaning foot, thus two feet). On the other hand, hexapedal (if there is such a word) describes six-footed, terrestrial animal movement – such how an insect (or a person using a walker) moves.

Relatively few animal species use bipedalism as their normal method of locomotion. Some reptiles, beginning back in the Triassic period (think Tyrannosaurus rex) evolved a bipedal method of locomotion and enjoyed some benefits because of it. A few modern-day reptiles, such as lizards, still run in short bursts using their hind legs only, but apparently evolutionary advantages have not sustained this behavior in most other reptiles. Some birds, such as a chicken or turkey, use bipedalism much more commonly and even, as in the case of an ostrich or emu, exclusively.

Some mammals, such as rats, mice, springhares and kangaroos, also are largely bipedal, but primates, including apes and especially humans, have mastered bipedalism most effectively.

Consider the advantages of bipedalism. Scientists who study evolution have hypothesized that human bipedalism evolved to allow arms and hands freedom to do other things. Retrieving resources, such as filling and returning home with grocery bags, would be very difficult if arms and hands were otherwise employed in walking. Free use of arms and hands also allows them to be used for painting on walls, throwing rocks, improving personal hygiene, donning clothing, posing for selfies, using tools and many other uses I have not thought of yet.

It’s not just freeing up arms for other things that is affected. Due to an extra curve in the spine to stabilize the upright position, early humans could stand on two legs to gain the advantage of greater field of vision for finding food, locating enemies and keeping watch.

As for the disadvantages, some might argue that bipedalism (fewer legs) sacrifices speed when compared to multipedal movement. This is certainly true when comparing speed of human locomotion with, say, a cheetah or a horse, but consider that animals using two legs, such as a kangaroo or an emu, can run pretty darn fast on just two legs. And, even if slightly slower, bipeds use less energy using two legs to get around, so their endurance for running or walking or hunting or escaping is greater.

Admittedly, using six legs is a bit more complex than the left-right-left swinging gait of a human. You have, no doubt, wondered how insects do it. Being so small and so fast it is hard to observe exactly how insects walk without the use of slow-motion video. Obviously, all six legs have to move in a coordinated manner. Let me break down the basics for you. The front pair of insect legs moves in the same left-then-right alternate stepping pattern that humans use. The rear pair of legs does the same thing. In fact, they do it in concert, just as two soldiers would march in unison, one behind the other. However, between the first and third, an insect has a second pair of legs that march exactly out-of-step, beginning with right then left. Insect scientists call this a tripedal gait wherein legs touch the ground in alternating triangles. It takes a bit of thinking to really capture how this happens but insects coordinate it very well. (Don’t ask how millipedes and centipedes do it – that would take another column.)

Getting back to my conversation with my neighbor: I concluded by reminding her where we started our conversation. “Remember, the reason for your visit to the ER was tripping and falling. The biggest advantage of multipedalism over bipedalism is stability. In your case, using two legs plus a walker will give you the equivalent of 6 legs, just like an insect, and will definitely help you. As an entomologically trained doctor, I highly recommend it. And don’t worry, you don’t have to be as smart as an insect to master six-legged walking. Simply push the four legs of the walker in front of you as you use your own two legs per normal. Anyone can do it.”

I told my family about my experience of being a “real doctor” and tried to explain how crucial my expert recommendation was in this real-life medical situation. They were less impressed than I had hoped.

I was elated, however, when my neighbor friend did actually get a walker. Knowing that the medical doctors had failed, I asked if what I had said finally convinced her to do so.

She replied, “Well, not really. I was convinced when I found that some walkers come with a basket in front for shopping.”

I have decided to leave medical advising to others and stick with “just sort of looking at bugs.”