Cute as a Bug? Where Are the Metrics?

Scientific or empirical evidence must be measurable, unbiased and replicable to be valid, and because relative cuteness scales or indices do not lend themselves to empirical testing, we are left to make conclusions based on anecdotal evidence. While not as scientific, anecdotal evidence still can be used to draw conclusions IF proper metrics and assumptions are established and agreed upon beforehand.

Despite an exhaustive search, I failed to find any “animal cuteness” measurement scales published in peer-reviewed scientific literature. Therefore, I will attempt to establish a set of fair and standardized baby cuteness parameters to aid the scientific community as well as the general public to more fairly compare baby cuteness.

First, we must accept the assumption that my proposed framework is primarily based on anecdotal evidence but strongly supported by personal experience and illustrated by my own, admittedly biased, perception. Given that, I hope it will better inform the “cute as a bug in a rug” question.

I submit that cuteness is based on five factors: 1) physical appearance, 2) behavior, 3) potential to transform, 4) given name and 5) degree of relatedness.

I begin by using relative appearance comparisons. It must be said that bugs do not normally rank high on most baby animal cuteness comparison scales (the exception being those created by entomologists, of course). Baby bugs (insects) do outscore baby worms (annelids), baby mollusks (snails and clams), baby amphibians (including tadpoles and salamander nymphs, with gross, feathery gills coming out the sides of their body) and compare favorably only with baby birds. But as a group, baby bugs and baby birds still rank lower than baby fish, some baby reptiles (such as turtles and alligators, but, curiously, not baby snakes), and much lower than baby mammals – but only those not born naked.

Being born naked seems to never be a good thing if you are looking for a high score on the cuteness scale. For example, newly hatched birds are never very cute. Without feathers they are just not all that endearing. Cuteness scores for mammal babies that are born naked, such as rats and mice, also suffer, and for the same reason. On the other hand, mammals born with hair rank high. At or near the very top are puppies, bunnies, kittens and baby horses. What calloused individual would not sigh, swoon and call them “the cutest things ever?”

Unfortunately, and please do not take this wrongly, human babies are born naked, hairless for the most part, and as such, their cuteness ranking is somewhat negatively affected. Add to that the fact that the birth canal and the birthing process is not kind to human babies – so much so that some scientists suggest that that hatching would be preferable. These combined facts compromise the cuteness scores of freshly delivered infants. Newborn babies rank higher on cuteness indices than baby snakes or baby worms – but only slightly. Baby fish actually rank higher.

Yes, humans can and do artificially camouflage baby appearances. Nurses immediately wrap all but the head of a newborn in a blanket. Upon arriving home, newborns are redecorated by their mothers with big bows around their heads, or in darling little footed pajamas or in any of a number of adorable outfits, like a little sailor or in a beautiful little dress with shoes that have no real function other than aesthetics, all in an effort to bump them up on the cuteness scale. But are they really cute underneath all that wrapping? People who see a newborn baby and say, “Oh, how cute!” have mostly been fooled.

Let’s consider their comparison to “bugs in rugs” more closely. Baby bugs (insects) do not all fall out at the same level. This is because of the second evaluation criterion: behavior.

Bugs that infest rugs rank much lower on the cuteness scale than most of their insect counterparts, and that is largely due to behavior. Rug bugs, such as clothes moths and carpet beetles, are fabric-destroying insect pests. They not only contaminate but they can absolutely destroy silks, linens, woolens, leathers, furs and all other natural fibers. Nobody finds anything cute about this behavior. It causes them to be ranked lower than most other insects, lower than worms and clams and certainly below nearly every mammal or bird.

When you think about it, what could possibly be cute about a bug in a rug? Why would we use that as a benchmark? Clothes moth babies, with their beady little eyes that never close, peering up out of the holes they have chewed in one’s favorite silk scarf, feathered hat or fur coat, can scarcely be considered cute. Similarly, masses of carpet beetle babies crawling throughout the same rug or carpet that we walk, sit or lie upon is hardly considered cute playdate behavior. Rather, such indiscriminate and destructive behaviors cause rug bugs to be considered more repulsive than charming on most scales.

Clearly, behavior affects animal cuteness rankings, and human babies are not immune. They exhibit potentially dangerous behaviors of their own. Infants should never be found far from a “burp cloth” –a misnomer in itself because a burp is defined as a little discharge of harmless air. Babies discharge real stuff, and that is what burp cloths are designed to protect against. While we are at it: Don’t kid yourself, diapers even have a less honorary purpose. They are intentionally kept out of sight, always hidden beneath colorful, warm, soft, baby blankets or under precious little sailor outfits. Hidden or not, they evidence a significant behavioral hazard that undoubtedly affects their owner’s relative cuteness score.

I call this the potential to transform criterion. All animals have it but some more than others. For example, moths, beetles and flies all undergo what is called complete metamorphosis as they develop. They begin life as a fertilized egg but upon hatching, the immature form looks almost nothing like the adult form. Just like caterpillars look nothing like their butterfly parents, carpet beetle, clothes moth or fly babies hardly resemble their adult form. They undergo complete metamorphosis; they completely change. Not just appearance alone, but their behaviors also change drastically; from how they move, to where they live, to what they eat.

Beetles, moths and flies do outgrow their immature stage but it does take a lot of work (feeding, expanding, molting over and over again) before even qualifying for the pupal or transformational stage from which an adult insect emerges. Amazing and beautiful things happen then. But as babies? No, they are not so cute.

Most lower animals remain static, but insects mature and advance on the cuteness scale quite quickly. Birds and many mammals, even if they start off a bit sketchy, potentially transform within days or weeks. “Potential to transform” is also really big when human baby cuteness is considered. They not only fill out and look better but eventually they change behaviorally as well. Within months they can focus both eyes together, learn to recognize other people and even smile. It takes more time (years) but becoming “house-broken” (graduating the diaper phase) definitely bumps them up on the cuteness scale.

Cute given names also make a difference. Puppies, kittens, and cubs generally outscore chicks and ducklings, but even these are preferable to neonates, snakelets, hatchlings or nymphs, which are in turn preferred above names given to insects that live in rugs. Moth babies are referred to as worms, and beetle babies are often called larvae or grubs. Note that both are less demeaning or inglorious than the name given to baby flies. What mother would not be insulted by hearing their baby referred to as a maggot? Right or wrong, given names affect a baby’s ranking on the cuteness scale.

Finally, degree of relatedness is an especially strong factor. The closer the relationship to the one making the assessment, the cuter the baby seems to be. Humans are funny that way. One’s own baby is automatically and always at the top of its parent’s cuteness scale. 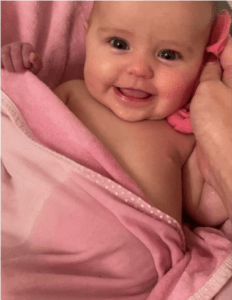 So, I conclude that a baby animal cuteness scale is grounded in appearance, behavior, potential to transform and given name, but is also significantly influenced by degree of relatedness.

If you don’t believe me, you should see my latest little “bug in a rug” granddaughter. Looks a lot like my own baby pictures. Her name is Scout and she is off the charts cute! …. in my unbiased, scientific opinion.