Flowers, Pollinators, and the Ripple Effect

Most people understand that nothing in nature exists in isolation. All nature is connected. Any change in one component affects others, causing more changes and alterations that impact still other components down the line and so on. It is called the ripple effect. Everything is nature is interconnected and interdependent.

Local weather conditions affect the timing of when plants begin to grow, bud, flower and develop. The old saying “April showers bring May flowers” is pretty well accepted as a truth. Weather is also a ripple effect. A cool, wet spring affects plant growth. But here is an interesting follow-up question: If an April shower can bring a May flower, then what might a May flower bring?  Ah hah, astute riddle solvers may say. “I’ve heard that one before and the answer is Pilgrims. The Mayflower brought the first Pilgrims from England.”

That would be a really good answer and you would get a star for it if you were still in grade school. But the correct entomological answer, at least for this column is … pollinators. That’s right, flowers bring pollinators, but pollinators and flowers are interconnected. What is good for one is good for the other, and the reason for that close association or interdependence is because they evolved together – almost hand-in-hand.

According to evolutionary theory, the first flowering plants (we call these angiosperms) made their debut about 200 million years ago. The characteristic feature of angiosperms is the flower, and some flowers developed a very novel way of spreading their pollen from flower to flower. It just so happened that, when these flowers were not being munched on by dinosaurs, some insects that were also buzzing at that time became attracted to pollen as a nutritious food source. However, not all food found the mouth. Like a baby in a high chair at feeding time, pollinating insects ended up with pollen stuck all over their bodies, and they inadvertently spread it wherever they went next, in this case from one flower to another. Early insect-assisted pollination may not have been 100% efficient but it proved to be a distinct advantage over what the flower had before and, of course, the pollinator benefited from the readily available food source.

Behavioral and anatomical changes began to occur in both the flowers and the pollinators, making the relationship even more mutually beneficial.

Such flowers changed their business model. Rather than relying on wind to disperse copious amounts of pollen, with a minimal chance of it blowing to the designated flower, modern-thinking flowers found a better way (and allergy sufferers will be forever indebted.) They determined to produce less pollen but allocate more resources into advertising, including offering rewards in exchange for increased efficiency of pollen movement to the correct site.

Plants began to produce sweet nectar as an additional reward for the insects’ visits and even began to advertise their existence to attract more and better pollinators. Insects began to be more efficient and more loyal visitors and developed anatomical and behavioral adaptations specifically for particular flowers. The changes on the part of both flowers and pollinating insects were mutually beneficial, and they persisted and increased.

When moths and bees began feeding on the pollen and nectar provided by the flowers on trees and shrubs, weeds, fruits and vegetables, flowers began to diversify. Colors, shapes and smells different than the background of green foliage preferentially attracted pollinating insects. While we don’t know which came first, flower colors or insect color vision, what we do know is that they affected the evolution of each other.

The net result is that of today’s nearly 400,000 species of plants, about 90% are flowering angiosperms that show remarkable variation and diversification of flower structure, shape, petal color, size, and fragrance.

These add variety and beauty to our world, and when you think to thank a special friend or a florist for a beautiful bouquet of flowers, you may better thank insects instead – specifically, pollinating insects.

Over millennia, pollinating insects (the first bees, wasps, butterflies, and moths) also diversified and did so in direct correlation with the flowers. Their behavior, visual perception, olfaction, phenology, and body structure, including mouthpart types, wings and legs, all responded and changed.

A study of the coevolution of flowers and insect pollinators is not only fascinating but sometimes even predictable. When comparing them side by side, biologists quickly appreciate the unique correlation between flower adaptations and adaptations of their specific pollinators. For example, certain moths have developed mouthparts in the form of an extendable sucking tube that can be inserted into the long nectary of a flower. The longer the flower’s nectary, the longer the moth’s feeding tube must be if the nectar is to be reached. Such selective pressures, termed specialization, on the part of both the flower and the moth have progressed to the point that, in one extreme case, a certain flower can have such a long nectary that it can be fed on by only one particular moth and vice versa – the moth can feed on only that one flower.

One of the most notable examples of this occurred in 1862, when Charles Darwin, the father of evolution by natural selection, briefly visited Madagascar on his famous journey around the world. He described an orchid that he found with a nectar tube nearly 10 inches long. Based on his understanding of co-evolution, he postulated the existence of a moth with a feeding tube also 10 inches long. Unfortunately, his search for that moth was cut short when the “all-aboard” signal was given at the ship. Apparently neither trains nor ships wait – even for the famous Charles Darwin. Interestingly, however, 41 years later the moth with the 10-inch-long feeding tube was found, exactly as predicted. 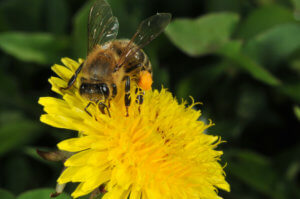 Another example of extreme specialization includes yucca bushes and trees in the American southwest. Yucca flowers are of such specific shape that only one tiny moth (yucca moth) can pollinate them, and the yucca flower is the only flower that a yucca moth can live on. Each is exclusively dependent on the other for survival.

The flower pollinator relationship has been a huge evolutionary success. Today, more than 65% of all angiosperms are insect-pollinated and 20% of insects, at least at some stage, depend on flowers for their survival. The interdependence between flowers and pollinators is fascinating but also delicate. If one is absent or even slightly off, it spells the demise of the partner – a ripple effect.

Alarming scientific studies, published recently, estimate that 21% of all plant species and 40% of insect species are in serious decline and perhaps destined for extinction if trends are not reversed. Further, studies claim that habitat loss is the main driver of the decline, followed by agro-chemical pollutants, invasive species and climate change.

Interestingly, some of the most at-risk insects are common pollinators (moths, butterflies and bees). The ripple effect that their loss might have on plants is unknown but it is certain that the demise of pollinators would lead to a significant reduction in agricultural crops, fruits and vegetables for humans.

Flowers need pollinators and pollinators need flowers. To survive, pollinators need May flowers … and June flowers, and they need flowers in July and August and even September. Keeping flower resources available by planting pollinator gardens with various flowers – especially native flowers that bloom at various times throughout the growing season – is a good way to do that. Much can be done to protect and advocate for preserving meadows and conserving wild areas that harbor naturally occurring flowers and, therefore, pollinators.

In the same way that April shower ripple effects can enhance May flowers, citizens advocating for pollinator conservation can also have an amazing effect on pollinator survival. It is up to us all to begin positive ripple effects in nature.