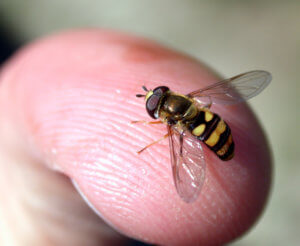 As an entomologist, I find that it often falls on me to serve as a sort of de facto mediator in ongoing or potential insect/human conflicts. My role is to facilitate understanding and communication between both parties with a view to helping them reach a mutually amicable resolution. As a mediator I sift through the facts, emotions and individual interests of each of the parties involved, determine what the real issues are and encourage a fair and logical outcome for both.

Case in point, the annual Hover fly vs. Homeowner dispute that is playing out throughout the Midwest right now. For the past few years, late summer is when homeowners, especially those living near where field crops are grown, are invaded by little yellow and black flies. Homeowners complain that these uninvited trespassers threaten anyone who is innocently and peacefully sitting in lawn chairs or working in the back yard during late afternoons. The threat is manifest by the show of black stripes on yellow bodies (similar to sweat bees or yellow jacket wasps) compounded by their semi-aggressive behavior of swarming around people. Together, these signs are quite intimidating, even though no actual assault has ever been documented. Nevertheless the human reaction is fear, panic and sometimes sheer terror, resulting in screaming, cursing, calling 911 and threats of lawsuits.

For their part, the flies claim to be doing only what flies do — flying around, not hurting anybody or anything, only looking for the odd flower to pollinate or foraging for otherwise unwanted or unclaimed food residues. They contend that they have been doing this for thousands of years and, until now, nobody has complained. They will be present for a few weeks and then move on.  No harm, no foul. As to the charge of trespass, they do not subscribe to the idea of property ownership or boundaries.

As the entomologist mediator, I have determined that most of the reason for homeowners’ underlying fear is the fact that bees and wasps can sting, and nobody wants to be stung. However, I point out that residents can rest assured that these are flies. Bees and wasps can sting, but flies cannot. They have no stinger. Homeowners may say, “Well, maybe not sting, but how about bite? Like horse flies or deer flies do? That is just as bad.”

Hover flies, in turn, are not only offended by any comparison to low-life look-a-like wasps OR to despicable biting flies, they feel disrespected. They insist that they have a name and it is to be used.

Again, as mediator, I caution both sides to take a deep breath and calm themselves. I point out that Hover flies do not have a biting mouthpart. Theirs is more akin to a large tongue used to suck nectar or lick up bits of pollen or other materials in their environment – but never to bite or lacerate. The bottom line is that they have neither weapon: no stinger, no  biting mouthpart.

Having allayed both potential motive and weapon, I explain to people that this is not just any fly but is, in fact, an inquisitive little friend called a Hover fly. There is no criminal background nor historical precedent to cause people to duck, swat, or reach for the spray can. In fact, the opposite is true. Hover flies are beneficial due to both their larval appetites for crop pests – especially aphids – and their help with pollination after they become adult flies.

Once I persuade homeowners that Hover flies are harmless and actually beneficial, I come to my real challenge as mediator, and that is to convince them that they can tell the difference between innocent flies and potentially dangerous wasps. I usually start by explaining how entomologists do it.

Look closely at the wings. Flies always have only a single pair of wings; bees and wasps always have two. When allowed to land on an arm or hand and then are brought up for close examination, one can see these differences quite clearly. And, while in the close observation mode, one might also notice that Hover flies have a comparatively hairless body, are more brightly colored with very distinct black markings on a flattened, yellow abdomen, and have very short antennae when compared to either sweat bees or yellow jackets.

The conundrum is that these characters are easiest to differentiate if fly and wasp are side-by-side and only from a very close distance. People who are deathly afraid of a sting are not easily persuaded that knowing the difference is worth that kind of risk. I can understand when they say that that they would just as soon lump the two together as threatening pests and be done with it.

Of course, this attitude infuriates the flies and nearly causes them to slam their books shut and walk out of the negotiations for good.

THE COMPROMISE: Again, I plead for cooler heads and ask homeowners to try a different approach. Rather than an up-close encounter, how about just watching for behavioral clues? If you are sitting on your deck and a black and yellow insect flies up to investigate you, resist the impulse to swat, scream or run. Rather, watch it for a moment. If it stops in midair to look around, you can be sure it is a Hover fly and therefore is completely harmless. That seems easy enough, right? Most flying insects – including wasps and bees – are incapable of suspending themselves in midair. But Hover flies can. That is why they are called Hover flies – they hover. Hovering can be accomplished only by insects who have completed Top Gun flight schools. Not only can Hover flies hover, but they are capable of astounding aeronautical stunts, such as moving forward, backward, sideways, or up and down, seemingly with ease. They can roll, dive, flip, loop and even turn themselves upside down to land.

I say all of this because if you are watching an insect approach and it appears to freeze in one place, midair, as scrutinizes you, it is definitely a Hover fly. It is not sizing you up for breakfast but merely being polite by approaching and looking you square in the eye while introducing itself.

The proper response is to slowly put out your finger to shake hands.  If done slowly the Hover fly will often carefully land on your finger, showing you that it has truly come in peace, and has only two wings, a spongy mouth and no stinger.

Look closely into the fly’s beautiful, very large, rust-colored eyes for a moment. Fly eyes are called compound because they are made up of many individual units called ommatidia, each similar to a tiny human eyeball complete with a lens to focus light and pigments for detecting colors. Hover flies have more than 3,000 of these, which allows them to see pretty much all around themselves at the same time – 360 degrees, similar to grade school teachers.

For flies, this is an advantage because danger can’t sneak up on them, be it potential predators or fly swatters. However, unlike humans, flies cannot change the shape of the lenses, which means that they have no depth perception. They have to move closer or farther away to see an object clearly – which is exactly what the Hover fly is doing as it stops in front of you and gives you the once-over.

Still, even after all of this mediation, I regret to say that some people will never change. For them, seeing any big-eyed, ugly bug looking back at them is uncomfortable regardless of the distance, or of me having convinced them that they mean no harm. Any insect actually looking back at them gives them the heebie-jeebies and is enough reason to refuse sharing space.

To those people I can only say, “Put yourself in the shoes of the fly. Just imagine what terror must be going on inside the tiny brain of the fly seeing a 3,000-picture mosaic of the same thing you see in the mirror every day. Easily enough to make any fly scream, take flight, reach for a stinger, or call 911.”

So here is where I suggest a truce. Both sides are even. They may never agree on what ugly means, and that is fine. There can be differences of opinion but through toleration, understanding and respect, both sides can live together in peace and harmony.