Insidious flower bug – the size of the fight

As the smallest of six brothers, I was often patted on the top of my head by my grandfather, who would say, “It ain’t the size of the dog in the fight, it’s the size of the fight in the dog.” I never knew what that meant exactly, but by the way he said it, I thought it was supposed to make me feel better and try harder despite my physical stature.

I am just now starting to realize that it might have some deeper meaning. In fact, I find myself saying it to some of the smaller of my grandchildren. They don’t exactly know what it means but it seems to make them feel better.

Not many insects bite people just for fun, but there are a few that seem to. It is not that they are biting to feed on humans; nor does it seem that they are biting out of self-defense. The fact is we don’t know for certain why they bite – but we sure feel it when they do. 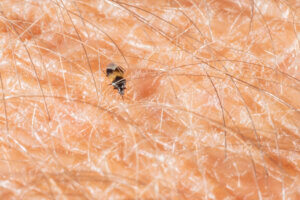 The ones I am talking about are fall-time biters. They are out in full force right now, as days are still warm but nighttime temperatures are decreasing. They swarm us when we are innocently working out in the yard, jogging, bicycling or when we are just out for an afternoon walk. They attack us at outdoor gatherings, picnics, or barbecues, or even when we are relaxing in our favorite lawn chair trying to enjoy what is left of the year’s pleasantly warm autumn days.

They are sneaky. They ambush silently, and when they land they deliver a gallingly, painful stab – one that is impossible to ignore. We swear, swat and look (always in that order) to see what caused the bite.  When we look closely we discover a tiny black bug, no bigger than a large flake of pepper, and are surprised at how such a diminutive bug can deliver such a whoppingly painful bite.

Their attack is unwarranted and certainly disproportionate to their size. This makes them infuriatingly impish pests and may be what my grandfather was actually saying about me, in his own kind way. In other words, “It’s not the size of the pest that matters, it’s how obnoxious the pest is.” Or more directly, “Tim, how can a person as small as you be such a big pest?”

Fall time does seem to bring out the worst of several insect pests. We are somewhat used to mosquitoes, biting black flies or biting midges, punkies or no-see-ums that attack throughout the summer. And we know that these feed on people. But the ones we are experiencing right now are a problem only during the fall, are not flies and don’t bite to take blood. The primary instigators are called insidious flower bugs, more commonly called #%$@&insidiouslittlebiters.

Insidious flower bugs are members of a group of tiny insects called minute pirate bugs. They are mostly black in color, with whitish or silver wing markings on their back. They are approximately 2.8 millimeters or roughly 1/9th of an inch in length, are broadly oval and somewhat flattened in shape. (Although, nobody really knows this for sure because after they are swatted they appear more like just a dark smear, slightly bigger and a lot flatter than they are reported to be in real life.)

Insidious flower bugs have a fairly normal insect upbringing. Eggs are deposited in plant material and hatch in about 5 days. The newly emerged nymphs require 2-3 weeks to mature and become adults (the ones we know as miniature flying thumb tacks). They live another month or so in that stage.

Contrary to popular opinion, insidious flower bugs are beneficial insects – for the most part. They are predators and eat a wide variety of arthropods, including pests such as whiteflies, midges, spider mites, aphids, chinch bugs, springtails, plant bugs, and thrips, and are especially effective at eating the eggs of these and other larger pests, such as corn earworms. As such, they are valuable natural enemies of many agronomic and horticultural pests in crops, including corn, cotton, sorghum, and soybeans as well as garden and greenhouse vegetables. Some are even reared and sold commercially for this purpose – augmentive biological control.

But, for many, many people, insidious flower bugs are themselves pests.

What is strange is that they seem to be so well-behaved throughout the summer before beginning their traitorous and unprovoked fall-time assaults on people – earning them the name ‘insidious’. 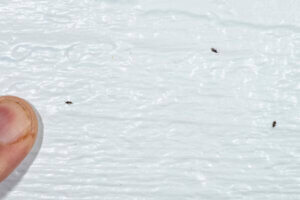 The truth is that although they hurt, insidious flower bugs don’t really bite at all. According to medical entomologists, true bites are made by insects as they feed. These bugs don’t “feed” on people in the literal sense. They do not have biting mouthparts; nor do they extract flesh or blood, so they are not feeding. Rather than bites, these events are regarded as probes to “test” whether you are edible or not.

Sometimes other insects do this as well. Lady beetles and thrips can pinch or scrape your skin during the fall time – especially on warm days. Leafhoppers can also hurt.  Like leafhoppers, insidious flower bugs use their needle-like beaks to probe into human skin, which causes the sharp pin-prick sensation. And, they do it only once, not multiple times. This does not equate to feeding.

I personally think that they are attracted to the odor, color and temperature of the skin, especially if there is some perspiration. While there, they probe with their sharp beaks to test the waters – to see if what they have found is edible. Once they determine that we are not food, they move on. The problem is that they do not communicate well with others of their species.  Each and every bug in their population seems to have to test for themselves, and that is why people come away feeling like a pin cushion.

Of course, others are content to believe that they “bite for spite,” and they are joined in this belief by millions of similarly tormented people from the eastern United States, across the southwest to Utah and southern California, and south into Mexico and Central and South America.

Why they bite may remain a bit of a mystery, but we do know that they do not suck blood or inject any saliva, so in most cases their bite is not particularly dangerous. Some people react more than others and may experience localized swelling and itching that lasts for 4 or 5 days in the area of the bite – much like a mosquito bite. Others feel the initial pain but experience no reactions at all.

Unfortunately, not much can be done about these nuisance pests. They are fairly strong fliers and can move long distances when motivated. In addition, we must remember that during most of the year, insidious flower bugs are beneficial predators and, for these reasons, general insecticides should not be used.

Personal insect repellents may be used and will probably offer some, but not total, protection. Most effective methods of dealing with them are avoidance and exclusion. If you are highly sensitive, avoid places and times when they are most active.  Also avoid direct sunlight on warm days (especially afternoons) in areas where crops or other vegetation is plentiful. Closing windows and doors and using fine-meshed screens will prevent them from accidentally getting into homes. Cover bare skin with dark colored clothing to the extent possible and be especially vigilant if you are perspiring. Finally, be patient. A few weeks’ time and colder weather will bring an end to these nefarious, pestiferous, obnoxious and insidious bugs.

Until then, when you feel the stabbing pin prick caused by insidious flower bugs, just cuss, swat, and scream as loud as you can, “It ain’t the size of a bug with a bite, it’s the size of the bite in the bug.”  You’ll probably feel better.