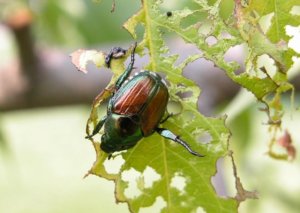 Beatlemania was often used to describe the frenzy, excessive enthusiasm, obsession and fascination directed at a British pop group, the Beatles, when they first arrived in America. Their introduction elicited hysterical screaming by fans whenever the Beatles landed at an airport or appeared in public.

Beatlemania of a different kind accompanies Japanese beetles each year as they arrive in gardens, lawns and agricultural fields in America today. The main difference between Beatlemania and Beetlemania is the type of screaming that is heard.

Let me break down the differences between the two. But first, the similarities.

Both were easily recognized because of their unusual appearance. The four young men with strong English accents wore suits and sported their trademark mop-top hairstyle that eventually became known as a Beatle haircut. Japanese beetle appearance is also distinct. They stand out due to their shiny metallic green bodies accented with iridescent, bronze-colored wing covers. Along each side of their abdomen are six unruly, tufts of white hair.

Both are now famous and easily recognized in every state of the union – although the Japanese beetle is most common east of the Mississippi.

Both are undeniably successful and have left an impact in America that will not soon be forgotten. The English Beatles’ impact on American music is phenomenal and continues today. Even after their hugely prosperous introduction in the ‘60s, Beatle album sales in the last 30 years have surpassed 65 million – not to mention 14 million-plus sales of digital tracks. Their ‘1’ album is still the most popular selling album of the 21st century.

Japanese beetles have created a frenzy of their own. Beetlemania exists because the beetles are not only destructive but persistent, invasive and difficult to kill. They are strong fliers and can fly in from long distances, particularly if sweet, attractive smells from irresistible foods are involved. Japanese beetles are unusual among American insect pests because they are one of the few insect pests that cause economic damage in both their larval and adult life stages. Adult beetles feed on leaves, flowers and fruits while their immature stage (grubs) feed on the underground roots of turf and other grass plants. This double whammy makes them one of the most formidable-plant damaging insects in the country.

So, how do they do it and what can we do about it?

Japanese beetles emerge in late June and early July. Adult female beetles lay up to 60 eggs in their relatively short (2 months) adult life span. The eggs are laid in the soil, where they hatch into grubs after a couple of weeks and grow by feeding on roots and soil organic matter. Wet soil conditions, typical of the Midwest and Eastern states, are perfect for grub survival. They dig deeper underground during the late fall to pass the winter. Once the soil gets warmer in the springtime, the grubs return to the subsurface, where they continue feeding and then enter a pupal stage before they emerge in late June as adults. 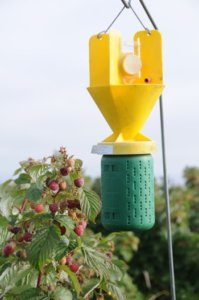 As pests go, Japanese beetles are extremely effective and successful. They are notorious for wreaking havoc on more than 300 varieties of plants including trees, flowers, agronomic crops, vegetables, fruits and yes, even turfgrasses. Trees on their to-do list include linden, maple, birch, crabapple, and cherry, but they feed on many others as well, seemingly avoiding only oaks and evergreen trees. Japanese beetles cannot resist dining on fruits, especially blueberries, raspberries, tomatoes, and grapes, to name a few. They also frequent vegetable gardens, where they enjoy corn, carrots, plantains, beans, and asparagus. Every flower grower knows about the Japanese beetle attraction and subsequent damage to flowers including roses, morning glories, and lilacs.

The most proven and effective Japanese beetle control methods include a large selection of contact pesticides that can be applied to either the adult or grub stage. Alternatively, nematode parasites and even some diseases, purchased either in garden centers or online, can be somewhat effective against grubs if they are applied to the soil well before the beetles appear and exactly according to label directions.

Still other methods of avoiding Japanese beetle damage stoke what I call the fires of beetlemania. It seems that the harder a pest is to control, the greater the number of alternative control methods, and these sometimes include unproven or overrated techniques. The more the beetles appear, the greater the frustration and the more the screaming frenzy escalates, especially when dubious methods of control are bandied about on the internet and in gardening circles.

The problem and source of much of the frenzy is that, in addition to their damage being so visible and widespread, beetles are very strong fliers, can appear all at once, and seem to attack in groups. Find one beetle and you will likely find several – even hundreds – overnight, skeletonizing leaves and devouring flowers and fruits. Hand-picking the beetles from prize roses or vegetables in a small garden is effective but only if you keep on top of it. Repellents against adult beetles include neem oil and even some soaps, but again, they must be reapplied on a regular basis, as long as the beetles continue. Some frustrated growers suggest natural deterrents such as garlic and chives, claiming that their smells are unattractive or even repulsive to Japanese beetles.

Still other frenzied people use lures as an opposite alternative to repellents. The idea is that, rather than repel the beetles, they can be attracted and captured in a small plastic bag or bottle to be disposed of when full. Such Japanese beetle traps, often called bag-a-bug traps, are a good example of beetlemania. Lures utilize a strong floral scent combined with Japanese beetle pheromones that attract male Japanese beetles. Effectiveness of the lure is indisputable. If beetle populations in the area are high or the bags are placed near soybean or other Japanese beetle favorite crops, the bags can fill up in no time. In fact, I have seen the small bags replaced by larger kitchen or even garbage-size trash bags and even they fill up.  That’s how effective the lures are.

The real purpose of the trap, however, is often lost in the beetlemania. If the ultimate purpose of the trap is only to capture beetles, there is no doubt that the trap is effective. However, if the purpose is to protect a yard or garden from Japanese beetle damage, then the conclusion is different. Scientific studies, including my own, have shown that the lures are effective for as far as a mile away, depending on air currents. In other words, beetles will fly toward the trap from very long distances. However, not all beetles that are attracted actually get into the trap. Plants in yards where traps are placed have been shown to exhibit greater Japanese beetle damage than those where no traps are set.

This means that traps placed in your neighbor’s yard will probably attract beetles from yours to theirs. Because of this, I have long recommended that gifting traps to unsuspecting friends as holiday presents is a neighborly as well as a valid Japanese beetle control option. In fact, I once heard of a farmer whose fields were surrounded by new subdivisions using this strategy. After giving each of the neighbors surrounding his field a Japanese beetle trap as a “welcome to the neighborhood” gift, he reported fewer complaints about the noise from his farm equipment AND he also reported better yields from his soybeans.

Bottom line is that the traps are effective in capturing beetles, but unless you are making a giant Japanese beetle collection for display at the state fair, they are not recommended for most homeowners.

Meanwhile, beetlemania, continues strong, even after all these years. Wait, I think I can hear the beetles out there right now happily humming the tunes “Yesterday,” “Let It Be,” “You Really Got a Hold On Me,” “Hard Day’s Night” and “Yellow Submarine” while they are munching away on your “Strawberry Fields Forever.”