Lightning Beetles — Light Up My Life 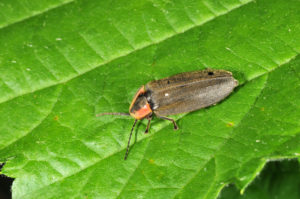 Possibly the most romantic insect in the world is known for the pulses of soft, amorous light it emits in parks, backyards and roadsides on warm spring and summer evenings.

First, the male flashes its seductive light in a quick Morse love code-like signal while hovering a few feet above the ground. Then, the female replies with her own coy blink, proclaiming her whereabouts in the grass below as a subtle invitation to meet in person. It is romantic courtship in the insect world.

But what are they saying exactly?

Well, it may be something as romantic as “O Romeo, Romeo! Wherefore art thou Romeo?” followed by “Here I am my love! Come to me quickly.”

Note: The above translation of insect luminescence communication may be thought a product of Dr. Tim’s personal imagination — but until Google Translate accepts flash bioluminescence as a language, it will have to do. And, besides, I am qualified not only as an entomologist, but I am often told that I am pretty good at romance.

The lines are familiar to anyone who has read Shakespeare’s romantic tragedy Romeo and Juliet. Juliet utters them as she laments over Romeo’s surname and the feud between their two families — the only thing keeping them apart.

Names have also become a problem in the world of romantic insects. The particular insect I am referring to goes by several names, and no one can agree on which one is correct.

Lightning bugs, or fireflies, or lightning beetles? In fact, there are probably as many different common names given to these as any other insect in the world.

I discovered this dilemma after putting a few thoughts together while preparing for this column. I wanted to house them in a folder on my computer but when it came to naming the folder, I was stuck.

Should I name the folder fireflies, or lightning bugs, or lightning beetles, or firefly beetles, or glow flies, or golden sparklers, or fire devils, or moon bugs, or big dippers, or blinkies, or flying embers, or little sparks? How about the name peenie wallies? All of these are common names for the same insect. And each is apparently used by someone, sometime, somewhere, for some good reason — although I have my doubts about the name peenie wallies. What self-respecting insect would be comfortable being called a peenie wallie?

For my folder, I settled on “magic, glow in the dark thingies,” and hoped I would remember the name later.

The name game even got the attention of some Harvard linguistics professors. In 2003, they conducted a dialect survey that asked, “What do you call the insect that flies around in the summer and has a rear section that glows in the dark?”

Leaving etymology aside, entomologically speaking, these insects are not worms, flies, or bugs at all. Rather, they are beetles that belong to the insect group or family that insect scientists call Lampyridae. Thus, the proper and most scientifically accepted common name should be Lampyrid, or lightning beetle, and I will henceforth refer to them as such.

Regardless their name, the Lampyridae family is composed of more than 2,000 species of lightning beetles. Some are nocturnal and some are not. Only the nocturnal species have the ability to produce light flashes. In the United States, most lightning beetles are found in the Midwestern and Eastern states, typically where it is warm and humid.

Lightning beetles live in various habitats, but most live near heavy vegetation, near large stands of trees, or in agricultural or prairie fields, and you can most often see them flashing in the margins between. They deposit their eggs in the ground near ponds, streams, marshes, rivers, lakes, small depressions that hold water, or near soils that are kept moist. Hatched larvae (called glowworms) feed mostly on worms, snails, and slugs.

Most people do not even notice lightning beetle eggs or larvae until they become adults but they are hard to forget after witnessing the spectacular pyrotechnic lighting displays they create. Flashing beetles are often the target of children who chase and collect them in bottles and watch them light up on their night stands or tables later that night. Lightning beetles mostly feed on flower nectar so are never considered a pest.

On March 23, 2018, Indiana (my home state) joined only two other states in the Union to declare the firefly (lightning beetle) as its state insect.

For several years prior, public school children petitioned legislators, urging that the lightning beetle be adopted as the state insect. Our own, recently retired, professor of Entomology, Tom Turpin, advocated for the same, stating that it should be a state symbol because of its wide recognition and high visibility throughout Indiana.

The resulting legislation, which passed with a resounding 93-3 vote, reads:

Whereas, insects constitute 80 percent of the world’s animal species and are critical to the ecological balance of our planet as decomposers, recyclers, pollinators of flowering plants, and an important food source for many animals and even some plants;

Whereas, the insect known as a “firefly” or “lightning bug” is really neither a fly nor a bug but a soft-bodied beetle that produces light through a complex chemical reaction in special cells located near the end of its abdomen;

Whereas, spectacular nighttime displays of the flashing lights of fireflies are common from June through September in the croplands, roadsides, grasslands, and forests of the eastern United States from the Missouri River to the Atlantic Ocean;

Whereas, male fireflies flash their lights in a series of short or long bursts to impress female fireflies, and receptive females respond with flashes of their own;

Whereas, Hoosiers have long enjoyed the beauty and mystique of firefly displays, which inspired James Whitcomb Riley to write: “The fireflies, like golden seeds, are sown about the night.”

Whereas, Thomas Say, an eminent naturalist who lived and worked in New Harmony in Posey County and is considered the father of American entomology, named and described “Say’s Firefly” in 1824;

and Whereas, the designation of a state insect would provide a unique teaching opportunity for educators and a point of pride for citizens of Indiana:

Therefore, be it enacted by the General Assembly of the State of Indiana: that Pyractomena angulata, also known as “Say’s Firefly,” be designated the official state insect of Indiana.

The “whereases” are all impressive facts that legislators probably learned from Dr. Tom Turpin. He knows an awful lot about insects, but the important fact that Tom forgot to mention or to teach was just how romantic lightning beetles are.

Now that I think about it, it is more likely that Tom realized that romance is not his area of expertise — he was clearly in over his head in that regard. I suspect that he intentionally left that to someone more qualified on the subject: Me!

The flashes that lightning beetles produce are species-specific communications. They vary in color (yellow, amber, or green) and pattern (in a single or in a series of multiple sparkles like camera flashes). Others appear as a single sustained glow or burn of up to a full second in duration. While flying upwards or in the shape of a letter J, these are reminiscent of children waving glow sticks in the dark. In some places and times, certain lightning beetle species synchronize their flashing such that the whole population flashes together, creating a mesmerizing spectacle — an enchanted, magical, romantic utopia. 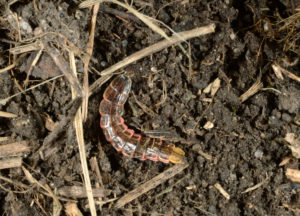 A glowworm or lightning beetle larva. Photo by John Obermeyer.

As much as we would like to think that the light show is all put on for our pleasure — to beautify our world or entertain our children who chase and capture them on hot summer evenings — the true purpose of the light-producing flashes and patterns is for lightning beetles to find and recognize each other.

But even knowing why lightning beetles produce their signature and romantic glow is not always enough to appreciate that they are among only a handful of animals that can actually manufacture or produce light within their own bodies.

The process (called bioluminescence) is a chemical reaction wherein an enzyme called luciferase reacts with a chemical called luciferin in the presence of oxygen. The result of the reaction is the most energy-efficient light in the world — nearly 100 percent of the reaction is emitted as light rather than heat. Compare that to artificial light efficiency — 90 percent in LED, 85 percent in fluorescent and less than 10 percent in incandescent light bulbs. The insect regulates the duration and the intensity of the flash by controlling the size and timing of the bursts of oxygen into the reactions.

Luciferase has proven to be a useful chemical in scientific research, food safety testing and forensic tests. In the past, it was collected by harvesting lightning beetles and then used in the canning or bottling industry to detect whether a bottle was properly sealed. When added inside a bottle, the luciferin would glow in the dark if oxygen entered from the outside — indicating a faulty seal and a potentially spoiled product.

Since their discovery in lightning beetles, luciferin and luciferase have been synthesized and have inspired toys such as glow sticks, LED lights and even some medical tools. They have been used in medical research of multiple sclerosis, cancer and other important medical problems.

So, the next time you see lightning beetles doing their thing on a warm spring or summer evening, remember that their unforgettable displays of bioluminescence and pyrotechnics may not only light up your own life (and possibly inspire personal romantic feelings), but they can also provide a benefit to science.

Just don’t spoil the magic by calling them peenie wallies.