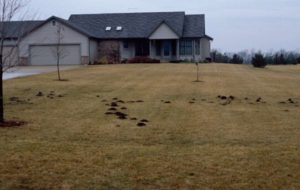 Occasionally I am asked to speak at landscape management meetings about moles – you know, the furry little animals that tunnel just below ground and make such a mess of a lawn. I don’t know why they ask me, an insect scientist, to speak about moles? I assume it is because it just dawned on the guy who was originally asked that he had a previous commitment, such as an oil change, or he asked to back out because he “woke up in a good mood and didn’t want to ruin it.”

I once asked why they picked me, an entomologist, to speak about moles. The answer was, “Well, many of our clients are very frustrated, at their wits’ end – they’re simply being driven crazy. We figured that you might be an authority on the subject.”

Yup, I may be an authority on “crazy” all right. I can give you lots of references who will validate that.

Or, it could be that some clients have bought into one of the many myths or misconceptions about moles. Maybe they have been told that moles can be controlled or repelled by using lawn insecticides, such as those applied for grubs. If so, maybe I can provide the facts to finally debunk such myths.

Moles are largely misunderstood. If people do not understand how moles live, they may buy into just about any wild theory that comes along. Moles live underground and so are not often seen. That makes them a bit mysterious. Mystery is fertile ground for myths. Let’s take, for example, the myth that because moles are gray and furry, they must be rodents. Wrong. Moles are not rodents. Rather, they are an especially unique mammal. They measure about 6–8 inches in length, are torpedo shaped, and have extremely strong, paddle-like front feet, ideally adapted for tunneling.

Moles are perfectly designed by nature to live underground. They are nearly blind, as there is no need for eyesight underground. Instead, they have superbly adapted sensory systems that can detect the smallest vibrations – even the movement of a worm.

They nest deep underground and have a litter of three or four, usually in March. Young mature quickly and are on their own within a month or two. They have abnormally high metabolism rates, which means that they must constantly eat and are active almost year-round, day and night.

Moles make tunnels as they burrow through the soil in search of food. The tunnels are what frustrate landscape managers. The ridges are an eyesore and can interfere with mowing. Some incorrectly assume that moles are eating roots or plants as they tunnel around, but the food that moles are after is not vegetative. In fact, moles are members of the order Insectivora. As such, they eat small animals, such as worms, and sometimes soil-dwelling insects that fall into their tunnels.

A few years ago I performed gut analyses on a large number of moles to determine just what they feed on. The results confirmed that the vast majority of their diet turned out to be earthworms. Some of the other bits and pieces in the moles gut were identified as soil-dwelling insects, such as grubs, ants and a few beetles. But moles live mostly on earthworms. Keep this in mind if you go to a store in search of mole control. Don’t be fooled by a product touted as “mole bait” and is advertised as one that will control “moles and other rodents.” Moles are not rodents, and no self-respecting mole will eat rodent foods such as grains, seeds, peanuts or alfalfa pellets. Baits using these are simply are not attractive to moles.

An old wives’ tale purports that grubs are the reason that moles are in a lawn. If that were true, moles would starve when the grubs are not present (during late spring and early summer). We know that moles continue to survive, because the majority of their diet consists of the ever-present earthworm. So let’s clear up one more myth: That you can control moles by killing grubs in your lawn. Even if grubs were a substantial part of their food and you could remove them, moles would only be forced to forage more widely, thus creating more tunnels, ridges and mounds – exactly what homeowners do not want.

While we are on the subject of tunnels, it is important to understand mole tunneling if control is to be achieved. Two types of tunnels are produced by moles – surface tunnels and deep tunnels.

Deep tunnels are 3 to 18 inches deep in the soil and are constructed by moles during midsummer or winter or during especially dry spells when worms retreat deeper into the soil. Moles always use deep tunnels when the soil is dry because that is where their food is.

Surface tunnels are the unsightly raised ridges in lawns or in flower beds created by moles working just below the surface. A mole is capable of extending surface tunnels at the rate of 100 feet per day. Occurrence of surface tunnels is very seasonal and is how myths about mole control originate. Surface tunnels are created during the spring and the fall (or during very wet conditions) because that is when and where earthworms hang out. 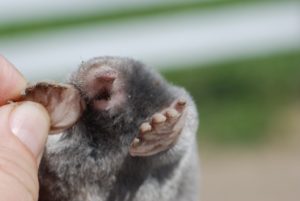 Here is a typical scenario. You are frustrated by moles tunneling all over your yard. Your mole plight comes up in conversation with an older neighbor over the backyard fence. You complain: “They are tearing my yard up. I have tried everything I found suggested on the internet – putting broken glass, dog feces, razor blades, rose branches, bleach, moth balls, lye, and even human hair into the tunnels. Nothing works. Rodent/mole baits don’t work. Repellents have no effect. Daisy wheels and ultrasonic devices don’t seem to work. Hooking up my car’s exhaust system, inserting smoke bombs, and even pumping hundreds of gallons of water into the tunnels through my garden hose and has failed. I tried frightening devices such as mole wheels (spinning daisies), vibrating windmills, and whistling bottles, as well as one of those electronic devices claimed to emit ultrasonic sounds to repel moles. In the end, I still have mole tunnels. I’m at a loss. I think I am ready to try voodoo next. What would you suggest?”

This is the worst thing you can ask. Never mention the word voodoo to an older neighbor and then ask for a suggestion for mole control. This is setting yourself up. Here is why: The older guy may actually HAVE some crazy voodoo recommendation complete with a testimony of how and why it works. It is likely to include something as absurd as placing Juicy Fruit or bubble gum into the tunnel – ostensibly because when eaten by the mole it causes “death by constipation.”

I can’t even fathom the psychological trauma that might come to a mole trying to blow gum bubbles underground, let alone imagine one expiring due to gum-induced constipation.

Fortunately, there is no merit to these kinds of recommendations. Unfortunately, some can be hazardous to companion animals, wildlife, or detrimental to the environment. Furthermore, as far-fetched as such recommendations might be, you are stuck. You actually asked for it and you know he will check up on you. At this point in the season (late spring) all else has already failed, and so you may think “Why not give it a try?”

What is amazing is that the tunnels disappear. Eureka! Success at last!

The problem is that mole surface tunnels will disappear at this time of year anyway. It has nothing to do with voodoo but is because as the soil dries during the summer months, the worms migrate deeper in the soil, and the moles follow. They live in deep tunnels. Surface tunnels are gone and the only above-ground sign of a mole may be volcano-like mounds of soil occasionally dumped on the surface as the mole excavates deep runs. You may overlook this because you are so excited about having found a mole control remedy that works. You not only invite the old neighbor over for BBQ but you also pass along on the gum or other voodoo recommendation at first chance, and you’ll also swear by it.

This is how mole control myths are propagated!

Unfortunately, this is never the end of the story. Mole surface tunneling will reappear when the soil becomes less dry and the earthworms move upward. Homeowner frustrations will reoccur, new remedies will be tried up until late fall, when another old wives’ tale emerges, co-incidental to when worms and moles again begin to move deeper into the soil for the winter. Whatever home remedy or recommendation was last tried will be touted as the magic technique and will be endorsed all winter long.

The main points that I try to hammer home to an audience are these:

1) Moles eat earthworms – they are not herbivores. They follow their food source. When earthworms stay deep in the soil when soils are dry or are frozen, so do moles.

3) Forget the myths, gimmicks, gadgets and voodoo recommendations. Moles can be controlled by trapping (harpoon or spring-loaded scissor traps are most common) or by using worm-shaped baits containing Bromethalin on actively used surface tunnels. 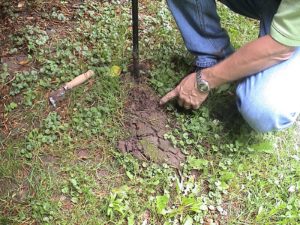 Usually my lectures are appreciated by the younger guys in the audience. They quickly see the fallacy in crazy, mole control home remedies when I explain mole behavior and biology. The older guys are not so easily convinced.

After spending an hour trying to persuade one audience about why some of the old wives’ tales about mole control are nonsensical based on the facts known about mole behavior, one old-timer in bib overalls at the back of the room raised his hand.

“But Doctor Tim, you did not mention using ‘tobacker’ to control moles.”

I thought to myself, “Have you not been listening? Moles are insectivores = point #1. Why would they be interested in tobacco?”

Nevertheless, I played along. “OK sir, how do you use tobacco to control moles?”

“Well, ya jus put a plug a tobacker down inta the tunnel. Then when they come up ta spit, ya jus hit em o’er the head wit a shovel, har, har, har.”

At once everyone picked up a pencil and began taking notes. I could tell that they were just bursting to get out and try it.

Should have had the old guy do the whole lecture.