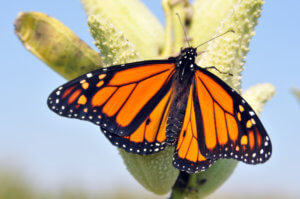 When going to work each morning, my son-in-law dons nicely pressed khaki pants, a collared shirt and polished shoes. He even combs and wears mousse in his hair. He carries his cellphone on a clip on his belt next to his keys for all to see. His name and the company he works for are proudly displayed on a name badge that he wears above his breast pocket. He looks official, smart, progressive and intelligent.

Such deception has parallels in the insect world — specifically, with the most well-known and awed American butterfly of all: the monarch (Danaus, plexippus). This regal butterfly, cloaked with orange and jet-black wings accented by white spots, was named the monarch (meaning royalty or king) by early settlers in North America. It was a tribute to their homelands’ beloved Prince William of Orange. (Orange was a principality in southern France.) The names both endured. Prince William became King (or Monarch) of England, and the name monarch butterfly became commonly accepted. In science, the monarch butterfly belongs to the family Nymphalidae and subfamily Danainae.

Monarch butterflies may be best known for their truly amazing migration ability. Other butterfly species may emigrate from one area to another to avoid temperature extremes or to find food, but the monarch is thought to be the only American butterfly that truly migrates – that is, actively leaves from and returns to a certain site at the end of the season.

There are smaller breeding groups of monarch butterflies, but the largest and most famous begins its trek each year from a small valley in Mexico where it has passed the winter. The first stirrings of spring elicit a centuries-old migration instinct, deep in its butterfly DNA. The migration first takes them northward, through the prairies, wetlands and meadows of all America west of the Rocky Mountains, and well into the Canadian prairie provinces, sometimes more than 3,000 miles away. The trek may require as many as four generations to make it to the northern extremes of their range, each adult laying eggs that become butterflies and continue north, one generation after another. However, new research from Ontario, Canada, also shows that as many of 10% of the adults leaving Mexico actually make the trip in a single generation. This is more than 2,000 miles — an astonishing feat for any animal, and especially so for a small insect using fragile wings composed of a delicate membrane less than 60 micrometers (.0025 inches) in thickness.

After feeding and reproducing during the summer months, the return trip, made by their progeny, is an equally staggering accomplishment. In mid- to late summer the returning monarchs fly south, as far as 25 miles per day, until they arrive back in their overwintering valley in central Mexico, a comparatively microscopic dot on a map compared with the whole of North America.

The monarch brain is smaller than the head of a pin. How these individuals, which have never themselves been in this valley, find their way back to that particular location has been amazing scientists ever since the valley was discovered in 1975. It is thought that monarchs cue in on both the position of the sun and Earth’s magnetic field to help them determine direction and then make use of favorable wind currents and temperature thermals to gain enough altitude to allow them to glide for long distances without expending undue energy.

Migrating monarchs frequently stop along their way north, and again when they return south, to take nectar from flowers to help sustain their flights. Regardless, they must be exhausted by the time they reach their destination. Upon arrival they enjoy a well-deserved rest by simply clinging to trees and branches by the thousands, resting and regaining energy by drawing slowly on their stores of body fat. During the winter months they occasionally flutter about and take water from local ponds, but immediately return to their overwintering trees with the others.

The overwintering site in Mexico is particularly well suited for monarch survival due to the consistently cool, moist and protected surroundings. The elevation is high enough to keep the monarchs from heat exhaustion, and the latitude is far enough south to keep them from freezing.

Estimates of total monarch population size varies in direct relation to the size of the overwintering area that is occupied each winter. In 1996 it covered 44 acres but has been progressively shrinking at an alarming rate. Most recent estimates  (2017-18) are in the order of only 6 total acres. That said, we noticed a higher number of monarchs throughout the Midwest this summer and hope that it signals a banner survival year for the monarch migration back to Mexico.

Monarch survival is dependent on several factors, including parasite loads, diseases, and unfriendly conditions, such as droughts, through which they must travel. Availability of conducive habitat that includes milkweed is also crucial.  Several pollinator conservation efforts are dedicated to protecting the monarch, and habitat conservation and is one way that the public can most effectively help. 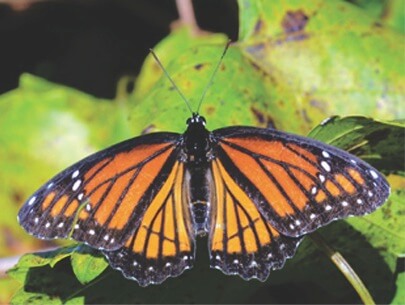 Some groups recognize that milkweed plants, needed for caterpillar development, are becoming less and less common and so have started monitoring, conserving and even augmenting milkweed populations. Some groups focus on increasing the number of nectar-producing flowers — essential for adult energy — along the migration route. Others assist in butterfly watch projects that track and assess yearly populations and ranges by tagging and releasing monarch butterflies along the way. Still others assist by rearing caterpillars in relatively safe enclosures to increase their survival rate and then release them back into nature. Each of these efforts significantly improves the chances of survival of this majestic species.

Monarch butterflies are not only known for their epic migration but also because of the very restricted places where they lay eggs — and the resulting very fixed menu offered to their caterpillars. Only an exceptionally few insects can tolerate eating the leaves, flowers and seed pods of milkweed plants. Milkweed plants contain a thick, foul-tasting, milky liquid (hence their name) that bleeds when the plant has been damaged. This liquid is primarily intended as a plant defense, a deterrent to any animal eating the plant. The liquid, as well as other plant tissues, contains compounds called cardenolides that are quite toxic to insects and thus provide protection against herbivory. Monarch caterpillars are an exception.  They can feed and develop exclusively on milkweed plants. In fact, the caterpillars not only have become immune but they actually accumulate these toxins within their own tissues. In this manner, the caterpillars and eventually the adult butterflies become toxic themselves. Should a bird or other predator attempt to eat them, the toxins, originally from the milkweed plant, are transferred to the bird via the monarch and the bird becomes violently sick and tries to vomit the monarch out.

Vomiting for a bird must be life-changing because birds learn very quickly to avoid eating monarch butterflies. This is relatively easy because, as mentioned earlier, the distinct orange and black coloration of the monarch is unique and serves as a bold warning: DO NOT EAT ME — OR ELSE!

This defense is so good that it even offers protection to a separate species of butterfly, the viceroy (Limenitis archippus), which does not feed on milkweed at all but has evolved to look almost exactly like monarchs. Scientists call this impersonation “mimicry.” In mimicking, or displaying nearly identical orange and black wings, viceroy butterflies fool birds (and beginning entomology students) into believing that they are, in fact, monarchs.

This is where the deception comes in that I warned of at the beginning of this article. (See photos). Through deception (looking like something they are not), viceroy butterflies gain protection from the predators that have learned not to eat monarchs. Because viceroy butterflies look just like monarchs, predators  avoid them, too.

This advantage is gained because they look like something they are not. So, although effective, the age-old trick of mimicry is not new to my son-in-law. It can impress, I will admit. I just wish he would spend more time studying and working and less time trying to look like something he is not.