Plague of Locusts – or Whatever They Are Called 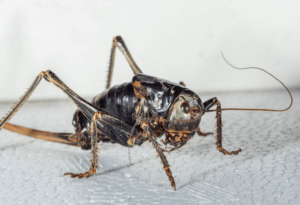 What’s up with all the locusts, or whatever you call the “hoppy” insects that are all over our neighborhood. Is this the start of a plague? They look like normal grasshoppers to me except that they are everywhere. Can you explain this and will we have them again next year?

Signed Moses (Note: Moses is not the submitter’s real name. I use that as a nickname because it seems to fit the situation, and I will show you why.)

The hoppy insects you are seeing very likely are grasshoppers, although they could be crickets or even katydids. These all belong to a group or order of insects that we call Orthoptera. The term “locust” is actually a common name, usually given when populations of any of these “hoppy” insects become exceedingly abundant and change their usual solitary behaviors to almost social. When high numbers of these orthopteran insects begin to cluster and move in unison, they are referred to as locusts.

You are justified in referring to your experience as plague-like because it can be somewhat reminiscent of one of the 10 plagues visited upon Pharaoh, as recounted in the Bible. Huge populations of locusts are capable of moving vast distances, creating terror for people and decimation of any plants in their wake, including agricultural crops.

Unusually successful egg hatches are followed by enormous populations of wingless nymphs that feed and grow larger with each molt. Their ravenous appetites deplete local vegetation and precipitate a primitively social behavior of “banding” together and moving in noticeable waves. Bands, in turn, merge and develop into huge swarms of winged adults – some estimated to be in the tens of billions. These travel even greater distances in even shorter times. When either the bands or swarms descend, green vegetation can be literally wiped out in minutes.

Such locust migrations are common in Africa and the Middle East but are not unheard of in the Americas. Earlier this summer, unprecedented numbers of grasshoppers swarmed in Nevada and Colorado, creating agricultural mayhem in the country and panic in the cities. Descriptions by those who personally experienced these include “swarms so thick that the sun is blocked” and “visible on radar and from outer space.” On the ground, they are said to “impede traffic”; “can be scooped up by the shovel full”; “consume every plant in sight”; “reminiscent of a horror movie”; and “even cannibalize each other when no plants are left.” Seeing this firsthand must be an unforgettable experience.

I’ll leave it to you to decide if the population in your neighborhood can be considered a plague. It is all a matter of perception. But I do want to return to the question of names.

By definition, nicknames or common names are informal labels given by a local community of people as a descriptive substitute for, or in addition to, the proper name of a person, place, or thing. Sometimes nicknames are given because of a particular attribute, but they also may be given to describe an event, a place or an association with a similar group.

For example, when the hordes of grasshopper locusts in Las Vegas became so thick that streets, buildings, outdoor concerts and parks were closed, they acquired names different than the proper name. Most of the improper names cannot be written in this column but, consistent with the Sin City’s reputation of rolling with the punches, the event also inspired new toppings for pizzas (chili-lime flavored dried grasshoppers) called Canyon Hopper Pizzas and several new names for alcoholic drinks in honor of the phenomenon.

In a similar but different way, Mormon crickets were a devastating locust plague in Colorado, Idaho and parts of Utah again this year. The Mormon cricket is a large insect, almost 3 inches in length, that occurs in arid rangelands in the western United States. Even though they are flightless, swarms are capable of migrating up to nearly a mile per day, becoming very serious agricultural pests and even traffic hazards.

They take their common name from the first Mormon settlers who, after being driven out of Missouri under the governor’s extermination order in 1838, made their way westward, finally arriving in Utah. After planting their first crops they experienced and recorded what they called a “plague of crickets” that descended on their first crops, nearly eliminating their chances of survival. This was not the first or last time that these pests swarmed in masses, but because of who first documented it, they were named Mormon crickets by association. Interestingly, the name Mormon is also a common name or a nickname given by others to these early pioneers, and subsequently to their church, because of their belief in a book of scripture called the Book of Mormon. The actual name is the Church of Jesus Christ of Latter-Day Saints. So, to recap, this insect is commonly called a Mormon cricket because of its association with pioneers who were called Mormons because of their association with a book called the Book of Mormon.

Confusing for sure, but this common name mix-up story gets even more convoluted because it turns out that the Mormon cricket is actually neither a Mormon nor a cricket. In fact, it is not even a grasshopper. The Mormon cricket is actually a katydid. Katydids are members of a separate family of orthopterans called Tettigoniidae. Curiously, this particular katydid is given the scientific name Anabrus simplex. I don’t know what Anabrus in Latin means but simplex means straightforward or uncomplicated – which is exactly the opposite of how this insect came by its common name. Nevertheless, a stone monument and plaque depicting the Mormon cricket and its association with the first Mormon pioneers in Utah is exhibited in a prominent location for all to see. The problem is that the sculpture is clearly that of a grasshopper – it is neither a cricket or a katydid. Maybe the differences are only important to entomologists. But wait, the name confusion twists even more.

Early pioneer journals account the struggling to beat back the hordes of “crickets” with shovels and gunny sacks – then witnessing thousands of seagulls descend and gorge themselves. Years later, and in commemoration of helping save the first crops planted in Utah, the seagull was named the state bird. A beautifully sculptured monument of two seagulls stands in the center of Salt Lake City, immediately in front of Temple Square.

Sadly, the early founders of Utah consulted neither entomologists or ornithologists for correct proper names because not only is the Mormon cricket neither a cricket or a grasshopper, but the scientific name of the seagull they chose as their state bird is Larus californicus – common name, the California gull.

Such cases of confused or mistaken common names are prevalent and not limited to seagulls, locusts, crickets, or Mormons. They can result from incomplete information or perceived associations – sometimes correctly and sometimes …. well, not so much. But apparently if two or more people agree on what a name should be, so it is. Sure, confusion is a consequence but fascinating stories emerge when we begin using haphazardly assigned common names.

So, there you have it, Moses, or whatever your common name is. I hope this clears that up for you.

P.S. My less convoluted and less interesting answer to your locust plague question is as follows. 1) Your hoppy locust insects are very likely grasshoppers. 2) They are most abundant in arid regions but higher than normal populations can follow summertime droughts, much like we experienced in parts of the Midwest this year. 3) I cannot predict what weather conditions next summer will bring so as a result, have no idea if you will be plagued again next year or not.