Plan to Run from Killer Bees 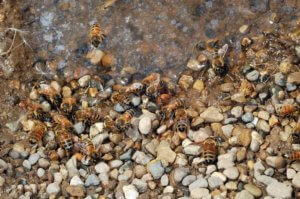 This spring, for the second time since 2005, A.J. Foyt was attacked by Africanized, killer bees. Known to millions of fans simply as A.J., the American race car driving legend won a staggering number of races in several types of cars. He is one of three (Rick Mears and Al Unser) drivers to win the Indianapolis 500 four times.

According to news releases, both attacks occurred while Foyt was on his bulldozer at his Texas ranch when he accidentally disturbed an unseen bee hive. Foyt is quoted as suddenly seeing “a big cloud of them, like you see in the movies,” rise up and come after him. After being repeatedly stung, Foyt jumped from the bulldozer and began to run toward a swamp on his property. He fell down, and the bees continued to sting. He ran again, but the bees put him back on the ground.

Foyt thought he would die. “I don’t know what gave me the willpower to get up, but I made it to the swamp, fell into the mud and just laid there with my head in the mud until they went away.” He called the experience the “spookiest thing I’ve ever been in. … I don’t ever want to go through it again.” A.J. Foyt knows a close call when he sees one.

Yet as fate would have it, he did go through it again this spring. The same bulldozer was involved and again, paramedics were called. Foyt thought he got off lucky even though 161 bee stingers were pulled from his face and lips alone. “I look like I have had a fight with Mike Tyson and lost,” he quipped.

The story generated quite a buzz (pardon the pun) on social media, resulting in plenty of debate, speculation and even some valuable questions and answers that I have included below.

The questions that fans ask: 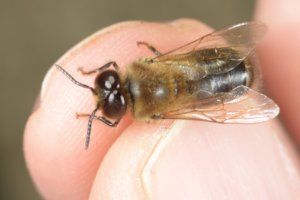 What was the outcome? Paramedics gave him a shot of Dramamine, but he refused to go to the hospital, at least not until the bees were dealt with. “I got 15 gallons of diesel fuel and dropped it and set those &&%$#@s on fire,” he said. “I felt a lot better after that.” Caution: While we are relieved that A.J. feels better, be it from drugs or revenge, we do not recommend controlling bees in this manner.  Professional pest managers should be summoned.

Can a person really outrun a swarm of bees? In theory, yes. However, it is really hard to set up an experiment to prove it. The difficulty is finding volunteers willing to poke a stick in a hive, then wait until someone with a stopwatch says “Go!”

How fast can bees fly and humans run? Bees are not as fast as you might guess.  A bee’s top flight speed is about 12 to 15 miles per hour. They seem faster because they are very acrobatic fliers and can accelerate quickly. The fastest human sprinter recorded is Usain Bolt, at 27.8 mph. Foyt is fast in a car but let’s face it, he is not Usain Bolt on foot. At 83 years of age and being a bit on the heavy side – his eating habits are legendary, too – he is not in his prime. Even with a swarm of bees coming after him, I doubt he could achieve 12 mph.

Should Foyt have just stayed on his bulldozer? Outrace them? ’Dozers are powerful but even with a hall of fame, race car driver at the controls, top speed is probably only about 8 mph. But I know what you are thinking, and you have a good point. If his bulldozer had an airtight, sealed cab then, yes, by all means he should have stayed there and waited until the bees gave up – usually about 20 minutes. Same is true for retreating to a car or even a house. Shelter is your first option.

So if I find myself exposed to a swarm of angry bees, running away is your best advice? Yes, the best defense is to run. If you are by yourself, run as fast as you can. If you happen to be with another person, try to run a bit faster than them. I know, that is an old joke, but it is true that the bees will identify the first moving target, and that is primarily who they will attack. Don’t be him. Get out of there as fast you can.

If they attack a moving person, shouldn’t I just freeze? Interesting thought, but I suspect that every thought, just before death, is probably interesting. By the time you see the swarm coming, they have already identified you and will attack. Their mission is to get you out of their area ASAP, and they will continue to sting as long as you remain. So don’t freeze, just run. Note: if you are with another, potentially faster, runner, you might try yelling “freeze” as loud as you can …  and then keep running. (That is a new joke.)

What are killer bees and where are they found? European honeybee strains were crossbred with more aggressive African honeybees in an effort to increase honey production. In 1957, these “Africanized bees” escaped quarantine in Brazil and slowly began spreading. By 1985 they were in Mexico, penetrating the southern border of the United States. Presently, they are in 12 southwestern states. How far north they will be able to spread is unknown.

Why are they called killer bees and are they really more dangerous? Killer bee is a colloquial name given to the hybrid or Africanized cross strain. The name elicits fear beyond that which is justified. In fact, few people can tell the difference between the two just by looking at them. The consequential difference is behavior. Africanized honeybees react to a nest disturbance faster and more aggressively. They sting more readily and pursue much farther – even up to a quarter-mile. They definitely have attitude, and that makes them more dangerous.

Is killer bee venom more potent than regular honeybee venom? No, venom does not differ much, but killer bee attacks often result in 10 times as many stings.

What happens if bees sting you? Bee stings hurt, there is no denying that.  Multiple bee stings hurt even more. But an online medical website written by medical doctors states that most people can survive about 10 bee stings per pound of body weight — or more than 1,500 stings per adult.  (Again, I don’t know how these data are acquired. Perhaps statistics are revised each time A.J. Foyt suffers a bee attack and we are relying on him for all of our killer bee sting research). In any case, records indicate only about 50 deaths per year. In most cases, those victims were hyperallergic to bee venom, or for whatever reason couldn’t get away from the swarm.

Foyt said he buried himself in a muddy swamp. Would that really help? Nope, it would probably not help. You can’t fool an angry bee. Remember, they defend their hives against bears on a regular basis. A muddy face is not going to deter them. Even completely submerging in water will only delay the outcome because bees are known to hover and wait for their victim to come up. Maybe swimming underwater for a long distance would throw them off. Again, I really don’t know. Other than A.J., it is so hard to find volunteers for such a study. Maybe I’ll ask him to provide some aquatic data next time.