Repletes and Food Storage by Insects

Food consumption is on Americans’ minds right now with recent Thanksgiving Day feasts under our belt (literally if not figuratively), and Christmas dinners, Hanukah celebrations, and New Year’s festivals in the near future. What holiday is complete without consuming ridiculous, even epic amounts of food? It is what we do. It is expected. We engorge to repletion until we are sure that we cannot possibly eat another bite. Then we do it again, if not at the very next meal then certainly at the next holiday.

It is a sad reality that humans are amateurs at making ingested food last more than a few hours. We eat, we digest but we are soon back at the refrigerator or the pantry, looking for a repeat.

I was recently asked an interesting question by Christine Peterson, a freelance writer for the Nature Conservancy who was researching an article about what we can learn from other animals that store foods for use later. Her subject may be timely considering that humans, though inept at making an ingested meal last, actually excel among all animals in food storage abilities. We do it better than any other animal and, in large part, that’s what makes us successful.

Of course, humans are not the only animals that hoard food for the purpose of using it in upcoming leaner times. Several birds stash foods in various caches for later use. Some predatory mammals bury excess foods for short-term storage, and other mammals, such as rodents, actually sequester seeds and nuts in a specialized compartment of their nest, technically called a larder, for use several months later.

Even so, these stashes, caches and larders pale in comparison to what humans can do. American agricultural facilities, including granaries and refrigerated buildings, store vast quantities of raw food stuffs. Warehouses and grocery stores are stacked with processed and packaged foods. Homes are equipped with pantries, closets, cupboards and shelves to stockpile canned and dried foods. Refrigerators and freezers preserve perishable foods. Humans are indeed efficient at storing foods – at least externally. But how do they compare with animals that store foods inside their bodies?

Animals, including humans, produce and store fat reserves during times when food is plentiful, then metabolize them later when needed. Hibernating bears are best known for this survival technique. In conjunction with reducing activity, lowering body temperature, restricting breathing and heartbeat to minimize metabolism (a process often called hibernation) using stored fat overrides the need for finding food during a season when food is scarce.

Christine asked, “Do insects also store food?” The question is interesting and  almost certainly on the minds of many of my most inquiring readers – at least those with nothing better to contemplate during this holiday season.

Aesop, though a great storyteller, was obviously NOT an entomologist because we know of no grasshopper that has actually changed its behavior by watching or listening to preachy ants and further, we know of no grasshopper that ever stores food. In fact, the vast majority of insects have the grasshopper-like “come what may” philosophy. If they have enough food at present they don’t really seem to care about the future.

Rather than storing food for episodes of upcoming hunger insects ensure survival in other ways. They migrate to warmer areas or change their physiology – they also go into a hibernation-like period of inactivity that requires very minimal food resources, or they avoid the issue entirely by making themselves or their offspring somewhat freeze-resistant by changing their blood composition in a way that is very similar to how antifreeze works in a car.

I was initially stumped to provide any sort of example of an insect that actually stores foods. The only real example I could come up with – other than honey bees and their huge stores of honey – is a particular ant, called the honeypot ant. Christine Peterson’s published article sums up its strategy quite succinctly. (https://blog.nature.org/science/2020/11/23/animal-hoarders-how-creatures-feast-for-winter/)

Most insects have adapted to harsh winters not by stockpiling food, but by either migrating away from the cold or by leaving behind freeze resistant eggs or queens. It’s much less about survival of an individual and much more about propagation of the species.

Honey ants, on the other hand, function much more like the eponymous honey bees, Gibb says.

The ants spend much of the fall gathering a sticky substance called honeydew. While it sounds lovely, honeydew is actually an attractive name for a sugary by-product aphids and scale insects excrete from their behinds after sucking sap from plants.

The ants collect that honeydew, take it back to their colonies and feed it to designated ants called “repletes.” Overtime, abdomens on the repletes swell to many times their normal size.

But wait, it gets better.

The repletes are hung upside down from the ceiling throughout the winter – like living storage containers. When food in the colony runs low, repletes are urged to regurgitate their honeydew for the collective enjoyment of the colony. 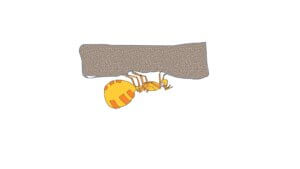 Honeypot Ant (serving the colony as a ‘Replete’)

I thought about this over Thanksgiving dinner as I stuffed myself until I could hardly get up from the table to waddle to the recliner for my traditional 3-hour digestion nap. What if we were like the honey pot ant and could save what we engorge for later use?  What if humans could stop digestion after the big meal and dispense it incrementally – actually enjoy a little bit of Thanksgiving dinner every day for the rest of the year? As I loosened my belt, I appreciated the fact that human skin can stretch an amazing 3 to 4 times normal, but what if it could stretch 30 to 40 times normal, like the arthrodial abdominal membrane of the honey pot ants?

The idea of using family members as repletes (living storage pots), stuffing them with food until their bodies swell up like water balloons and then hanging them by their boots from the pantry ceiling, might take some getting used to, but it would certainly be efficient.

When other family members feel hungry or in need of a nice light snack, they would need only to saunter into the larder and crack open the spigot on the replete of choice until it dispenses lunch, a process called trophallaxis. A bit bizarre and macabre, to say the least, but nonetheless fascinating stuff to ponder, even for an entomologist.

Exactly how and why worker ants select specific members of the colony to serve as repletes is interesting to contemplate as well. Would they be volunteers or would this be an assignment? Would there be a selection process based on appearance or a tryout based on one’s ability to expand? Would it be something they campaign for?

As I was nodding off to a peaceful, satisfied slumber, I imagined the repletes chosen from my own family, each with greatly distended abdomens and all hanging in a row in the pantry.

A definite shoo-in would be Uncle Mike, who “didn’t even save room for dessert.” Cousin Easton, a teenager with a ravenously insatiable appetite who “could not possibly eat one more bite” would be a likely candidate.  And of course, my son-in-law, who stuffed himself nearly to the point of bursting after saying, “Don’t mind if I do” every time he was offered a second, third or fourth helping.  And Aunt Ferty, who is 9 months preg….. hey wait, who put her in there?

Yup, the ants are on to something when it comes to efficient food storage techniques.  Maybe we COULD learn something from them after all.