The Buzz is Worse Than the Bite – Usually

The whole country was abuzz a few months ago when reports of Asian giant hornets hit the media. The news story was evidently a good one because it reverberated from print to broadcast to internet and back again. It was one of those stories that captured people’s interest immediately – and what’s more, people remembered it, at least the sensational part of the story, that is.

It was their huge size (reportedly in excess of 2 inches in length), robust bodies, menacing look, complete with aggressive reputation and sinister name that really made the story memorable.

Hornets, like honeybees and yellowjacket wasps, exhibit an advanced behavior that we call sociality. Social insect societies are almost exclusively female (a very few reproductive queens and many non-reproductive females, called workers, with a sprinkling of males here and there, just for entertainment). Less than 2% of insect species have evolved this remarkable level of social complexity but have become amazingly successful because of it. By working together or dividing the labor, social insects gain improved foraging, achieve higher reproduction rates and create more effective defenses.

Their stronger defense comes because the workers use their modified egg-laying organs as weapons called stingers. Arming all workers with a venom laden stinger and a communication system to converge on a suspected danger is a very effective protection strategy. And memorable, as anyone who has bumped into a bee or wasp nest can attest. All workers in the colony stand ready to attack a would-be trespasser, en masse and all at once. Asian giant hornet colonies have this ability, and a quick temper back it up.

The news media made them out to be insane killing machines ready to take over our country. Even gave them a new name: Murder Hornets. The media buzz caught people’s attention and is what most remember.

The parts of the story that seem to have been forgotten are that the discovery of Asian giant hornets in North America was limited to a single find in British Columbia, Canada, in the fall and a second in Washington State this spring. Hardly an invasion, and scientists assure us that it is quite unlikely that the Asian giant hornet is going to take over the country. A colleague from Purdue, Dr. Elizabeth Barnes, published answers to questions most people have (https://www.purduelandscapereport.org/article/murder-hornets-should-you-panic-probably-not-heres-why/).

The Asian giant hornet is a potentially gruesome predator of honey bees, but contrary to the implications brought on by its recently acquired appellation, the murder hornet does not seek to murder or sting people. It defends its nest, as do all social insects. Defense does not equate to murder. If a nest is threatened or disturbed, these wasps do become aggressive. Data from Asia, where giant hornets are common, report only 40 deaths per year from hornet stings compared to more than 60 deaths in the U.S. due to bee or wasp stings.

Interestingly, in both places a whopping 80% of the human victims happen to be male. You may ask why that is but, with a little imagination, you will quickly surmise your own answer and conclude which group (males or females) probably deserved to be stung.

Nevertheless, we have all been put on guard, and large wasps everywhere are now eyed with suspicion … in many cases fingered, tried, judged, and executed, “just in case” by aspiring, save the world, pest controllers. I know this because many texts, telephone calls and e-mails have come my way, citing suspiciously large wasps having been found – but thankfully eliminated by this vigilante militia.

Granted, the Asian giant hornet is large, but we have several sizable wasps in America as well. European giant hornets (close cousins to the Asians) and more commonly, the cicada killer wasp both appear nearly as substantial, especially to lay people. 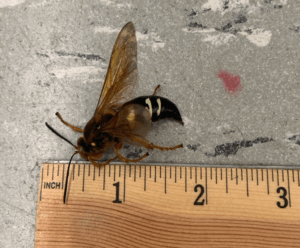 Even my own son-in-law joined in the mania by “nuking” one that he found outside his home, with an insecticide – and in his mind saving the country from an invasion and his family, community and state from certain annihilation. Like many people, he sprayed first and asked questions later.

I waited until he brought up his story in front of a group of people before publicly pointing out that he most likely did in an innocent cicada killer wasp, not an Asian giant hornet. I shared that cicada killer wasps, although large, differ by being beneficial solitary wasps, not social wasps, and as such are not likely to sting or harm people. They do not have a queen or a communal nest to defend.

While I had the floor, I expounded on the amazing behavioral attributes of cicada killer wasps. Females each dig a burrow, usually in well drained, light textured soil, in full sunlight. The 1.5-inch diameter opening leads into an oblique tunnel that runs underground for 12-18 inches at a depth of 6-10 inches. Branching off of the main tunnel are small cells that she uses for nursery.

Then the female wasp goes on the hunt for its prey, a cicada. With pinpoint accuracy, it intercepts and administers a very precise, paralyzing sting (all while in mid-flight) before dragging the cicada to its burrow. Note that the unfortunate target is not yet dead, merely immobilized – sometimes continuing its incessant buzzing even while being dragged to the hole. The cicada killer wasp is astonishing, not only for being able to detect, catch and paralyze its prey while in flight, but also because of its ability to carry its prey, which is proportionally equal to or heavier than itself, to its burrow. Both amazing aeronautical feats.

Equally interesting is the reproductive behavior of the cicada killer. After stuffing one or more cicadas into each of the small nursery cells, the wasp lays eggs, then seals off the chambers. After 2-3 days, the newly hatched parasites each burrow into a cicada carcass and begin the slow process of devouring the immobilized, but still living, cicada. (Hey, I couldn’t make up this stuff. It is like horror movie material.) The larvae then pass the winter in their underground cells, to emerge the following summer as adult cicada killer wasps.

Male cicada killer wasps emerge first and mate shortly after emergence. They are territorial and so quickly check out anything moving in the area where they expect females to emerge – thus their apparent aggressive but innocuous behavior of buzzing and dive bombing. After explaining this to my son-in-law I pointed out that males are quite harmless; they do not possess stingers, thus cannot sting. I concluded by suggesting that he demonstrate his manhood and courage, not by nuking them but rather by reaching up and catching one midair with his bare hands, as this would surely impress bystanders, and he would then become a hero.

I think he is actually pondering his next encounter. (What I did not remind him of is the fact that, like most nonsocial insects, the male to female ratio of cicada killers is about 50–50. In other words, he would have a 50% chance of grabbing a female and getting stung – which if it happened would demote him back to the status of village idiot again.)

As for the rest of us, we need to know that the media-inspired buzz about large wasps is actually bigger than the bite. Cicada killers are beneficial wasps because they control cicada populations. Being big does not mean that cicada killer wasps are dangerous. They seldom sting people. Some complain of the unsightly mounds of soil kicked up by their underground excavating. Others wisely surmise that they occur too close to a sandbox where children play, the third base line on a baseball field, or other high human traffic areas to take a chance. In such cases cicada killers should be removed. This can be accomplished safely and effectively by directly applying a registered insecticide, preferably a dust formulation, into the tunnel entrance.

Alternatively, they might call my son-in-law to come remove them by hand.