The heat of summer is almost in the rearview mirror, bringing thoughts of apples, pumpkins, football and …. crickets. It hit me just now when I turned off the light to retire for the night – autumn temperatures also mean crickets. I can hear one right now, inside my house, annoyingly chirping its little beady heart out.

You may think that cricket chirping hardly warrants a column, but let me put this into perspective for you. Chirping outside in the yard is just fine. Indeed, it adds to the ambiance of the pending season. But when one or two of the little troublemakers sneak into my home and disrupt my peace and quiet, even my slumber, tension reaches a whole new level. That’s when crickets are no longer cute. No longer are they a welcome signal to a new season. Their loud intermittent, ear-piercing chirps are disruptive, annoying and unacceptable. Inside my house their trills reverberate off walls. My skull feels as though it could explode. There will be no sleep with them sharing my home. It has boiled down to either me or them … and I was here first.

This is the thing: I am an entomologist and have spent my entire career promoting insect appreciation, inclusion and toleration …..out of doors. But inside is my personal space. Once my teenage daughters left, my dues were paid. Now I control the noise levels here and will not put up with uninvited chirpers.

The moment crickets encroached this evening they put me in my primeval “hunt, seek and destroy” mode. No matter what I am doing, I immediately refocus, slowly stalking, listening. And when I locate their general hiding area, I’ll quickly kick boxes, shoes, furniture, and turn over anything that they could be hiding under to flush them out.  As soon as I see them run, boom, I will hammer down.

At least that is how I want it to play out. The reality is usually a bit different. I always pray that nobody is watching. Crickets tend to begin chirping the minute the lights go out but immediately stop when the switch is turned back on, or with the lightest floor vibration. I move softly, silently, ever so slowly, in stocking feet. But it never fails: When I get close to pinpointing their position, they go “radio silent.” I am left frozen, midstep, looking like the Karate Kid but dressed only in underwear and socks. A precarious and embarrassing position if observed by non-cricket hunters.

Yes, crickets are a smart foe. I will give them that. They win more often than not. They control me. I always switch to my offensive hunting mode with the next chirp. I can’t help it.

There are many species of chirping crickets. The two most exasperating home-invading crickets for most Americans are house crickets and field crickets.

Both belong to the insect order Orthoptera, which also includes grasshoppers and katydids. Like their relatives, crickets have very long antennae and enlarged hind legs designed for jumping great distances. In addition, adult females are famous for their sabre-like ovipositors at the tip of their abdomens, used for laying eggs in the soil.

When compared side by side, the house cricket is a lighter brown color, almost tan, approximately .75 inch in length; field crickets are almost black and noticeably larger, usually exceeding a full inch. 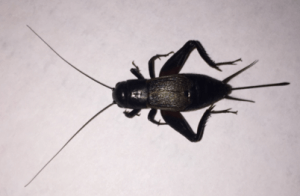 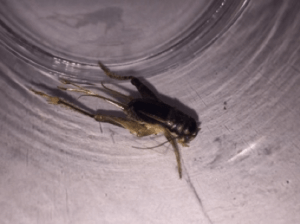 Both take 2-3 months to complete their life cycle and have no special overwintering stage, but they can survive cold weather in and around buildings, under leaf litter and in compost, where heat from fermentation may sustain them. Eggs are deposited wherever damp habitat is available.

Both crickets tend to enter homes when summertime temperatures begin to cool. Both are attracted to lights at night, but once inside buildings, they seek out warm, dark places to hide.

At times, crickets may damage field or garden crops, but they just as readily eat dead or living insects, including their own species. I know this because I captured two and put them in a plastic cup for a cricket family photo – only to discover a single survivor the next morning. That one sported a big Thanksgiving Day smile.

The chirping sounds for which they are famously annoying are made by adult male crickets rubbing their wings together. On the underside of each of the male cricket’s forewings are hundreds of microscopic teeth, made of hardened chitin. When the file-like serrations on the underside of one wing rub against the upper side of the opposing wing, a chirp is created.  The process, called stridulating, serves to 1) attract female crickets as mates, and 2) warn other male crickets to stay away.

The chirping noise is surprisingly loud, measuring in at ~ 80 decibels.  As reference, any sound at or above 85 is likely to damage hearing over time. Smoke alarms are designed to emit a very similar, high-pitched sound at between 75 and 85 decibels. Smoke alarms demand your attention, as do crickets.

An interesting side story came from an elderly lady who called, asking for my help trying to locate a cricket that had invaded her home. She had it tracked to a closet just off the living room but could not find the cricket, even though it chirped regularly. After an intensive and prolonged yet unproductive search over several days, she finally found the source. It was a smoke alarm with a low battery. The chirp noise was not a plea to attract a mate but rather a plea for a fresh battery.

A more serious yet bizarrely twisted story comes as one of the newest explanations for the purported international espionage case that occurred in Cuba beginning in late 2016. You might remember it. An article published by Sara ElShafie in Newswise (4-Jan-2019) sums it up this way.

Just two years ago, the U.S. Embassy in Havana was bustling with U.S. personnel to restore diplomatic relations with Cuba. Today it is nearly empty. In late 2016, diplomats started hearing a loud piercing noise. Two dozen of them reported symptoms such as ear pain and dizziness, and were diagnosed with injuries consistent with a concussion. Suspicions of politically motivated “sonic attacks” soon followed. The U.S. State Department recalled most personnel from Cuba, reducing its embassy staff in Havana to a skeleton crew. Cooperative measures between the two governments stalled amidst conspiracy theories of high-tech attack. Despite ongoing investigations by American and Cuban government agencies and extensive coverage of the incident by major news outlets, the source of the strange noise provoking the crisis remains an enigma.

But a recent scientific study suggests rather convincingly that this may not have been a sonic attack at all but rather … a cricket. According to Alexander Stubbs, an entomologist in the Department of Integrative Biology and Museum of Vertebrate Zoology at the University of California, Berkeley, the recording of the mysterious noise is actually the echoing call of a cricket. After scientific bioacoustics tests, performed in collaboration with a leading audio expert at the University of Lincoln (UK), they concluded that the sounds recorded at the embassy were consistent with those produced biomechanically by the Indies short-tailed cricket (Anurogryllus celerinictus).

Said another way, the embassy noises were not a sonic attack at all. The culprit, instead, was a particularly raucous cricket. Time will tell whether this study holds enough merit to rename the incident “The Cuban Cricket Crisis,” but for those of us who have had to deal with crickets chirping inside our homes, we are nearly persuaded.

Rather than calling out the National Guard when crickets invade, the best response for frustrated homeowners is prevention. Reducing moist habitats in and around your home can dissuade crickets. Mow the lawn, reconsider plant and flower beds next to the foundation, remove items on the ground, such as firewood, lumber piles or cardboard. Ventilate and dehumidify crawl spaces and basements. Crickets are attracted to artificial lights so consider changing to less insect-attractive yellow, LED outdoor lighting. The usual points of cricket entry into a home are open or poorly fitted doors and basement windows, cracks in foundations or broken siding. Sealing such entry points can be critical to preventing cricket infestations.

Once crickets are inside the home, your strategy will automatically change from defense to offense. Take it from me, when the lights go out, the only tactic that works is hunting them down. Take the battle to the enemy. Engage immediately, dressed as you are. Zero in on their position and flush them from their hiding places. Properly placed glue boards or a vacuum at the ready may help.

But don’t expect immediate success. You will, no doubt, find crickets to be particularly worthy adversaries, and you will gain new respect for them.  Perhaps they will even merit a high ranking on your “insects that are smarter than me” list. They are near the top of mine.