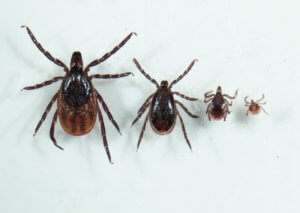 It is tick talk time, but when I say “tick talk” I am not referring to a timekeeping device, such as a watch or a clock. I am simply pointing out that spring is the best time to discuss ticks and their potential danger. I want everyone to be forewarned with the facts. So, now is the best tick talk time.

Most people have had the disagreeable experience at one time or another of finding a tick attached to their skin — or worse, finding them sucking their blood. These are never pleasant experiences, but tick dangers go well beyond just being a nuisance, well beyond being gross, disgusting and unpleasant, well beyond just the mark or the itchy welt that is left behind. Tick bites are potentially life altering.

Ticks transmit several very serious diseases to people as well as pets and other animals. It is important to know how, when and where ticks appear and how diseases are transmitted so that you can avoid them, prevent them from biting where possible and deal with them if they do bite. Talking about ticks now will increase your protection and peace of mind.

There are several different ticks and many tick-transmitted diseases, but I want to concentrate on one tick that transmits a rapidly rising and particularly insidious disease everyone should be aware of: the black-legged tick (Ixodes scapularis), formerly referred to as the deer tick. The contagion is Lyme disease, caused by a spirochete bacterium (Borrelia burgdorferi.)

Recent data from clinical and laboratory diagnoses estimate that Lyme disease infects about 300,000 Americans yearly, although only about half of the cases are medically diagnosed.

Lyme disease was first found in America near Lyme, Connecticut, in 1975 after medical researchers were alerted to an unusually large number of children from that area who were diagnosed with what appeared to be juvenile rheumatoid arthritis. The researchers discovered that most of the affected children lived and played near wooded areas where ticks were abundant, and that the children's first symptoms typically started in the summer months, the height of the tick season. Even before developing symptoms of arthritis, many also recalled finding an unusual skin rash near where a tick had bitten them.

The investigators’ next step was to test the ticks in the area to positively implicate tick involvement. Medical entomologists were called in, and they discovered that the smallest of the tick species found there (deer ticks) were indeed infected with bacteria they identified as Borrelia burgdorferi. When that bacterium was transmitted to people it was responsible for the characteristic arthritis-like symptoms. Additionally, it was found not only in children but in most anyone who had contact with the woods where the ticks reside. Because of where this study was done, Lyme, Connecticut, the disease was dubbed Lyme disease, much to the chagrin of the mayor and town council, who could not have been impressed that their city was to be forever associated with this disease. It hardly improved tourism in the area.

A flurry of activity began to determine more about the disease, how it is acquired, and ultimately how it could be treated and prevented. To answer these questions, the life cycle of the tick had to be mapped. This is what they found. 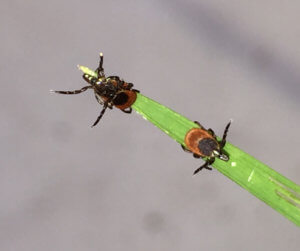 Transmission of Lyme disease involves a series of animals in addition to the tick itself. The life cycle of the black-legged tick can be thought of as including three feeding stages in its two-year life span: larva, nymph and adult. Each stage must take one blood meal before it can molt and advance to the next stage. We might also call the three feeding events breakfast, lunch and dinner — even though these meals may occur months or even a year apart.  Here is how it works.

Breakfast: Eggs hatch in the late summer or fall in moist leaf litter, usually in in a shady copse of trees. The tiny tick (called a larva), which is the size of a pinhead and has only three pairs of legs, attaches itself to and sucks the blood of small rodents, usually white-footed mice, that happen to live in the area. These mice are the only animals capable of harboring Lyme disease-causing bacteria in large enough concentrations to perpetuate an outbreak. We call them reservoirs. When the larval tick fills itself with infected blood it becomes a permanent carrier and is then able to transmit Lyme disease to any subsequent animal that it bites.

Lunch: After breakfast, the larva falls off its host and molts into an 8-legged nymph to remain dormant until early the following spring, when it begins actively searching for its next meal (lunch). If the tick was infected during breakfast, it will transmit Lyme disease at lunch. Nymphal ticks climb up to the tips of shrubs or long grasses to patiently wait for the next animal to brush by. For lunch, they target slightly larger animals, such as rabbits, raccoons, foxes or coyotes, but the odd human that wanders through the area is also fair game. Vibrations, heat and CO2 tell the tick when to drop onto the animal. From there it is just a matter of crawling up the body of the host, finding tender skin to attach to and begin sucking blood.

This is the most dangerous time for people because if a tick acquired Lyme disease at breakfast it will transmit it during lunch. What makes the nymphal tick especially treacherous is that lunchtime lasts all spring and summer, allowing plenty of time to find a person. In addition, nymphs are tiny — only the size of a poppy seed — therefore easily missed.

After lunch, nymphs molt yet again, this time into much bigger (sesame seed-size) adult ticks and remain active for the remainder of the fall and winter prior to climbing still taller vegetation, where they await even larger animals to pass by.

Dinner: Dinner is most commonly provided by white-tail deer (that’s why these were once called deer ticks). Blood proteins in deer are said to be the perfect size and density for the tick to reproduce most efficiently. Deer do not have access to tweezers, or fingers and thumbs, for that matter, thus they cannot pull ticks off. So by the end of summer they can be literally loaded with ticks. What this means is that, after deer dinner, large numbers of ticks are ready to drop to the leaf litter to lay up to 2,000 eggs each, starting the life cycle all over again.

What are we to learn from the black-legged tick life cycle that will help us prevent Lyme disease? People mostly acquire Lyme disease while walking in or near the woods during the tick’s lunchtime (spring and summer). If tick bites can be prevented then, chances of Lyme disease transmission will be reduced.

Remember — small tick but big health impact.  Because Lyme disease is caused by a bacterium it can be easily treated with an antibiotic. Sadly, if left untreated, it can cause permanent arthritis of large joints, cardiovascular problems, meningitis, encephalitis, and cranial nerve damage. It can really shatter lives.

Here are 10 tips for individuals who want to enjoy time spent out in nature but not join the ticks’ lunch group.

So, remember breakfast, lunch and dinner and apply these 10 tips to protect yourself from black-legged ticks and Lyme disease.

To help measure the value of Dr. Tim’s Spineless Wonders column I would appreciate your response to the following 3 minute Qualtrics survey (https://purdue.ca1.qualtrics.com/jfe/form/SV_80lLjR1IqqFleXr).  Thank you in advance.

← Fern is healthier than it appearsPaging Professor Phillips →
Scroll To Top