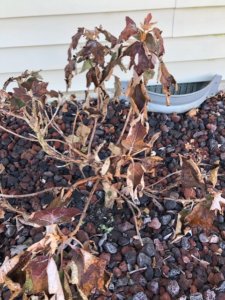 Q: Attached is a photo of our current hydrangea plant in front of our house. Should I cut it back now or leave it alone until spring? Or do you think it’s a lost plant? – R.G., Henry County, Indiana

A: A number of hydrangea species are grown in Indiana. The proper time of pruning depends on the species. Your photo appears to be Hydrangea quercifolia, more commonly known as oakleaf hydrangea, one of our native species. The foliage is shaped like an oak leaf, the plants are generally quite hardy and many have outstanding fall color as well as cinnamon-brown, peeling bark visible in winter.

Oakleaf hydrangea has showy blooms in late spring and early summer, and the buds are set on old wood, meaning they are already on the twigs. This species should normally be pruned as needed after blooming to remove dead/damaged twigs or thin an older overgrown plant. While this winter may certainly put its hardiness to the test, I would expect your plant to survive, though some dieback may be inevitable. Your plant looks fairly small and perhaps young, so for this year I would just let it be.

Some other species of hydrangea bloom on new growth each year. Those are the types of hydrangeas that can be pruned to the ground either in late fall or in late winter/early spring before the new growth begins.