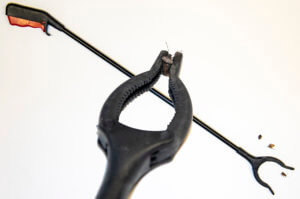 Some time ago I wrote a Spineless Wonders column about the invasion of stink bugs – specifically, the brown marmorated stink bug (Halyomorpha halys). I described what this particular stink bug looks and smells like, where it originated from, its current American distribution as well as when and why it is attracted to and gets into homes. I even discussed techniques such as sealing up cracks and entry points, repairing windows and doors to help exclude it from entering a home and why preventive pesticides on the outside of the home can help. I thought it was a pretty good treatise from which everyone could learn.

Feedback for the column was interesting. I quickly surmised from reader responses that everyone already seems to know what stink bugs look like, most have learned the hard way what they smell like, few people are interested in their life cycle or where they originated from, and virtually nobody really cares what their proper scientific name is. Everybody who responded already has them in their house and just wants to know how to get them out.

Based on what I learned from these responses, I am providing the following addendum specifically to the question “How to get them out of your house.” However, I still reserve the professorial license/right to tell you more than you really want to know. That is what professors do.

Marmorated stink bugs have heavily infested American west and east coast states and are a nuisance pest throughout the Midwest, from the gulf states into Canada. They appear around homes beginning in late September or early October, depending on weather conditions. They are most often first noticed crawling on outside walls and screens but eventually make their way into the home itself. Indoors they first appear occasionally on the ceiling, or a wall or window, but their numbers tend to increase over time and by November they may occur just about anywhere one can imagine. Their invading skills make them one of the most obnoxious and unwelcome home nuisance pests. What is worse is that they invade with the intent to stay for the entire winter. Once they have invaded a home they randomly resurface, especially on warm sunny days throughout the winter and early spring. For details as to why they do this, I refer you to my previous column. (See, I knew you would find that column valuable after all.)

Because of what I learned from reader responses and my promise of an addendum, I will focus the remainder of this column on how homeowners can remove them. I’ll first address some of the remedies bandied about on the internet and then, since everyone else is doing it, offer my own, unscientifically proven technique.

First, let’s discuss the concept of repellents. There are a lot, readily available online, that lack any scientific backing or validation. I am tempted to go out on a limb and say that most are bunk, will not work, are foolish and should not even be in print. However, I resist that temptation because America is a free country and everyone has the right of free speech – regardless of how wrong they may be.

The following are reasons why I think in-home remedies, touted as stink bug repellents, make little sense. First, they can’t be effective after the stink bugs get into the house. Why? Because, by definition, repellents act by driving away or warding off pests – but not killing them. In the case of stink bugs already in the living room, where would they be repelled to? Another room or another area in the house? They can’t get back outside because the doors and screens have pretty much sealed them in, and their itty-bitty brains have little chance of remembering what tiny crack they squeezed through to get in.

Second, you can’t outstink a stink bug. Even if noxious odors, said to repel stink bugs, worked, to what extent and at what cost in terms of collateral damage would more stink be worth it? Applications of ground-up garlic or mint or aromatic essential oils stink to high heaven – nearly as bad as the stink bugs themselves. To be effective, concentrations in the home have to be sky-high. Why trade one noxious smell for another? The only things that will be truly repelled by such smells are neighbors and friends who can consciously open a door and leave. Even a pet dog (with hypersensitive olfaction) can only raise a suspicious eyebrow at the applicator of these smells. It must wait to be let out.

Although widely advertised in magazines and on the internet, ultrasonic devices are ineffective for pest control. Our own tests have actually shown that insects are not repelled but can actually be attracted to the little, plastic, sound-producing boxes for nesting. Even mammals, which might actually hear the high frequency noise, seem to be, at most, annoyed, but not repelled. Baited rodent traps are equally effective whether placed adjacent to or far away from the ultrasonic noise. I marvel at the number of people who insist that rodents and all vermin are repelled by these gimmicks, yet have pet dogs (with hypersensitive hearing) perfectly content living in the house.

Be wary of recommendations that advise spraying arbitrary home products, such as hair spray, WD-40, soap, pepper, oil, vinegar, mouthwash, rubbing alcohol, or any other material not labeled or approved for use against insects. Directions for application are to squirt each bug directly and individually. Use of liquid spray bottles inherently means that there will always be an overspray spot on the wall, ceiling or curtain that remains to be cleaned up in addition to the bug IF it should actually die.

So if you are individually treating stink bugs when they randomly appear in your home, why not physically remove them? My recommendation is to dispatch and remove stink bugs as they are encountered. A vacuum cleaner with long hose or a cordless, hand-held unit can be effective but often induce the release of the foul stink bug smell inside the vacuum, rendering it off limits for a few days.

As I reflect on the conundrum, it seems easiest to just smash, swat or squish each stink bug as found, with a newspaper, fly swatter, tissue, or hand tool and toss, throw, flush or discard them in the trash or back outdoors.

I’ll even go one step further by offering my own unabashed endorsement of devices I found online called Extendable Grabbers, Trash Pickers, Nifty Nabbers, Reachers, Arm Extensions, Mobile Claws or Pick-up Tools. These inexpensive plastic hand tools can be readily found in stores or on the internet. I recently discovered that their 36-inch, extendable shafts with hand-activated jaws allow for picking up the smallest of items – including stink bugs, from hard-to-reach places such as high on walls or ceilings, behind furniture or on windows. They are ergonomic, lightweight, safe, comfortable, and effective. With such a device in hand, one can slowly sneak up on an unsuspecting bug from a distance far enough away to avoid the smell, then with the simple pull of a trigger, “snap,” the bug is caught and dispatched instantaneously. The grabber is so simple and effective that it not only can catch and dispatch but also remove the bug outside in one action – and with just one hand, freeing the other to open the door and let the dog out.

In conclusion let me say that I agree and empathize with you: It stinks to have stink bugs in your home. Rather than make matters worse, however, I suggest, for the following reasons, that homeowners avoid using insecticides to eliminate stink bugs. First, stink bugs are notoriously resistant to insecticides. Second, insecticides applied inside homes may unnecessarily expose residents (especially children) to their toxic effects. Third, if the stink bug dies, its death is not immediate and its corpse has to be found and cleaned up anyway.

So why not do the whole thing (catch, dispatch and remove) in just one step? You can do it quickly, cleanly, humanely and in a way that does not expose yourself to the odor that gives stink bugs their name or to the cost and safety concerns that are inherent with pesticides.

Keeping an extendable grabber close by will reduce the drama and the mess while increasing the efficacy of removing stink bugs from your home. I recently used mine to dispatch 16 stink bugs in 8.5 minutes. I lined them up on the deck railing outside just to admire my work. I call it “revenge dispatch satisfaction” and highly recommend it. It is therapeutic.