Valentine’s Day Strategies – Tips I have learned from insects 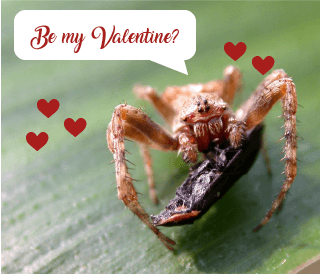 Valentine’s Day is nearly here so, as an alert to all guys out there who have significant others and want to keep them, do not forget February 14th.  It is pretty important to your relationship, and flubbing this one is akin to forgetting her birthday or wondering why she is not home and suddenly remembering that she was with you when you went to the mall. Every guy has done this once or twice, and Valentine’s Day is a time to make up for such blunders—if you handle it right.

I have found that insects offer a great solution to most human conundrums and may be a perfect Valentine’s Day role model. Insects are the most successful macro-organism on the planet. Sure, there may be many more bacteria and other miniscule organisms out there, but in terms of animals that we can identify with, insects are king. Scientists, who measure success in terms of reproduction, estimate that there are more than 200 million insects for every human alive today. That is a staggering statistic. Not only must we tip our hats to the insects, we must ask: “If courting and relationship development precedes mating and reproduction, is there something guys can learn about relationships and courting strategies from insects that might help us on Valentine’s Day?”

To answer this question let’s look into a few male insect mating strategies. Insects court each other in some of the same ways that humans do. For example, some male insects, such as flies, beetles, and butterflies, rely on appearance as a way to attract a female. Color and size seem to be the most important factors. Many species of male flies and butterflies sport vibrant and showy colors to attract mates. Male stag beetles sport especially large or ornate horns on the top of their thorax or sometimes overly huge jaws that may appear dangerous to humans but are actually so large in proportion to the insect’s body that they can’t even generate enough force to bite. They are functional only in that they give the insect an advantage in attracting mates.

Humans sometimes employ the same strategy. I am reminded of this when I walk through the weight room at the gym. Some guys spend an inordinate amount of time making themselves appear bigger and stronger than the next guy. You will note that I observed this as I “walk through” the weight room. I don’t personally spend much time there because there are less primitive strategies that are more effective for modern man and modern insects.

For example, a more sophisticated means of attracting a mate is through communication. Correspondence via love letters, either sent by social media or in the form of a valentine card, are part of a more enlightened human strategy. In the insect world, lightning beetles are masters at using love communication exchanges. Light flashes, in specific sequences, communicate important information by code. Pertinent facts, including location, species identification, sex, and interest in mating, are all part of this communication. A potential partner of the opposite sex replies with her own flash code. Such exchanges continue until the two lightning beetles physically find each other and continue their courting in person.

Insects also use auditory signals, almost always made by males and specifically for the purpose of attracting females. The chirp of a cricket is actually a love song made by rubbing its forewings together. Very loud at first, but curiously, once a female is lured closer and closer to him, his songs change to a more seductive, softer, courtship call. Humans can learn something from this technique.

Some male wood boring beetles tap out love songs by banging their heads against the ceiling of their tunnels. Females, next door, feel the invitation through vibrations in the wood, similar to the 1970s hit song “Knock Three Times”—on the ceiling if you want me, of course—and respond accordingly.  I’m not sure how this applies to most guys, but there you have it if you want to give it a try.

Insects are famous for using chemical smells to acquire a mate. French naturalist Jean-Henri Fabre discovered the power of insect smells in attracting mates. He called these pheromones. Females are especially adept at using mating pheromones and, in the case of certain moths, may emit scents powerful enough to attract mates from more than a mile away. Smells are also important in human mating strategies and, just like in insects, females are best at this. That said, males must also pay attention to their smells because failure to do so can really spell a Valentine’s Day disaster.

These are all important tactics that male insects (and humans) should consider. However, I would like to specifically consider the all-important technique of gift giving as it relates to Valentine’s Day success. Gift giving is a courting strategy that was not invented by people. Arthropods, including insects, have been giving each other gifts for millennia. In this strategy, it is the male that gives a gift to the female. Insect behavioral scientists call these “nuptial” gifts or, even more precisely, “pre-nuptial” gifts because they are given in advance of mating.

Knowing that gifts are important is easy, but choosing what to give is always the dilemma.  Flowers or jewelry or chocolates?

Males of a small species of fly called a “dance fly” give nuptial gifts that vary from nutritious prey items to non-food items such as a shiny stone or a unique leaf or a twig.

Most insects, however, stick to food. Male scorpionflies present dead insects to their females prior to mating. Food is always a safe choice as a gift because additional nutrition is important for future egg production.

Do animals, other than humans, ever fail in gift giving? The answer is very decidedly yes. Gift giving isn’t just about what you give but how you give it. Male spiders seem to know this and for them, presenting a carefully silk-wrapped bundle of prey seems to be the ticket. When the larger female spider accepts a silk-wrapped gift, mating begins. But the male needs to be quick about it because all spiders are predators and eat other arthropods—including members of their own family. The male’s gift has to be big enough to distract the carnivorous female during copulation because if it does not keep the female’s attention long enough, the female spider may attack and eat the male. The bigger the present, and the more tightly wrapped it is, the better his chances.

An interesting side note, however, is that in the case of both spiders and scorpionflies, gifts too big can also be a problem. Studies have shown that overly romantic suitors may have difficulty in carrying or flying with a very large prey item. In some documented cases, the delay that accompanies this transport often allows for a competing male with a more moderate-size gift to quickly slip in and woo the female away before the exhausted suitor with the big gift arrives.

Male arthropods also have been shown to employ cheap tricks, including wrapping low-quality prey or even the remains of prey that they have already consumed. Such an ill-advised strategy may fool the female for a short time but seldom ends well. Females have a way of discerning these tricks. I know this because of my studies in insect behavior as well as from my own gift-giving experience.

As a teenager, I astutely observed and noted the value of gift giving to a successful relationship. In preparation for one Valentine’s Day I purchased a very thoughtful gift for my then-girlfriend. It was music: the Bee Gees greatest hits album. I was so impressed with my selection that upon getting it home, I just had to show it to my brother, and … to play it for him, thinking that I could reseal it and wrap it afterwards. I discovered that my selection was good—in fact, so good that I could not give it away after all. I loved it and had to keep it. I resorted to  giving her something different.  It was of less value to me and apparently to her because the relationship did not last. Even worse, as fate would have it, my brother later married her and, for some reason, told her of my last-minute Valentine gift swap. She has never forgiven me and, in fact, still wants the album.

In summary, I think the Valentine’s Day tips that I have learned from insects will help you as well. Look your best, smell good, send love communications via songs, poems, messages and cards, either through the internet or by mail, and give gifts. I personally recommend an unopened box of chocolates.

Here is wishing you a successful Valentine’s Day.