Why Beetles Require a Thick Skin

One of our greatest social fears is to appear in public at a party wearing the identical dress or shirt or outfit that another person is wearing. Some say there could be nothing worse. “Same dress fear” is a foreboding that, even if conceived only in one’s imagination, can cause alarm, panic and, if left without proper therapy, a compulsion to carefully survey the crowd from a safe distance before entering.

Although all humans want to match to a certain extent, there also seems to be a limit. Conformity is good, but we want others to know that we are our own person.

If “same dress fear” is a valid reason for anxiety, consider my even bigger secret fear – that of running into my own doppelganger. For those of you blissfully dancing through life thinking you are unique, let me be the first to inform you that, according to those who know, at least one other person in our world of ~7.594 billion people looks just like you. Call them your lookalike, your double,  your mirror image or your apparent clone, the truth is that you have a doppelganger somewhere out there, and bumping into them may be your worst fear come true. I don’t know how to explain this fear to identical twins – they don’t seem to, um, relate – but to average, non-biologically related doppelgangers, meeting each other could be a traumatic, life-changing, physiologically upsetting event. I think there could be nothing worse.

But if meeting your doppelganger is reason for distress, consider for a moment the life of a beetle, whatever species you choose. They not only have their own doppelganger but they live among hundreds of thousands of them. They all look exactly alike. They all act exactly alike, too, as far as we can tell.

They must truly dread going to big parties, or they must have a very thick skin to be able to live in such a world.

Well, it turns out that beetles do have a thick skin, and a hardened skin, which allows them to survive in their world. Insects have what is called an exoskeleton (exo meaning on the outside). An exoskeleton is a characteristically arthropod, anatomical feature that supports and protects their bodies. By contrast, vertebrate animals, including humans, have an endoskeleton (endo, meaning inside) skeletal system made of bones that support their bodies and allows them to stand up and move about and act alive rather than just melt in a pool of lifeless flesh like a teenager in front of a TV. Insects move because their muscles attach to the rigid exoskeleton positioned on the outside of their bodies, whereas people muscles attach to hardened bones on the inside of the body. Otherwise, endo and exo skeletons are functionally quite the same.

The big difference lies in the outer covering or the integument (also called skin).  In both people and insects, the integument serves as a critical interface between the internal body and the environment. It prevents the entry of harmful microbes or chemicals, serves as a site of sensory input, helps to maintain ionic, water and temperature balance, and generally just helps hold everything inside the body from spilling out.

It happens that the integument is the largest organ of an animal’s body. This comes as a surprise to many, not just because of the purported size but more because skin is classified as a body organ at all. It does not fit in our usual categories of internal organs, such as the heart, liver or brain, but is considered  an organ because it is composed of a group of tissues that fill a unique purpose – the definition of body organ.

Integument or skin is our largest organ. It encompasses our whole self, head to toe. If we were to shed it like a newborn’s sleeper and spread it out as a tablecloth, it would cover more than 20 square feet of area, the size of a family-size kitchen table, and enough would be left over to make a spare for special holiday occasions.

So, you ask, what of the skin of a beetle? Well, that is a great question and I am glad you asked because it leads to the rest of my column. Beetle integument is no less impressive by size, albeit proportionally much smaller. In fact, it would require 25 average beetle skins to make a coaster for the table. Such a coaster, by the way, would be tremendously strong and very resistant.

Part of the integument of both insects and people consists of a rigid, non-living layer that we call cuticle. Fingernails, for example, are hardened plates of human cuticle that serve to protect our digits from abrasion while digging in the dirt, and occasionally from an errant swing of a hammer. Insects also have cuticle but what is exceptional is that they have, by proportion, much more of it. And to achieve maximum rigidity, the outer layer of beetle cuticle is reinforced and impregnated with cross-linked protein materials called sclerotin.

Such hardened cuticle protects beetles as they burrow through soil or dig into wood that might otherwise scratch and tear up their integument. In fact, as a group, beetles are best recognized for having developed a very rigid, sclerotized front pair of wings that serve not for flight but for covering and protecting their flight-functional rear wings, which, of necessity, are light, translucent and very fragile. Without such protective wing covers, the functional wings would be torn to shreds in the unforgiving habitat and fossorial lifestyle of most beetles. The protective wing covers of which I speak are properly termed elytra, and are composed mostly of hardened cuticle. Elytra are a characteristic morphological insect feature most highly adapted in beetles. They are also what affords the characteristic, but unexplainably fulfilling, crackle/crunch sound our non-entomologist friends experience when they stomp on them while crossing kitchen floors and sidewalks.

Beetles’ hardened and waxy cuticle also protects them from desiccation – a real potential threat to small animals the size of an insect. Beetles employ cuticle nearly everywhere across their body, from legs to wing covers, to head and mouth parts. Because hardened cuticle is inflexible, beetles labor at agility. They are not cut out for gymnastics. The only places not covered in cuticle are the joints and between cuticle plates, in barely sufficient amounts to allow beetles to move. They are truly living, miniature, lumbering suits of armor.

But being covered in cuticle seems to be the ticket for beetles and has allowed them to become more numerous than any other group of insects – which is to say a lot. They are said to be the dominant insect life form on earth. One of every five living species is a beetle.

A secondary, but much appreciated, side benefit of insect cuticle is that it allows beetles the honor of being the most colorful and iridescent animals in nature. (Some of my butterfly enthusiast friends might disagree with this ranking but actually favoring butterflies over beetles makes them suspect in the first place, so their opinions are seldom seriously considered in entomological circles). 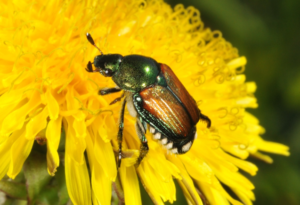 A layer of differentiated pigment, glittered with tiny, flattened prisms of insect cuticle oriented in multiple directions, tends to bend and reflect incoming light in magical and dazzling ways. This provides the famously spectacular iridescent colors of many beetles. They are adorned like no other animal on earth.

But such beauty does not mean that beetles do not fear going to a high school prom because having a genetically determined exoskeleton and integument means that all members of the species must look alike. All identical. All the very same. It would be like living in a whole world of doppelgangers. They would all need a thick skin.

So, if you think meeting your own doppelganger would be bad, imagine living as a beetle amidst millions who look and act just like you.

It would throw the public school system into a frenzy. Teachers would not know which student is which; playground supervisors would go mad trying to be sure that everyone had a turn at the slide. Law enforcement would become a mess; convictions would rise exponentially as witnesses would be obliged, in good conscience, to finger everyone in a police lineup.

Families would be affected, especially stressed-out moms who can hardly keep their kids’ names straight even when they do not look alike. Family reunions would be chaos, although a lot of money would be saved by not having to buy embarrassing, lookalike T-shirts. Movie plots would be hard to follow. Graduation photos and drivers licenses would be meaningless.

The only real positives I can imagine in a society full of doppelgangers is that the potential for hilarious practical jokes would be near endless and if you were a beetle, your world would be full of brilliant, stunningly colored duplicates, each accented with iridescent metallic blue, green, purple and gold. Even if all alike, it would make for a beautiful world.