Why Insects Don’t Have Wheels

The other day I found myself pondering one of life’s biggest entomological questions. Pondering is not an uncommon activity for me. A large part of my job is to think. I spend a good part of most days thinking, sometimes up to 16 hours. Purdue University pays my salary on a yearly basis, probably because it could not afford to pay me hourly. I once tried to explain this to my department head. Like you, he was amazed. His jaw dropped and he could hardly respond. Lots of people seem to be astounded by how much thinking I actually do.

The question I was contemplating was this.  Why don’t insects have wheels? I was in my office, staring out the window. It was the beginning of another semester on campus. Students were all around, bustling every which way to get to their next class. What struck me was how many of them had wheels. Wheels of all sorts, shapes, and sizes underpinned nearly every conceivable personal transport imaginable.  From roller blades to skateboards, scooters of every different kind, bicycles of various shapes and sizes, some with motors, some with pedals, some with both – but all had wheels. Some with enlarged wheels and some with tiny wheels.  Some with two wheels, some with three, some with four, and I even saw one dude on an unstable unicycle. Pedestrians wisely gave him a wide berth.

Some wheeled conveyances were for rent, some privately owned and who knows how many were shared by any number of students. There were wheels of all kinds transporting students every which way. I saw a student in a wheelchair, a professor dragging a wheeled suitcase, likely full of books or papers, a cart full of assorted glassware being wheeled by a laboratory technician in a white coat, probably from one lab to another. The one thing all these had in common was their basic principle of locomotion: the wheel. Mere yards away, on the main road, were more wheels of yet different sizes, shapes and sounds; cars, trucks, and motorcycles. Wheels move a lot of people and things in our world today.

Regular readers of this column know that insects are incredible in myriad  ways. No other class of animals has mastered transportation and movement like insects. From the standpoint of locomotion evolution, insects are king. Insects can wriggle, walk, run, hop, jump, climb, dig, burrow, swim, bore, float, skate, dive and even fly. Yes, insects have mastered flight.

Names often reflect a specific form of locomotion: walking sticks, grasshoppers, water striders, rock crawlers. There are burrowing, tunneling and even boring insects, such as stem and wood borers that move around in substrates as hard as soil or even solid wood.

Insects have conquered aquatic habitats. Water striders have developed the ability to actually walk, or more correctly, skate on the surface of water by capitalizing on the principles of high water surface tension by employing long, hydrophobic legs. Others swim as wigglers, tumblers, or employ paddle-like legs used for every swimming stroke imaginable. Some are even called backswimmers – showoffs! Others have mastered SCUBA (self-contained underwater breathing apparatus) techniques; the diving beetle collects and utilizes a bubble of air around its body, including its breathing pores, to allow it to stay submerged for long periods of time. Others have evolved a technique called “discontinuous gas exchange” that allows them to recycle the oxygen in their body rather than lose it in respiration through constant breathing.

Only a comparatively few animals have evolved the ability to fly, notably birds, bats and maybe a few others if you are willing to accept gliding as a form of flight. The number of birds (~9,000 species) that can fly pales in comparison to the ~120,000 species of flying insects. One whole group (order) of insects has even earned the right to actually go by the name “flies” because of their mastery of flight dynamics and speed. Some are well known –think housefly and horsefly – but others go by rather comical names, such as balloon flies, bot flies, dung flies, crane flies, fruit flies, humpbacked flies, long-legged flies, robber flies, rust flies, soldier flies, snipe flies, stalk-eyed flies, tsetse flies, window flies and even the slightly embarrassing moniker thick-headed flies.

Flies, as a group, are not the only insects that fly. Thousands of beetles do it. Dragonflies and butterflies are well known for their prowess in the world of flight –dragonflies being the fastest, clocking in at 35 mph –but moths have been known to splatter on jet plane windshields at altitudes in excess of 20,000 feet, and butterflies are famous for migrating thousands of miles.

Yes, insects have truly mastered locomotion. Evolving unique biomechanisms for all of these methods of locomotion is certainly one reason insects have become so successful as a group.

Insects have been around for a very long time, even hundreds of millions of years, according to the fossil record. The advantages of wheels would have made insects even more efficient. Clear advantage and unlimited time begs the question, why has insects’ evolutionary biology NOT come up with wheels? Why don’t we see a single rudimentary insect wheel in any corner of the fossil record?

Some might argue that wheels are such a huge deviation from a working biological leg that it might have been too big of a morphological evolutionary step. But then I think about the first insect that decided to sprout a wing out of its epidermal exoskeleton, hook on some internal muscles, affix some nerve ganglion to the brain and begin flapping its way at great heights, scary speeds and long distances around the world. Wheel development seems like small potatoes in comparison. 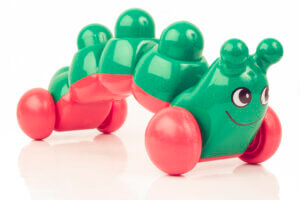 Absence of insect wheels is certainly an evolutionary conundrum, for which I could not readily come up with an explanation without heavy-duty contemplation on the matter. After puzzling for a considerable period of time, the length of which even my department head has not brought himself to ask, I finally have the answer.

Note: Scientific breakthroughs like this answer are the reason I always tell my students, “No matter the problem, if you put your mind to it, think hard enough, long enough and intelligently enough, you will come up with an answer. It may not come all at once but, it WILL come.”  I’ll remember to use this case as an example to inspire them.

I have deduced that insects do not have wheels because (drum roll, please) there are no insect roads. It seems pretty simple, but let me explain. To work properly, a wheel needs a road as its counterpart. Preferably a flat, smooth, horizontal road without potholes. Insects clearly have not thought about this. If insects created roads first, then perhaps insect wheels would have naturally evolved.

Consider the evolution of wheeled transportation in America. Animal paths through the forest became dirt roads for horses, and then wheeled carts, then buggies, and then the Oregon Trail and even bigger wagons and ultimately our transcontinental network of paved highways. And the better the road, the more carts, bicycles, trains, and especially automobiles have evolved. Just think of where a train might be without a proper track. Likewise, a wheeled automobile would have been of little value before the advent of the road.

The success of the automobile began not with the invention of the wheel but with a proper road. Road development instigated the proliferation of the wheel for locomotion. Humans got a shovel and pick and constructed roads first. Then came cars and trucks.

Insects, on the other hand, don’t work much with tools. And until they can pick up a shovel, they probably won’t be able to make a road worthy of a wheel. Unfortunately, insects can’t make roads, and that is why insects don’t have wheels. It is that simple.

I know what you are thinking. Regrettably, there is presently no Nobel Prize for scientific entomological thought, however astounding it might be.

I’m off now to explain my findings to my department head. He will be impressed beyond words. I can see it now. His eyes will roll back and his jaw will drop but he will not be able to find the words to express his amazement. I just wish that he would remember this cognitive breakthrough at annual raise time.